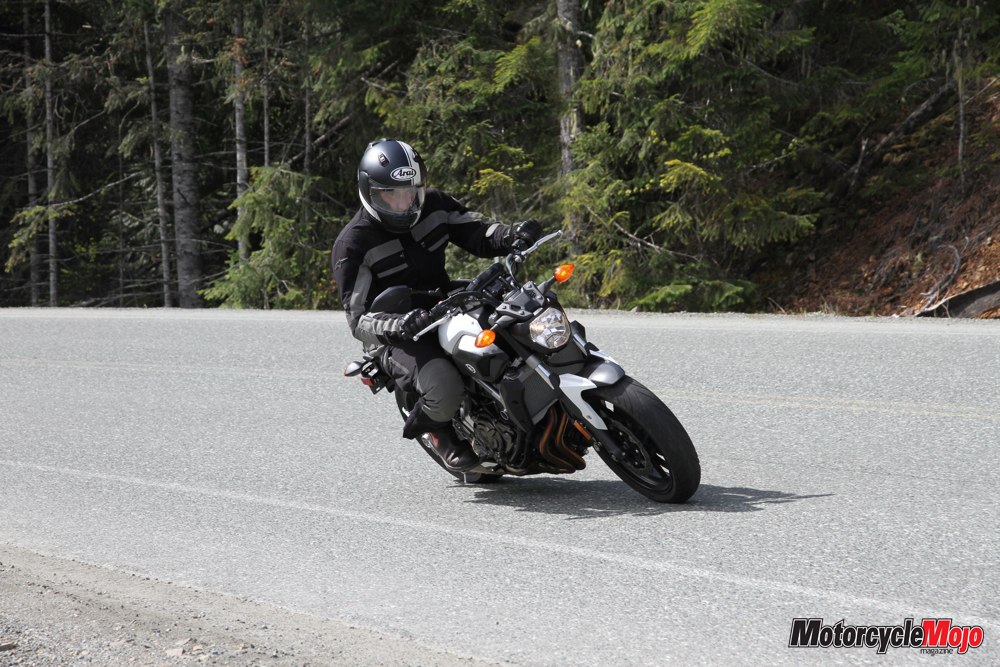 It’s really unfortunate I don’t get to the west coast of Canada more often. The scenery is magnificent, with cascading mountains plunging sharply to meet the Pacific along the coastline of British Columbia, (all the way from Alaska to Washington). And while the rest of the country has been experiencing an extended deep freeze this spring, it’s been warm over there!

If you prefer a more condensed version of the beauty that is B.C., look no further than Vancouver Island. Measuring 460 km long by 80 km wide, it’s a fairly large chunk of real estate. Yamaha chose the city of Courtenay, located halfway down the east coast of the island, as the location for the launch of the FZ-07, an early-release 2015 model. 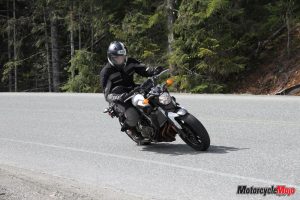 In a field populated by the BMW F800R, the Suzuki SFV650 Gladius, the Kawasaki ER-6n and the Honda NC750S, there’s always room for additional lightweight, nimble and affordable motorcycles. The FZ-07 promises to be the lightest in class, tipping the scales at just 180 kg wet. That’s 24 kg lighter than the ER-6n, 22 kg lighter than the Gladius and even 13 kg lighter than the smaller CB500F.
It bears a distinct family resemblance to its larger FZ-09 brother, with which it shares some styling cues, like the low, angular headlight, humpback fuel tank, wedged tailpiece and low-mounted, shorty exhaust. Plastic panels cover the metal fuel tank, which would make damage repair easy and inexpensive in case of a tip-over.

Yamaha chose to bring the FZ-07 into Canada at a price advantage over the competition, as well as offering an affordable move for riders trading up from bikes like the Honda CBR250R and Kawasaki Ninja 300. At $7,299, it undercuts its middleweight rivals by at least a grand. The trade-off for this low price is that there’s no ABS available, not even as an option. Other cost-cutting measures include resorting to the use of a tubular steel frame. It’s a very rigid item, nonetheless, while weighing 5 kilos less than the frame on the FZ6R. The swingarm looks like it’s made of aluminum, but in fact it’s stamped, welded steel. Wheels are 17 inches front and rear, and on the rear is mounted a supersport-spec 180/55ZR17 tire, wider than most of its classmates, except for the F800R.
Power comes via an all-new, liquid-cooled, 689 cc parallel-twin. The new engine produces 75 horsepower and 50 ft-lb of torque. 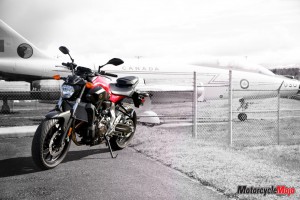 Horsepower is comparable to the Gladius, and about on par with the FZ6R, though the FZ-07 produces about 6 ft-lb more torque than the latter. The FZ-07 feels quite muscular, because inside its crankcases is a 270-degree crankshaft, giving the engine more bottom-end torque than a conventional 360-degree crank (and more than the FZ6R’s inline-four). The crank, which Yamaha calls a “crossplane concept,” also gives the FZ-07 the exhaust cadence of a 90-degree V-twin, so it even sounds a bit like the Gladius. There’s good news for maintenance-minded riders: Yamaha claims 40,000 km valve-adjustment intervals.

We departed in the morning, heading north on Highway 19 out of Courtenay before turning west onto the tighter Highway 28 toward Gold River. Along the twenty-minute stretch of the northbound divided highway, the FZ purred along in counterbalanced smoothness, with only a light throbbing coming through the seat and handlebar, not even enough to blur the mirrors. From the saddle, the FZ-07’s engine feels very much like Suzuki’s 650 V-twin, and that’s a very good thing. It has a linear powerband that starts pulling smoothly, yet forcefully, from as low as 2000 rpm. Power is easily controllable, which will inspire confidence in newer riders with inexperienced throttle hands. Let the revs build up to the indicated 10,000 rpm, however, and even an expert will find the FZ-07 a gratifying machine to ride. Revs build in a linear manner, while sinking you into the passenger seat hump with every gear change. Light clutch and gearshift effort make rowing through the six-speed gearbox a completely carefree affair, even if you don’t need to shift often, due to the engine’s wide, flat powerband.

The riding position is typical, naked-bike upright, with a relaxed, slightly forward reach to the handlebar, though the foot pegs are as high as I’d like them as a six-foot rider. Because its headlight is mounted so low, you get the impression that something is missing from the front end when you look down. But you will see a comprehensive LCD display. It includes a bar-type tachometer, speedometer, dual trip meters with fuel-reserve countdown, clock, gear-position indicator, ambient temperature, and a fuel-economy computer. Altogether, it’s quite a complete display for a bike on a budget. There’s even an ECO indicator that lights up at light throttle settings to let you know you’re saving fuel. Claimed fuel consumption is 4.1 L/100 km, which would give the FZ-07 a theoretical range of about 340 km from its 14-litre gas tank. Oh, and it runs on regular fuel. 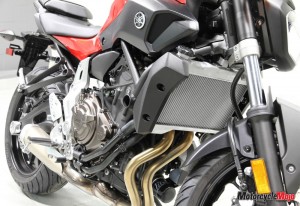 Turning west toward Gold River onto Hwy 28, the road tightens up, and here the FZ powered through turns predictably, with an easily modulated throttle. Steering effort was light, and the bike exhibited surefooted stability through the high-speed sweepers that flowed through the desolate, yet beautifully picturesque Strathcona Provincial Park.

Another area where Yamaha saved a few bucks is with the suspension components. There’s a conventional, 41 mm fork and single, linkage-type shock, but adjustment is limited to rear spring preload. Suspension compliance should be adequate if you are of average weight, say about 170 pounds, but for a heavyweight like me, coming in at about 220 pounds in full riding gear, the rear is simply under-damped. The rear would rebound quickly and bounce a couple of times after hitting a dip in the road. Fortunately, the taut chassis kept the bike in line through sweepers despite the soft damping, though if you’re full-sized like me, it might be a good idea to invest in an aftermarket rear damper when one becomes available. It’s by no means a deal-breaker though, and only an issue with a heavier rider at an elevated pace, or when carrying a passenger.

We arrived in the town of Gold River for lunch, and by then the temperature was well into the mid 20s and the sun was shining, a refreshing break from the early-season, east-coast deep freeze. After lunch, we headed to the end of Highway 28, where you’ll find only a floatplane and a logging company. From there, the only way out by bike is backtracking on Hwy 28, otherwise you can take a boat along the Gold River to Bligh Island and then onto the Pacific, or fly out. One of the more unusual sightings in the area was of a vehicle made from the front half of a pickup. A metal frame extended from its front bumper, with wheels at the far end. We were told that this push-me-pull-you of the wheeled variety was used to pull floatplanes out of the water. I’m sure it was at least as useful as it was unsightly.

Long-term comfort proved fine while heading back to home base in Courtenay, and although the seat is narrow at the front to allow for an easy reach to the ground, it widens considerably at the rear and doesn’t slope forward, which is conducive to rider comfort. It is, however, firm, and your backside begins getting numb after about an hour.

The FZ-07 is a welcome addition to the middleweight motorcycle market, offering nimble handling and contemporary styling. It makes a great city scrambler, as well as an effective back-road carver in the right hands. And best of all, its affordable price almost assures it will be a hit in showrooms, among beginning riders and experts alike.