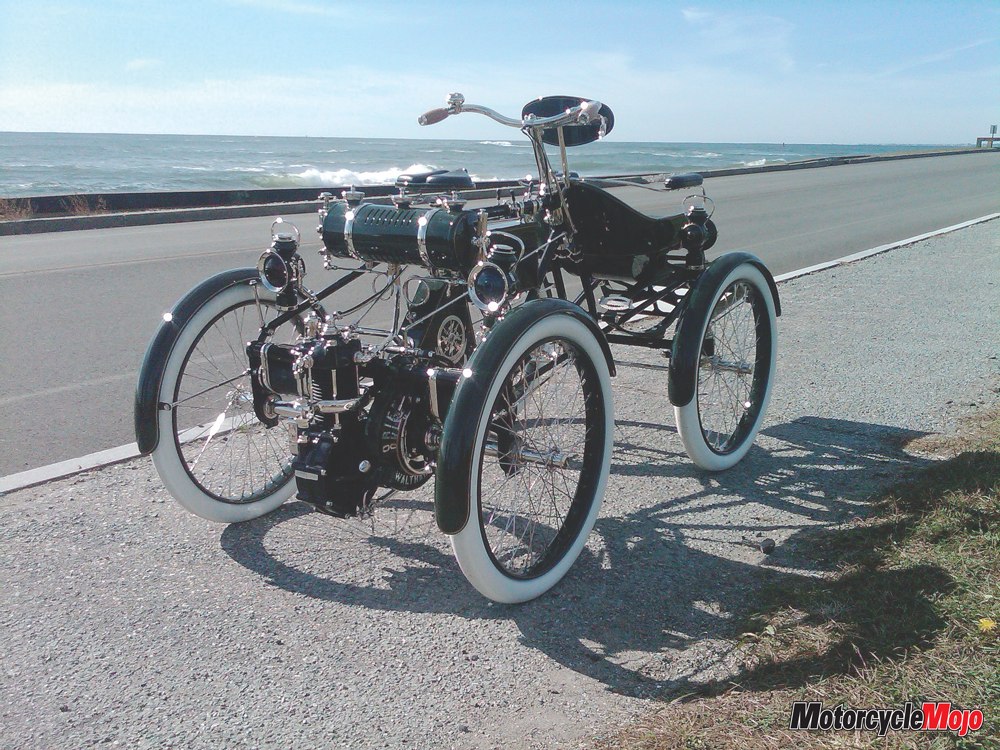 Pioneers in the world of internal combustion engines, De Dion-Bouton developed three-wheelers before becoming the world’s largest auto manufacturer — for a moment

The oldest known running motorcycle in North America is an 1897 De Dion-Bouton, a tricycle built by the French firm of De Dion, Bouton et Compagnie. The 115-year-old Orient Autogo trike featured in this article, one of about 100 built, is an American-made relative to that machine. It, too, is powered by a De Dion-Bouton 4-stroke, single-cylinder engine, and is also one of the oldest still-running motorcycles on the continent. 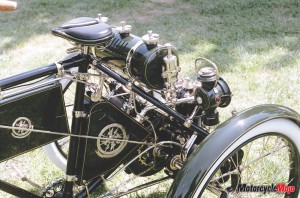 Count Albert De Dion was a wealthy French nobleman and a steam enthusiast, though initially of steam locomotives. In 1881, after spotting a model steam locomotive in a shop window, De Dion approached toy-making engineers Georges Bouton and Charles Trépardoux to ask them to build him a similar miniature steam locomotive.

Bouton was a steam engineer and Trépardoux had long dreamed of building a steam-powered car, but sadly the duo lacked the financial means to act on the idea – that is, until they met De Dion. In 1883, the three formed a new company, De Dion, Bouton et Trépardoux, set up shop near Paris, and in no time began building lightweight steam engines to power cars. For a short while, the De Dion-Bouton car company became the largest car manufacturer in the world.

By 1889, De Dion was convinced that the days of steam-powered vehicles were numbered and that the evolving 4-stroke gasoline engine would displace them. This led to growing friction between De Dion and Trépardoux, an avid believer in steam-powered cars. When, in 1894, the company switched to the use of internal combustion engines, Trépardoux resigned.

The following year, De Dion-Bouton built their first 137 cc, single-cylinder engine. Initial teething problems with the engine – rough running and thrown bearings – were overcome when Bouton raised the engine’s design speed from 900 rpm to 2000 rpm. The new engine hit a peak rpm of 3500, which was a groundbreaking development for motorcycle design. 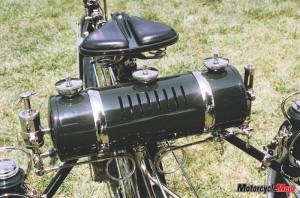 The De Dion-Bouton single featured overhead intake and exhaust valves, the intake being an automatically operated inlet valve, while the exhaust was mechanically operated. De Dion innovations included the use of aluminum-alloy engine cases, to which the upper cylinder and head were attached using four long bolts. The cast-iron cylinder was radial-finned, and a fan was used to assist with the air-cooling. The engine also had twin flywheels, one attached to each end of the crankshaft.

The fuel-intake system employed a surface carburetor that consisted of a large tank partially filled with gasoline. Air entered the tank from above and, thanks to engine intake suction, rushed across the surface of the fuel, picking up gasoline vapour and flowing the air/fuel mixture into the cylinder.

Initially, the ignition system was of the hot tube variety that could lead to engine fires, especially if the bike was crashed. Bouton was quick to recognize this shortcoming, and replaced it with a total-loss electrical ignition system using a rudimentary spark plug ignited by a battery and coil.

These engines were all straight-drive units (no transmission) and transferred the engine’s power directly to the rear wheels via gears.

The De Dion-Bouton single is generally regarded as the world’s first lightweight, high-speed internal combustion engine. Its layout became the standard engine design of its period. With a 50 mm bore and a long, 70 mm stroke, the engine produced 1.3 horsepower, and delivered good overall performance.

The company’s first gasoline-powered motorcycle was a tricycle, selected for its greater stability and control in preference to the uni-track, two-wheeled alternative. The trikes were built out of light steel tube, and bore many similarities to bicycle frames.
The engine was attached to the frame behind the rear axle, with direct drive to the axle. The frame was rigid, with a sprung saddle and bicycle-type steering, with some additional cushioning provided by the recently invented Michelin pneumatic tires. The fuel tank was placed crossways behind the rider’s saddle, while the large surface carburetor, attached to the saddle-frame downtube, was located below the rider and forward of the engine. 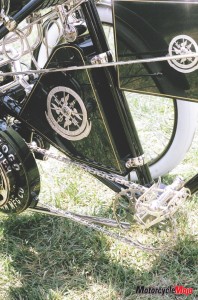 The engine was pedal started like a modern moped, with small lever controls for the fuel and air intake attached to the top frame tube, forward of the rider. A third small lever, also attached atop the upper frame tube, enabled the rider to vary the spark advance, and a small compression release made it easier to turn the engine over for starting. With atmospheric valves, a surface carb and no jets, there was no engine throttle per se – the only direct rider control to modulate speed was the solitary brake lever.

The De Dion-Bouton trike came onto the market in 1896 and was an instant hit. Even more of a hit was the firm’s single-cylinder engine, which was eventually licensed for use by well over a hundred firms worldwide, and copied by many others.

On the other side of the Atlantic in 1893, a man named Charles Metz founded the Waltham Manufacturing Company in Waltham, Massachusetts, just outside of Boston, and began producing lightweight bicycles which he named “Orient.” Metz’s bicycles sold well, and soon became the preferred mount of many bicycle racers. It wasn’t long before the brand was one of America’s top sellers.
In 1898, Metz built a motorized tandem bicycle to be used as a pace machine for the company’s bicycle-racing team. One rider would steer the bicycle, while the second operated the motor. The Orient Tandem Pacer, as it was referred to, was powered by a De Dion-Bouton engine.
Metz was impressed by the French engine, and ultimately became the exclusive U.S. importer for De Dion-Bouton engines, tricycles and other vehicles.
Metz hired famous French bicycle racer Albert Champion to head up his bicycle-racing team in 1899. That same year, he announced that the Waltham Manufacturing Company would begin building its own motorized vehicles under the name Orient.
This was the Orient Autogo Tricycle, which drew extensively on the De Dion-Bouton design and was powered by a De Dion-Bouton engine. By then, the French firm had begun to build larger, more powerful liquid-cooled engines, and Metz selected the 2.25 horsepower version for use in the Autogo. These engines are variously quoted as displacing either 185 or 200 cc.
Albert Champion began racing the Autogo vehicles with some success, and improved the bikes’ electric ignition system. In Chicago on September 25, 1900, Champion set a world speed record for the mile at 1 minute 18.6 seconds, or 73.74 km/h.

Champion ultimately left Waltham, moving to Flint, Michigan, where he worked for General Motors for a while before setting out to run his own companies. Champion was the founder of both the A.C. (his initials) Spark Plug Company and Champion Spark Plugs.

Meanwhile, Metz had developed a four-wheeled variant of the Orient Autogo. The Autogo could be ordered as a motorized trike at a cost of $450, or for a further $150, could be supplied with an optional Forecar kit, which converted the trike to a four-wheeled vehicle. The conversion kit, which could be quickly installed, replaced the trike’s front wheel assembly with a twin front wheel setup and a seat for a passenger, which was located ahead of the rider and placed above and between the two front wheels.

Metz, like Champion before him, also fell out with the company’s investors and left Waltham in late 1901, forming a new company, which four years later merged with the American Motor Company to build Marsh motorcycles.

Today, only two Orient Autogo trikes are known to exist. The one featured in this article was purchased by its current owner, Dennis Carlson, from eBay in 2005. At that time, it was in absolutely decrepit condition.

Carlson’s Orient had originally been purchased by Bostonian Arthur W. Dewey, a cousin of the famous American Admiral Dewey. It was kept aboard Dewey’s yacht in quadricycle form and used as land transport during his various travels.

The bike later became the property of one Henry Schouler, who, after a possible attempted theft of his machine, disassembled it, placed the various parts in canvas bags, and then buried them on his farm in Massachusetts. There they remained for almost 50 years.

The machine was later located by Schouler’s stepson, with the use of a metal detector, and exhumed. While 80 percent of the machine was restorable, the remainder was either destroyed or damaged beyond repair.

The job of bringing the Orient back from the dead took Dennis Carlson about seven years. Tracking down information about the Orient Autogo and its historic engine proved to be an exhaustive and time-consuming undertaking. The engine in his machine turned out to have a 70 mm bore and stroke, for a total displacement of 270 cc.

While some of the missing OEM parts were successfully located, many of the other rusted-out components, including the wheels, rims and surface carburetor, had to be custom fabricated. This in turn entailed either tracking down pictures of the missing items and/or consulting with experts in order to ensure that the newly made parts remained faithful to the manufacturer’s original design, dimensions, appearance and finish.

His biggest help in this regard was discovering a third Orient in Hamburg, Germany, which was fully original and could serve as the basis for his restoration and fabrication work. Sadly, that third Orient trike was recently reported destroyed in a fire.

Carlson got outside help when it came to the Orient’s final paintwork and other cosmetic detailing. The machine’s extensive nickel-plating work was carried out by The Finishing Touch Incorporated and master craftsman Mark Silich in Chicago.

Luckily for Carlson, his eBay purchase included the original Orient Forecar kit. This, the last one known to exist, was also fully restored and finished in pristine condition. Its addition raises the machine’s overall weight to about 136 kg and restricts its top speed to about 40 km/h.

Having the conversion kit enables Carlson to display his immaculate machine as both a powered tricycle at motorcycle events, and also as a pioneering four-wheeler at historic automobile gatherings. Needless to say, wherever he takes it, crowds of curious admirers quickly gather around and begin peppering him with all kinds of questions about his unique and intriguing machine.