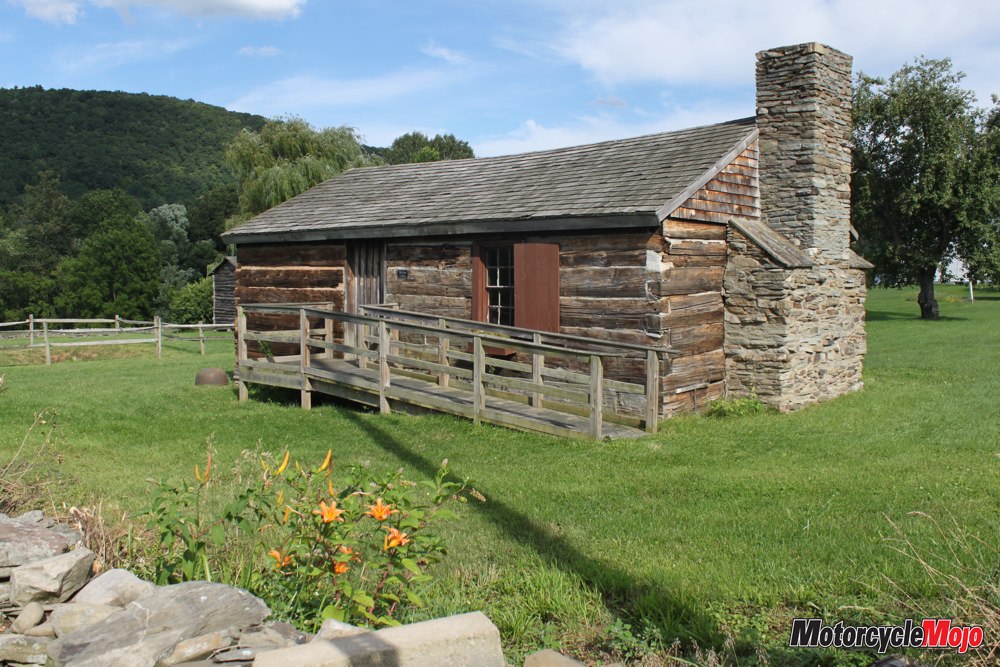 The Grand Army of the Republic Highway is the longest transcontinental highway in the United States, and one of its most entertaining stretches runs across the mountainous regions of northern Pennsylvania

The Allegheny Plateau, which comprises most of the north and northwestern parts of Pennsylvania, is covered with lush forest and mountainous terrain known as the “Pennsylvania Wilds.” Traversing this striking landscape is the Grand Army of the Republic Highway, PA Route 6, and our destination for a few days of riding. 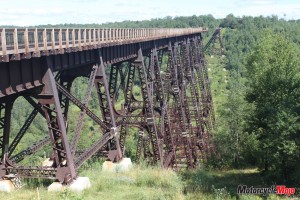 Sweeping through the Allegheny valleys, following the banks of the Susquehanna River, gray clouds appear in the distance. Rounding the next bend, the misty gray streams spiral downward, wetting the surface of I-81. Fortunately, the rain is short-lived, and leaving the slab behind, my daughter, Leah, and I veer off at Exit 211. A vignette of our near future unravels as the almost-perfect blacktop rolls out before us like a scroll. Winding up, over and around the hills, PA 106 deposits us in Carbondale, a coal town on the Lackawanna River. Later, Leah and I enjoy steaks, microbrews, and conversation on the patio of Manhattan Manor. In the background, sixties music plays, quietly competing with the sound of the river beside us.

The next morning, we wheel an hour east toward Milford, the starting point of our tour along Route 6. The overnight rain has left an iridescent sheen on the road that now curves and caresses the mountains along our path. Up and over Moosic Mountain, we soon arrive in Milford, where we pick up the Grand Army of the Republic Highway and head back west on our adventure.

Shortly before passing Lake Wallenpaupack, we round a bend to find a billboard that reads “Guns and Gold – Look Good While You’re Killing S#!+.” Leah and I almost fall off the bike laughing.

At Jermyn, we circumvent Scranton on Route 107, going north around the city on a magnificent stretch of road that takes us through meadows, over hills, and past farms until reconnecting with Route 6 at Factoryville.

Route 11 follows the edge of the mountains into the village of Nicholson, where we come upon the massive Tunkhannock Viaduct. Completed in 1915 by the Delaware, Lackawanna and Western Railroad, this beautiful, arched edifice was the largest concrete bridge in America. All 13 piers rest on bedrock, and one pier’s base rests 42 metres below ground. From the creek bed, the bridge stands 91 metres tall. Even in its present condition, it is an awesome sight. 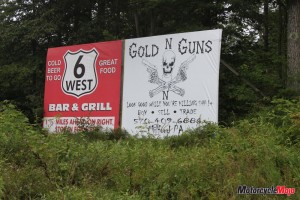 Backtracking to Route 6, we arrive at Twigs, an eclectic bistro in Tunkhannock, just in time for lunch. Later, across the street at the Old Store, I peruse displays of old books and settle on Manhunt, about the pursuit of John Wilkes Booth, who was captured, incidentally, by Canadian Lieutenant Edward Doherty. I am always amazed at how many famous Americans are actually Canadian.

Shortly after lunch we reach Laceyville, and I enter the address for the French Azilum on my GPS. Unbeknownst to us, this action will take us on a never-to-be-forgotten adventure on gravel roads that continue to get narrower as every kilometre passes. I call on all my dirtbiking experience as I manhandle a 900-pound Gold Wing with a passenger and a trailer through the ever-worsening trail. Finally, a fork in the road appears and the road changes to pavement, and a sign tells us the French Azilum is just ahead.

In 1793, French aristocrats loyal to King Louis XVI had a choice – flee or face the guillotine. At a bend in the Susquehanna River, American profiteers set aside 1600 acres, plans were prepared for a town and the invitation went out. Even Marie Antoinette was expected to arrive; however, 1803 brought Napoleon’s amnesty and most of the aristocracy returned home. Today, this site is known as French Azilum, and all that remains of their presence is the remnants of a root cellar.

Back on the road after our little adventure, S.R. 2014 winds us through the countryside to Route 187 at Wysox and then back to Route 6. Long sweeping turns make the fun factor overwhelming as we reel through the valleys and leave the banks of the Susquehanna River behind.

Roads disappear into the mountains on either side, and I wonder where each one goes. If my days here were innumerable, I would explore each one. What tales they could tell of times past, of logging, mining and railroads, and of the Pennsylvania Wilds’ golden years. We roll on, enjoying our magical moments in the Endless Mountains.

Surrounded by low-lying mountains sits the beautiful town of Wellsboro. We park in the driveway at the Packer House Bed and Breakfast, and Nini comes out to greet us. Nini and her best friend Lori, retired flight attendants, can’t wait to tell us all about their town. I soon discover family ties, as Nini’s mother is the owner of the Wellsboro diner, a converted railcar and local favourite stop for a bite to eat.

After a wonderful homemade breakfast, warm hugs, and well wishes, we doddle out of town on Route 660. In a morning melancholy mood, we sadly leave Wellsboro behind to find the warmth of August sunshine upon us as we thread our way between cornfields and green pastures. I am in the zone when suddenly Bambi bolts directly across our path. Hammering the brakes, I can see the fear in those big brown eyes as the deer leaps across the ditch and into the safety of another cornfield. The encounter makes me even more cognizant of the ever-present dangers facing motorcyclists. 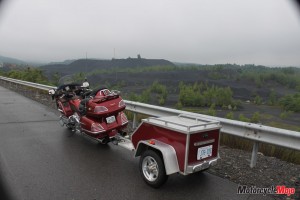 Route 660 ends in Leonard Harrison State Park at the rim of Pine Creek Gorge, affectionately known as Pennsylvania’s Grand Canyon. Three hundred metres below, Pine Creek burbles along for 140 kilometres through this vast wilderness. At its deepest point, Pine Creek lies 440 metres below the rim and is more than a kilometre wide: hardly a creek at all. Our view, extending miles across the Allegheny Plateau, is astounding.

At the Tioga County Visitor Center we take Airport Road over to Route 362. With Pine Creek on our left and tall stands of mature oak on our right, we turn left onto PA Route 6 again. Our route parallels Pine Creek all the way to Galeton.

Once a thriving town that relied heavily on the lumber industry, today Galeton lives in the shadow of its former grandeur. Farther along is the Pennsylvania Lumber Museum, and we stop for an incredible history lesson. Logging was a tough life over a century ago; everything was steam powered, and the equipment on display gives us a window into the hardships of a bygone era.

Heading west again through Coudersport, we thoroughly enjoy the winding turns and the splendid scenery. As we pass through Smethport, the town sign reminds us of Wooly Willie, a toy that allowed you to move hair (metal filings) around on Willy’s face with a magnet. It was designed and made in Smethport and was one of the 40 most popular toys from 1950 to 1980. Greeting us at the Mansion District Inn is Ross Porter, the owner, local historian and mayor of Smethport. During the evening, Ross keeps us captivated with his knowledge of local history, the people who made Smethport a thriving town, and the mansions they built here.

The following morning, Route 6 takes us across the Allegheny River and out of Smethport on our way to Lindholm Road and into Kinzua Bridge State Park. We walk down the slope and onto the Kinzua Bridge, which used to stretch 625 metres across the Kinzua Valley, 92 metres below. Built offsite in 1882, its “Phoenix Columns” were an engineering breakthrough, and when constructed in just 92 days, it was the highest, longest bridge in the world. Once billed as the “Eighth Wonder of the World,” people came from far and wide to see this marvel.

In August 2003, my wife and I first discovered PA Route 6, and at the time I had heard about the Kinzua Bridge. When we rode into the park that August afternoon, I was aghast. Oak and maple trees, over a foot in diameter, were tossed about like toothpicks, and 11 of the bridge’s 20 trestle towers lay in twisted ruins in the valley far below. Tornadoes had converged from three directions one hot muggy July day, and the original anchor bolts that secured the towers to their sandstone piers failed.

Within 30 seconds, nature demonstrated her strength and wrought her destruction. Today, what was once a 625-metre long railroad trestle is a skywalk that ends midway across the valley with a glass floor installed so you can look straight down to Kinzua Creek, 92 metres below. At Route 219, we head north to Bradford. In 1863, land around Bradford sold for six cents an acre, but by 1871 that all changed when oil was discovered; the town boomed, as it was the focus of the “Pennsylvania Oil Rush.” High-quality oil is still pumping out of this valley where the world-famous Kendal racing oils were produced.

Bradford is also the home of the Zippo lighter brand and the Case Knife Museum, where you can take a nostalgic trip back to the 1950s and see TV commercials from that era. After a delightful lunch at John Williams European Pastry Shop, we do a bit of shopping in Bradford’s antique stores, and then we roll out of town heading north to Buffalo, New York, and back to Canada. I can hardly wait to return and explore some of those roads that disappeared into the greenery of the Pennsylvania Wilds. And the best part is that Pennsylvania Route 6 is only three hours from home.