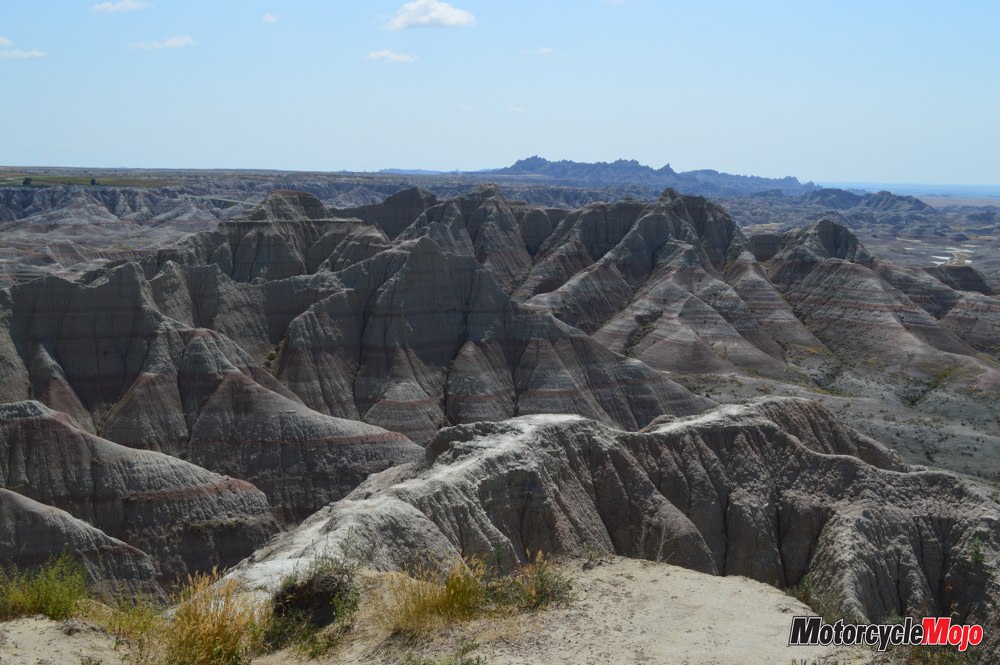 A First-Timer Does Sturgis

Its official name is the Sturgis Motorcycle Rally, and while seventy-three years ago it was introduced as the Black Hills Motor Classic, most riders today know it simply as Sturgis. For fifty-one weeks a year, Sturgis, South Dakota, is a hamlet of about 6500 denizens. For one week in August, the town hosts one of the world’s biggest biker rallies, becoming the epicentre of a party that attracts from 400,000 to 600,000 two-wheeled pilgrims for its annual run. 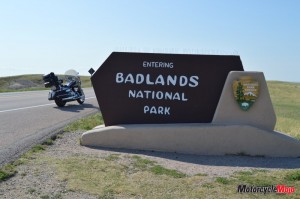 Started in 1938 by the local Jackpine Gypsies Motorcycle Club to sponsor bike races held that first year, Sturgis is a rally like no other. Situated in the Black Hills of South Dakota and surrounded by the Black Hills National Forest, Sturgis offers riders a bevy of tantalizing benefits: hundreds of bike-week events to attend; as many as a thousand vendors to cater to every motorcycle fancy; unrivalled natural scenery for riding; and that greatest of attractions for riders – turns, all kinds of turns, from broad sweepers and esses to mountain-extreme, low-speed corners.

I knew all of this after hearing tales from riding pals and from an abundance of articles, websites and videos featuring the famous event. But seeing as there is no substitute for first-hand experience, I decided to make the run to Sturgis from Toronto in 2013 with my riding pal John “Evil” Hughes – it’s his sixth time, and first for me. We set our ride calendar to depart Toronto in time for an early arrival in the Hills, and made plans to take in as much of the riding and event partying as can be achieved in a week.

Even on 113 cubic-inch beasts like the Yamaha Roadliners that both Evil and I happen to own, the ride to Sturgis is like a blind date with an unpleasant companion: it seems longer than it really is and feels like it will never end until, blessedly, it does. The scenery from Toronto to eastern South Dakota is spectacularly dull, memorable only in its nothingness. Unless you have a personal affection for cornfields, the kilometres drone on like your high school history teacher on a sunny Friday afternoon in June.

Finally, after two and a half days of pointing west, now on the edge of a marvellous landscape, we began the notable part of our ride by taking the long way around through Badlands National Park, a 244,000-acre protected area which accommodates vehicular traffic around a 35-kilometre circuit. The ride features a panorama of spires and canyons that form an environment visibly devoid of fauna, and the adjacent prairie-grass sections host abundant wildlife, including numerous charming prairie dogs. This is a whole new kind of nothingness – simply spectacular.

We arrived in Sturgis soon after taking in the park’s rugged, piercing beauty, and enjoyed a cold pint at the famous Main Street saloon, One-Eyed Jack’s. It was six days from the official August 5 opening of Sturgis Bike Week, and already Sturgis’ streets were filling with bikes and trikes, most of them Harleys, and none with stock exhausts. Many riders arrive before the start of the rally to take advantage of the lower hotel rates, more readily available campsites and less encumbered traffic along the sensational routes that make the trek here so worthwhile. 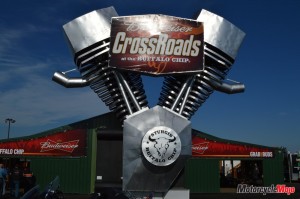 Bike traffic became immense over the next few days; the hotels and campgrounds within a fifty-kilometre radius and beyond were already witnessing the swell of two-wheeled tourists, and the highways were becoming more packed with RVs of every description, many of them 40-plus footers with every amenity known to humankind. Closed and open trailers abound, some with three or four bikes aboard.
One of the main attractions is the scope and status of entertainers playing in the Black Hills, which during the rally rivals what you might find in any of the entertainment capitals of North America. Who’s in town? Just Kid Rock, ZZ Top, Travis Tritt, Lynyrd Skynyrd, Toby Keith and the Doobie Brothers, to name but a few. Tickets at the Buffalo Chip campground were reasonably priced at $72 a head for mainline acts that also feature less famous opening acts in a six-hour marathon of music and partying.

There is, of course, no shortage of characters in Sturgis, not all of them human. While taking in the sights and sounds at the Full Throttle Saloon, we had the opportunity to meet “Little Girl,” an adorable Chihuahua who “just loves to dress up in biker gear” according to her mom. She told me that in return for the photo I scooped, I had to like her Facebook page. And I would have done just that, but searching for “little girl” on the Internet proved a dispiriting exercise.

Our first full riding day in the Black Hills was extraordinary; we went in search of dead presidents and riding nirvana. Joined by our friend Bob “Murph” Murphy, who rode down from Vancouver, we headed for Mount Rushmore, the most famous attraction in the region, and for the Needles Highway, another notable riding destination. Rain began just as we were getting underway, and as the lure of the roadways to motorcyclists are the steep, sharp turns, hairpins and tunnels, negotiating the route on wet roads was not an inviting prospect. Alas, while the rain soon abated and remained at bay, its first cousin, fog, made a surprise appearance. When we arrived at Mount Rushmore, not even the base of the gargantuan sculpture could be seen. Evil took us to a different vantage point a few kilometres away, where only George Washington’s stony face could be seen clearly. “Mount Rushless,” we called it, a deal at 75% off. Only on a return visit could the iconic sculpture be clearly seen, photographed and appreciated. 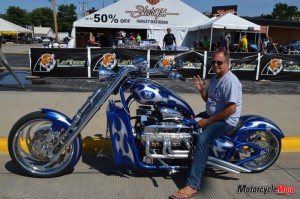 The “needles” on the Needles Highway are spired granite rock formations that line the route. The sharpest of its corners are marked with speed warning signs, and a useful maxim in the Hills is that the lower the speed recommendation, the more accurate it is likely to be; a skilled rider can safely negotiate a 30 mph corner at 40, but a 15 mph sign is not to be taken lightly. A few miles into this terrain, we saw a road sign alerting us to the next corner: 5 mph! Riding in these extreme conditions requires near-surgical precision, especially considering that you are riding in mountains, often with no guardrails, and the opposing traffic is mostly tourists unfamiliar with the terrain and gawking at the sensational, but distracting scenery. These turns call for first-gear entry, keeping the revs up, being wary of other motorists encroaching on your lane, not being afraid to scrape the floorboards to keep your line through the corner, and accelerating neatly out of the apex to keep the bike from flopping. Not for the faint of heart or for new riders, but beautiful and exhilarating.

I remembered the advice a fellow rider returning from Sturgis had given me. “If the sign says fifteen miles per hour, don’t do sixteen.” And I now understood why we rode through 2500 km of cornfields to do this. Even through my helmet I could hear Murph yelling, “Yahoo!”

Some of the tunnels that can be found throughout the region are so low and narrow that commercial trucks and other large vehicles are prohibited from entering the highway. Nearing the end of the Needles Highway, we joined a cadre of vehicles to take pictures of the last tunnel, a remarkably narrow passage carved by both man and nature through the enormous rock needles.

Following a spirited run through Spearfish Canyon, and later through Custer State Park along the Wildlife Loop Trail, where the deer and the buffalo roam, we headed off for another of the Black Hills’ famous trails, Iron Mountain Road. This 27-kilometre run features hairpins, sweepers and tunnels like Needles, with the added attraction of “pigtail bridges” – 360-degree turns that wind completely over themselves. Fantastic riding! The next day we visited Deadwood, a town of not much more than a thousand souls nestled a mere hop from Sturgis. Its most famous resident was James Butler Hickok, better known as Wild Bill. We witnessed it crawling with motorcycles, as it’s a tourist town with a colourful past, an attractive facade of old-west buildings, excellent bars and restaurants, live music, and for those so inclined, a lot of casinos. Back in Sturgis, vendors, who erected or parked everything from stalls and booths to massive tents and trailers to promote their wares, had now confiscated both sides of the two main thoroughfares, Lazelle and Main Streets. Every imaginable kind of motorcycle machine, part, service, accessory, adornment and concept was available.

If it’s not available in Sturgis during bike week, either you don’t need it or it just can’t be had. Among our favourite natural sites was the Crazy Horse Memorial Monument, behind which is an awesome tale of the persistence, dedication and talent of one man who worked to carve a likeness of Lakota warrior Crazy Horse out of Thunderhead Mountain, on private and sacred native lands. The sculptor’s wife and ten children have assumed responsibility for the work since his passing thirty years ago. The trip is well worth taking, and the documentary film shown at the adjacent Native Education Centre is compelling. Blasting began in 1948; when completed, decades from now, the monument will be 27 metres high. The four busts of Mount Rushmore are, comparatively, “only” 18 metres in height. Later that evening, we rode out to the Full Throttle Saloon. Riding into the grounds was a spectacle in itself, as we navigated for a parking spot among the 12,000 or more motorcycles on the property. We did some “dirtbiking” through the back forty and finally made our way to the main stage, where Bret Michaels was blasting some serious rock.

The logistics must be staggering, yet despite the enormous crowd, you could buy a drink without ever lining up. And not many resorts can boast a burnout pit inside the bar. Full Throttle Saloon is not exaggerating its claim of being the “world’s largest biker bar.” It might well be simply the world’s largest bar. One of the rides we were sure to take in was the Devil’s Tower in neighbouring Wyoming, about a two-hour run from Rapid City. This unique, 200-million-year-old rock formation, standing more than 365 metres high, was declared America’s first national monument. The landscape along the way to Devil’s Tower is pure pastoral beauty, with rolling hills and ranches with names redolent of the old-movie era, like the Circle J and the Triple M. In nearby Hulett, Wyoming (pop. 383), restaurants and bars along the main drag feature live music both indoors and out.

When we arrived, Cool Willie and the Frigidairs were playing a mixture of vintage rock and R&B on the outdoor stage at the rear of the Ponderosa Café, blazing guitar riffs delighting the assembled. Our last day in the Black Hills, we said goodbye to the enjoyable noise and madness of Sturgis’ Lazelle and Main Streets, and made a final pit stop in the small town of Piedmont to check out a bar that could be used for a motorcycle commercial. A friendly waitress brought the best burger I have had in years. The next morning, when I set the GPS for “Go Home,” the log says 2486 km to go. We arrive home a mere two days later, accumulating just under 1250 km a day. Having travelled nearly 5000 km to ride a little over 1500 km in the Black Hills, I purchased a vest patch that says, “I Rode Mine – Sturgis ’13,” a small compensation for the four-and-a-half-day ride that took us there and back, and a badge of pride and honour. Was it worth it? Sturgis is the only place in the world where you can experience this quality of riding, the vast list of events and the massive entertainment venues on such an unbelievable scale. And in addition to the patch, I got my first tattoo to remember it by. I’ll be back.