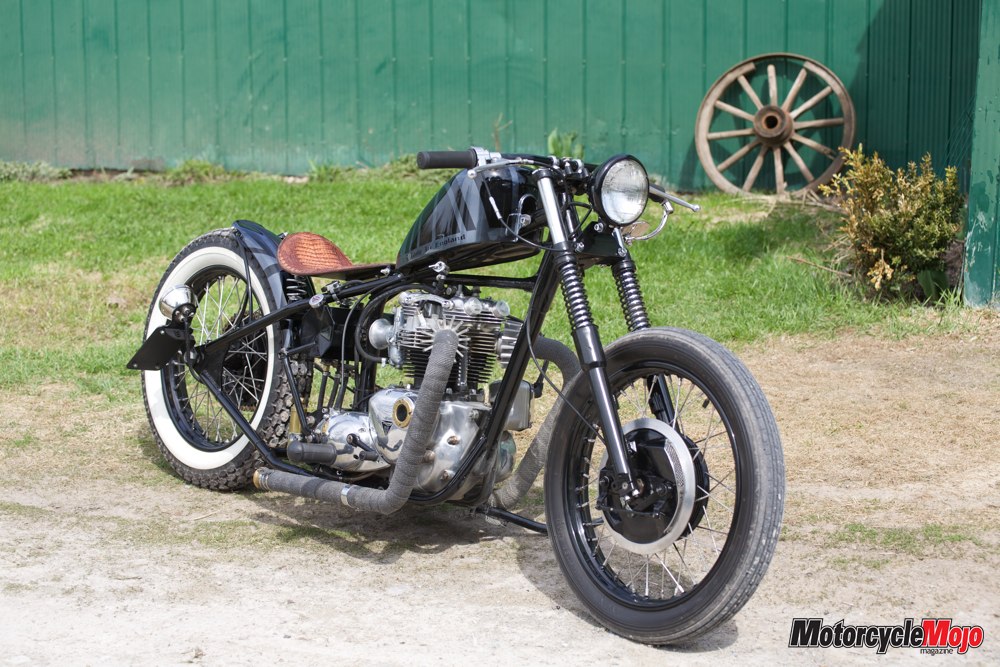 “I’m just some donkey who lives in the middle of nowhere. If I can do it, anyone can.” Damned if those aren’t words to live by. Chris Kelly has a way with words – and with old Triumphs, now that he’s had a bit of practice. So why did a man so full of wisdom select this storied British marque for his first foray into custom bike builds? Chris told us he was inspired by a picture of a really cool old Triumph bobber pinned up on the wall in his buddy’s shop. Then one day, while searching online, he stumbled across a bike that reminded him of it. If he had only known then what he knows now. 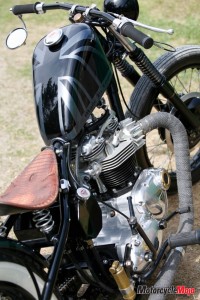 Chris set out on a four-hour drive, mid-week, to check out a 1970 650 cc Bonneville with a hard tail that belonged to an elderly, widowed lady who was asking way too much. Sure it might have been worth half of what Chris paid, but for those of us who’ve been in that situation, there’s something that happens when you put your hands on an old girl that needs some work (I mean the bike). The bond between man and machine had taken hold, and the forlorn Triumph had found a new home.

The guy selling the bike on behalf of the woman had started it up to show that it ran, which was a good thing, because Chris had never started a British bike before. This was only the first of many lessons along the way.

Priority one was a paint job. A previous owner had almost inconceivably adorned it with a German military livery . . . What!?! I’m pretty sure Churchill would have swallowed his cigar. Chris confesses to whispering words of comfort to the bike, reassuring her that he would restore her heritage. True to his word, the paint done by Jabber Studios pays homage to the Empire with a Union Jack discreetly displayed on the tank.

The next step was to recondition the frame with new welds and powdercoating courtesy of Kreater Custom Motorcycles. Once reassembled, it became obvious that the patina on the rest of the bike didn’t complement the now pristine paint and powdercoating. Everything would have to come apart, including the engine.

Disassembling an engine was not something Chris had experience with, but that didn’t stand in his way. Fortune would smile on this pair in the form of a chance encounter with a YouTube channel that contained videos detailing how to rebuild vintage Triumph engines. With a new resource at hand, the motor came apart and went back together . And apart and back together. During the process, Chris discovered a certain amount of interchangeability between Triumph models, which allowed him to swap several key parts from other bikes he had acquired. What you see in these photos is a combination of two motors, resulting in a single-carb 650 cc twin that looks like it just came off the assembly line. Job well done, man. 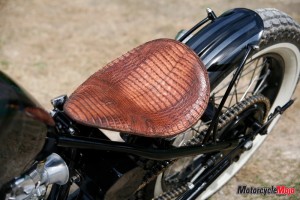 Dual exhausts are wrapped and slung low under the pegs, and probably do a good job of keeping your feet warm on cold days. Their brass tips match perfectly with other small touches found on the bike.

The interface between rider and bike involves only the essentials: a set of grips and two levers, the shifter and rear brake pedal – which are reversed, as per the norm on old English mounts – and a custom-made, alligator-clad seat on dual springs. Continuing the classic homage, two other exposed springs suspend this bike, and they reside on the front fork legs. The original rims have been powdercoated black, and a custom spoke kit was installed, affording the old hoops a new lease on life.

Chris has built a couple more of these Triumphs, and says there are plans for others in the future. He’s a very talented and humble man, and gives more credit to friends and resources than to himself. “If I can do it, anyone can,” he repeated several times during the photo shoot. Starting out, Chris didn’t know anything about old Triumphs or complete engine rebuilds. What he knows now is that he’s still learning – and he has no plans to stop.
“Success consists of going from failure to failure without loss of enthusiasm.” – Winston Churchill
Thanks to Chris and Shannon for photo location.