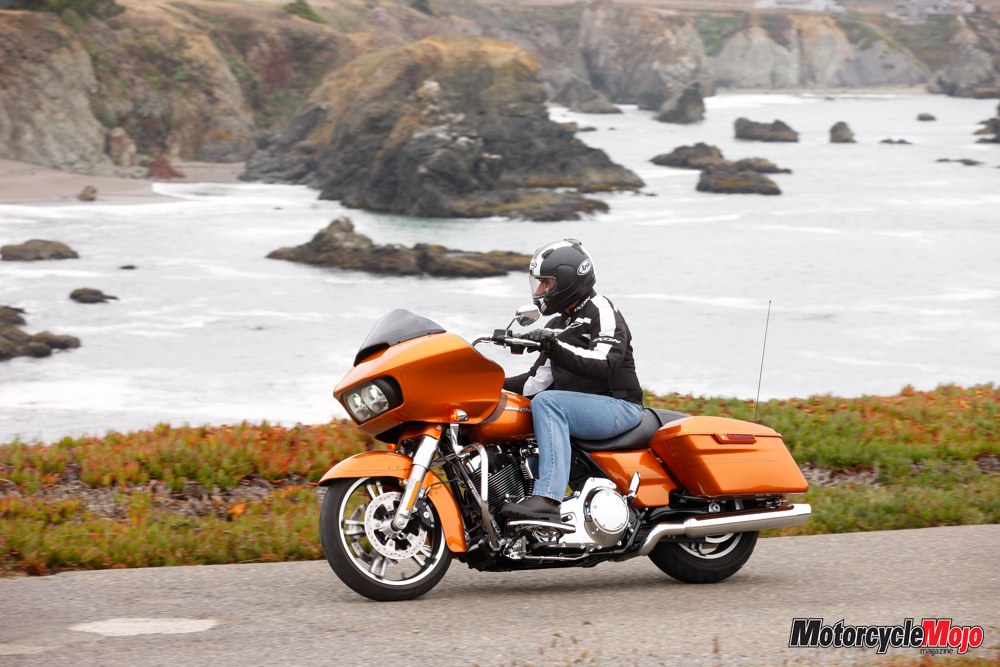 With almost a cult following, the Road Glide was sorely missed in 2014. But fear not, it has returned — better than ever

Media outlets were quick to report last year that the popular Harley-Davidson Road Glide had been discontinued, gone forever to the land of the Softail Springer, the XR1200 and, well, any Buell. In their defence, however, the Road Glide was absent from Harley’s line-up this year, and those who reported that it had been unceremoniously terminated had no way of knowing that Harley was actually preparing an all-new Road Glide, reworked from the ground up as part of Project Rushmore. The reason it wasn’t introduced with the other Project Rushmore touring bikes, as a 2014 model, is simply because it wasn’t ready. And it would have been detrimental to sales if the pre-Rushmore version were being sold at the same time as the other, improved Rushmore bikes.

Producing a new Road Glide wasn’t just a matter of bolting a new windshield to its fairing; the entire frame-mounted windbreaker has been redesigned and repositioned. It also uses new Dual Daymaker Reflector LED headlights. Stats say these are 45% brighter on high beams, with more spread to illuminate the ditches. But the changes go beyond the fairing. We got a chance to ride the 2015 Road Glide at Harley’s new bike launch, held in the beautiful wine country surrounding Sonoma, California. 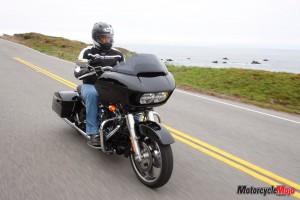 Although its silhouette is familiar, the Road Glide is a completely new bike. Customer feedback revealed that helmet buffeting was excessive on the previous model, so the fairing has been streamlined and brought 5.5 cm closer to the rider to improve airflow, and three vents have been added, contributing to a 40-percent reduction in buffeting, according to Harley.

Inside the fairing, Harley has added its latest Boom Box 4.3 infotainment system, introduced with last year’s wave of Rushmore bikes. There’s also a Boom Box 6.5 infotainment system with a 6.5-inch touchscreen and navigation system, which comes standard in the Road Glide Special. Gauges have been redesigned for better legibility, and new hand controls are more ergonomic. There are two storage compartments within the fairing, one of which contains a USB cable and padding to store and connect your media device. Curiously, the compartment doors don’t stay open, but this may have been done intentionally to deter use while riding.

Moving rearward, there are new hard saddlebags that feature one-hand operation. Just flick the inboard-mounted lever and lift the cover open. They’re the easiest-opening saddlebags I’ve ever seen on a bike.

Throw a leg over the new Road Glide, and you discover an entirely different, more accommodating riding position. The handlebar has been moved rearward a significant 14 cm, placing the grips at a comfortable reach. At six feet tall, I can plant both feet squarely on the ground with a slight bend at the knees, but it might be a slight stretch for shorter riders (Harley also introduced a pair of 2015 Ultra Low models for riders with a short inseam – see sidebar). 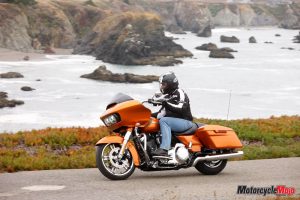 Other improvements include a beefier front end that uses 49 mm forks clamped in sturdier triple-clamps. The front wheel has also grown to 19 inches in diameter, which not only improves handling and stability, but also looks great.

My chosen ride for the day was the Road Glide Special, which aside from the aforementioned premium sound system, also includes a security system, a knob preload adjuster on the rear suspension (air adjustable on the standard model), linked brakes with standard ABS, and different paint schemes and trim, all for $2,800 more than the standard model’s $25,579. (There is also a CVO Road Glide for 2015 that uses the Twin-Cooled engine first introduced in the 2014 Ultra Limited.)

Our ride began as we headed northeast out of Sonoma toward Highway 128, which then turned northwest toward the Pacific. Around town, the Road Glide was relatively manageable (well, it does weigh 385 kg wet), with lighter steering effort than you’d expect on such a big bike. Its high-output Twin-Cam 103 engine has diesel-like torque at low speeds, which hustles the Road Glide effortlessly in lower gears.

The open road is where the Road Glide really shines, and its newfound stability really gives it a solid, planted feel. Steering is direct, and the bike doesn’t waver from its line through sweepers. The fairing does add some weight up high, and it feels more top heavy than the Ultra Classic, but this is mostly noticeable when transitioning through a series of bends. There’s ample cornering clearance, even at a spirited, touring-bike pace, and the Road Glide handles respectably considering its adult dimensions.

Before taking off on the test loop, I connected my iPhone so I could listen to some tunes on the road. Navigating the sound system’s menus is relatively easy, and it can be done either through the touchscreen, which is a bit of a stretch to reach despite the closer positioning of the fairing, or via the handlebar buttons. I resorted to the latter more often than not. One thing I found a bit annoying was that when switching to another menu from the GPS map display, I couldn’t just hit the back button to return to the map, I had to reselect it through the menu. The system also switched displays on its own occasionally, from the media display to the menu screen for instance, and on occasion, the music coming from my iPhone cut momentarily, something my device has never done when connected to other sound systems. 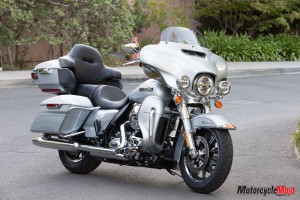 In any case, I ultimately found the sound system distracting as I tried to decide between the Red Hot Chilli Peppers and Jane’s Addiction, so I shut it off and turned my attention to what you’re supposed to do on a motorcycle: ride. The sound system does have its merits, though, and listening to road music did make a short stint on the interstate even shorter.

The navigation system works fine and was easy to program, but it doesn’t feature pop-up directions when approaching a waypoint or a turn-off to grab your attention, relying solely on auditory cues (yes, I know real riders use maps, but it did get me back to the hotel after I lost my riding group.)

After lunch at the Tides Wharf restaurant just off the Pacific Coast Highway in Bodega Bay, where Alfred Hitchcock filmed the movie The Birds, we headed inland again toward our hotel in Sonoma. The roads were sinuous, undulating and refreshingly free of traffic. The Road Glide was in its element here, gliding (no pun intended) over the pavement in luxury. Buffeting has indeed been reduced, and although it’s still present, it is now at a negligible level, especially when the trio of fairing vents are open.

Suspension compliance is firm but not harsh, and it is partially responsible for the Road Glide’s planted, stable ride. To make adjustments to the Special’s rear suspension, you must remove the left saddlebag to access the preload knob, a minor inconvenience, more so if the bag is loaded.

The seat is firm and provided all-day comfort, but one area of discomfort was revealed when the ambient temperature hit 86 degrees Fahrenheit and I hit traffic in Sonoma. Heat coming off the engine began to toast my inner legs, though once on the move, the absence of fairing lowers cooled me off quickly enough.
Some riders might have lamented the apparent demise of the Road Glide, a bike that traces its roots to the Shovelhead-powered FLT introduced in 1980. Fortunately, it has returned after its recent, brief intermission, and for fans of the venerable touring bike, it seems like it was worth the wait.

Harley reworked almost its entire touring bike line-up late last year, as part of Project Rushmore. Several changes were made to the bikes, including a new, more powerful air-cooled Twin Cam 103 engine, a Twin-Cooled High Output Twin Cam 103 engine with liquid-cooled heads, revised aerodynamics, redesigned handlebar switches, new headlights (twin halogens or an LED, depending on the model), a hydraulic clutch, and linked ABS. Two more Electra Glide models have been added to the Project Rushmore roster for 2015, the Ultra Classic Low and Ultra Limited Low. As the name suggests, these are lowered versions of the existing bikes.

Harley claims that 20 percent of its current customers measure less than five-foot-seven inches tall, and many of them would like to own a proper touring Harley but find its standard seat height, controls and side stand just a bit out of reach. The new Lows are designed to cater to riders measuring from five-foot five inches tall.

Harley engineers didn’t just bolt on a pair of shorter shocks to an existing Ultra; they made many more changes to accommodate those of a shorter inseam and reach. Among them are a lowered suspension (25 mm front and rear), a lowered and narrowed seat, a narrowed primary housing to facilitate the reach to the ground, a handlebar that has been pulled back 50 mm, smaller-diameter handgrips to ease the reach to the levers, and an extended side-stand tab for easier access. Even the passenger footboard mounts have been modified to make it easier to push the bike.

From the rider’s seat, you can instantly feel the more upright riding position because of the reduced reach, and for a six-footer like me, the reach to the ground is cruiser-like low (seat height is 685 mm).

Once riding, you can barely tell the difference between the Low and a regular Ultra. The suspension is firmer due to the reduced travel, but it’s not harsh. Cornering is, understandably, reduced, but there’s enough of it that you can maintain a comfortable touring pace on winding roads with minimal floorboard scraping (one visual cue that gives the Low away are feelers added to the footboards).

Altogether, it’s a comprehensive list of changes, and perhaps more importantly, they are almost invisible. Unfortunately, the Ultra Classic Low ($29,839) and the Ultra Limited Low ($32,999) come in at a premium cost of $1,400 and $1,100, respectively, over their regular counterparts.