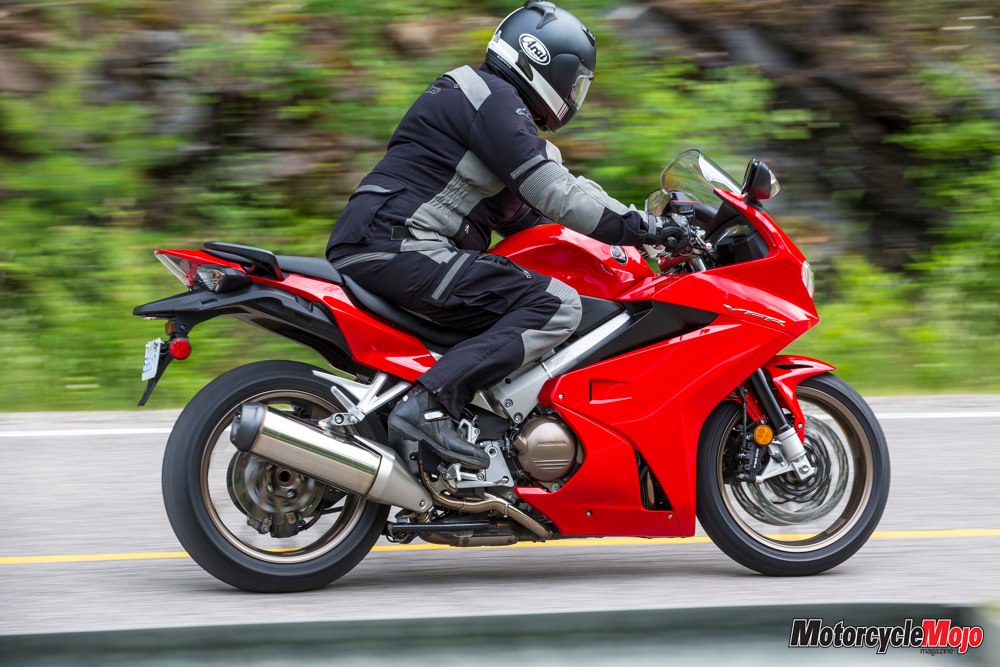 The VFR800F rejoins Honda’s line-up after a four-year absence, with more amenities and a lower price than its predecessor

Historically, there are a few Honda models that define the brand. They are the bikes countless riders consider significant. Maybe they turned their first wheels on a Mini Trail; perhaps they rode their first cross-country trip on a CB750; maybe they met that “nicest person” they went on to marry, on a 305 Dream.

The VFR800 is another brand-identifying motorcycle for Honda. It traces its roots to the VF750F Interceptor of 1983. Honda was the first with the V-four in 1982 with the VF750S Sabre, and then in the ’83 Interceptor. The same year, Yamaha introduced their V-four in the Venture touring bike, then two years later in the V-Max (a bike that has become significant for that company, too). 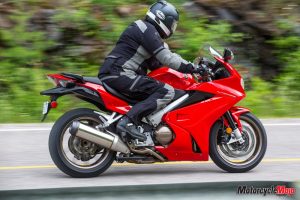 The V-four-powered sportbike went through several updates over the years and enjoyed an almost unbroken streak in Canada, until it was replaced in 2010 by the larger and quite different VFR1200F. The bike continued to sell in Europe, but many Canadian riders were sad to see the smaller VFR go, as it had earned a reputation as a great all-round sport-tourer. The VFR800 returned to Honda’s line-up this year, and we spent some time on the machine in Ontario’s picturesque Renfrew County.

Although it wears new skin, the VFR’s silhouette is easily recognizable. Sharp angles have been smoothed, and it now wears a new face, and perhaps more significantly –more aesthetic and practical – a single muffler now resides low on the right side, replacing the twin, high-mounted canisters of the previous generation.

The changes go more than skin deep, but not too deep, as the 2014 VFR remains mostly unchanged from the previous generation. It uses the same aluminum frame with the same steering geometry, but an aluminum rear subframe replaces the former steel item. The new exhaust and subframe contribute to a 6.9 kg reduction in weight, much of it taken from up high. In total, the new machine is down 10 kg from its predecessor. The radiators have been moved from the side to the front to improve engine cooling, and by moving them forward, the machine has been narrowed by 40 mm, making it feel more compact.

Returning is the 782 cc, liquid-cooled V-four, which still uses VTEC valve actuation. The previous-generation VFR had aggressive VTEC tuning, which resulted in an abrupt power boost, almost turbo-like, when the tach needle swept past the 7000 rpm mark and the engine engaged all four valves per cylinder. You either loved or hated this surge in power. I wasn’t a fan, and neither were many VFR owners, it seems, because the VTEC transition has been smoothed and it is now almost imperceptible. The spread of power is broad and flat, especially in the low to mid- range rpm, with torque peaking at 55 ft-lb at 8500 rpm.

The smooth engine has a unique V-four drone and will hum along comfortably all day below 6000 rpm. Spin the engine up towards the 11,750 rpm redline and it rewards with instantaneous forward thrust, as that drone turns into a growl, partially due to the VTEC’s actuation of all four valves above 6500 rpm.

The riding position is very familiar, leaning more toward the sporty side than the touring side. The foot pegs are higher than I’d like them, even with the two-position adjustable seat set at its higher position (789 or 809 mm). There’s a modest lean forward to the handlebars, though this can be adjusted with an accessory handlebar riser kit available though Honda. The standard riding position is conducive to a quick pace on winding roads, though, and the fairing does a good job of diverting the windblast from your chest and torso, while the air flowing over your helmet is smooth and free of buffeting.

At speed, the bike feels like it’s on rails, exhibiting a level of straight-line stability you won’t find on a full-blown supersport. This stability inspires confidence and continues on through high-speed sweepers. The trade-off for this unwavering steadiness is that the VFR isn’t supersport nimble, and requires more effort to flick through tight turning transitions.

Suspension action is firm yet comfortably compliant, and the 43 mm fork tubes feature a conventional female slider with unique lower mounts, onto which are bolted radial calipers. From a distance, it’s easy to mistake it for an inverted fork.

Suspension at both ends is adjustable for rebound damping and preload, the latter via a remote knob on the shock.

Good news for VFR aficionados is that the price is $14,499, which, incidentally, is $200 less than it was in 2009. That includes linked ABS, traction control, five-level heated grips, LED headlights, self-cancelling turn signals that use wheel speed – not distance – to cancel, and built-in saddlebag mounts (colour-matched hard saddlebags will set you back $1,350).

Although the changes aren’t revolutionary, many riders will be glad to see the return of the venerable VFR800, and with its reasonable price and multitude of added features and improvement, it will likely win over many new fans.”