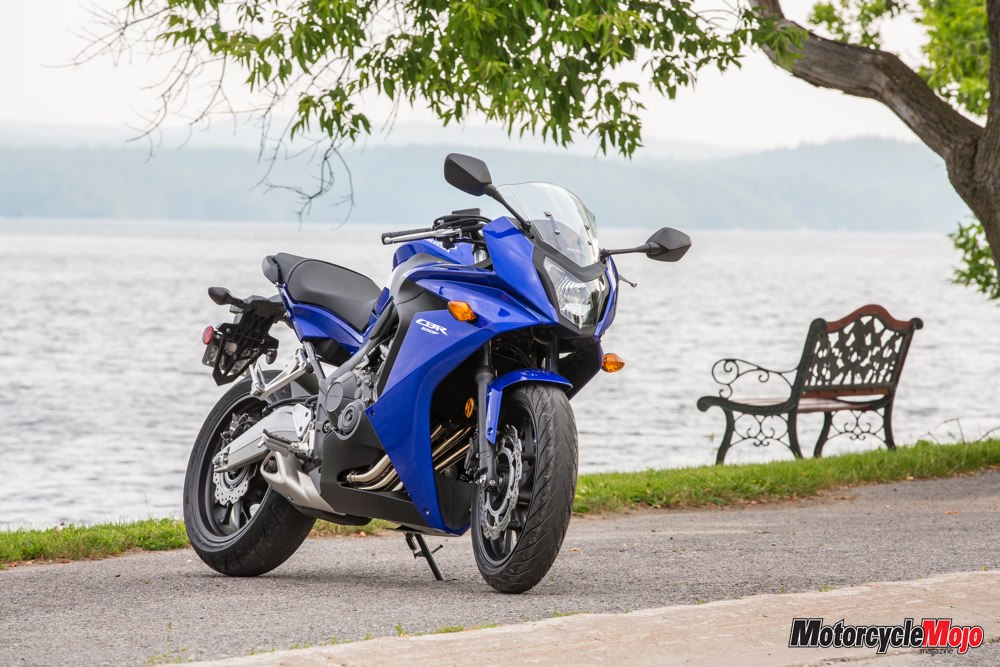 There’s been a sharp decline in sales of middleweight supersport bikes over the last few years, kicked off by the economic crash of 2008, then continuing to drop as insurance rates skyrocketed. This is the main reason that BMW, a company currently enjoying success with its open-class S1000RR supersport machine, put plans to introduce a 600 cc variant on the backburner a few years ago. (Bet you didn’t know that, but it was confirmed by former BMW Motorrad chief Hendrik von Kuenheim.) However, economics aside, riders are also maturing and are looking for a more versatile and street-friendly middleweight sport bike, which is something that’s been absent from Honda’s line-up of late.

This wasn’t always the case. Honda’s last sporty middleweight all-rounder was the CBR600F4i, which was initially introduced in 2001, though it was the successor to a series of street-friendly CBR models dating back to the CBR600 Hurricane of 1987. It was in 2003 that Honda put a sharper focus on the racetrack and replaced the F4i with the CBR600RR. It wasn’t over for the f4i, however, as it was offered in parallel to the RR in other markets. For a single year in 2006, it made a Canadian comeback and was offered alongside the CBR600RR as a more street-oriented sport bike option.

A Bike for Real-World Riding

Honda has finally brought back a middleweight sport bike that turns down the sharp-edged racing focus a few notches, and offers riders a more useable middleweight sportbike package. It’s the 2014 CBR650F, and it slots in nicely between the beginner-friendly CBR500R and the track-ready CBR600RR. We sampled it during a press intro held in Ontario’s Renfrew County, where we headquartered at the Calabogie Peaks Resort, which is surrounded by hills, lakes and winding roads – the ideal sport bike setting.

The CBR650F is not based on an existing platform and is an entirely new machine. It’s also not a showcase of radical new technology. Rather, it’s a simpler design that uses a steel frame to cut costs (as opposed to the RR’s aluminum frame), and has modest engine and suspension specs. There’s no slipper clutch or quick shifter, nor any other track-day features. 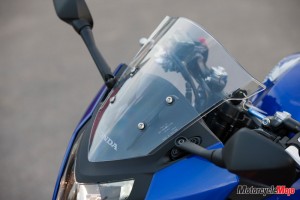 A full fairing and bodywork give the CBR650F a very sporty appearance, and from the side it bears a family resemblance to its two smaller siblings, the CBR300R and CBR500R. It has a unique nose, however, using a single headlight that’s very close in design to the headlight on the CB500X. The exhaust header has a distinctive bend reminiscent of the CB400 Four of the mid-1970s, and there’s a single muffler mounted beneath the bike. Overall, the styling comes together and it looks sportier than its spec sheet suggests.

The riding position is relaxed, with a slight forward lean to the raised clip-on handlebars, which are mounted somewhere between a supersport and a naked bike in height. There’s ample legroom (there’s actually more legroom on the CBR650F than on the new VFR800F), and the seat, although firm, is flat and relatively comfy.

Minimal info is available in the LCD instrument panel, which has two screens. On the left display are the digital tachometer and speedometer; on the right are the odometer, twin trip meters, clock, warning lights and fuel gauge.

It Starts With a Blank Canvas 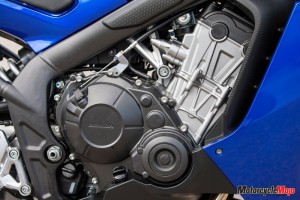 Its 649 cc liquid-cooled inline four is not a revised version of the F4i mill, nor is it a detuned version of the CBR600RR engine, which is what powered the CBF600 in 2010. It’s an all-new design, with new crankcases, cylinder and head. The cylinder bank is canted forward at 30 degrees for a lower centre of gravity, and stacked transmission shafts shorten the crankcase front to rear. Although the engine has the same 67 mm bore as the F4i and the current CBR600RR, it has a longer 46 mm stroke (up from 42.5 mm), and is tuned with an emphasis on low- to midrange torque, so it’s not a high-revving screamer. Claimed peak torque is 46.5 ft-lb at 8000 rpm. Honda Canada doesn’t publish horsepower figures, but European specs put the CBR650F at 85 hp, up from the 77 hp of the CBF600. The fuel injection system uses a mechanical linkage and cables, so there are no selectable ride modes, traction control or any other such electronic rider-assist features. Despite the bike’s ” full fairing, the oil filter is accessible without having to remove any body panels, which is good news if you do your own maintenance. There’s no Canadian fuel consumption numbers available yet, but the European model claims
4.75 L/100 km, which means you could theoretically travel about 360 km on its 17.3-litre fuel tank.
A steel frame uses elliptical-tube spars, and the die-cast aluminum swingarm is banana-shaped on the right side to clear the muffler. The conventional 41 mm fork is non-adjustable, while a single, preload-adjustable shock is mounted to the swingarm without linkages—again, nothing groundbreaking here, but known, reliable technology. Chassis geometry is sporty, and claimed wet weight is just 212 kg, which is the same as the Yamaha FZ6R, a kilogram heavier than the Kawasaki Ninja 650R, but 33 kilos lighter than the rather portly Suzuki GSX650F. Its wheels are 17-inchers, and tire sizes are supersport-spec 120/70-17 in the front and 180/55-17 out back.
Until recently, Honda swore by linked brakes, but in a trend we’ve seen of late on other new Honda models, the brakes on the CBR650F are not linked, using instead a more conventional separate braking system. When asked why the company has done an about-face, the folks at Honda didn’t have a definitive answer, suggesting that cost or customer feedback may have been contributing factors. There are twin 320 mm discs and two-piston calipers up front and a 240 mm disc with a single-piston caliper in the rear; ABS is standard.

Fire up the 650F and you won’t find that much remarkable about its engine, but this is not a bad thing; it sounds nice and feels nice, and it’s mostly smooth. The engine spins at a vibration-free 5000 rpm at 110 km/h, though some buzzing begins making its way into the seat and handlebars at about 7000 rpm, or at about 140 km/h. Clutch effort is light, but the lever is quite far from the handlebar – not a problem for my extra-large hands, but some riders might find the reach a bit of a stretch, and unlike the brake lever, which is adjustable in six positions, the clutch lever is not adjustable. Mirrors offer a decent rear view, which is only partially obscured by your arms.

Although not disappointing, I was expecting the engine to feel more muscular at lower revs, especially considering its longer stroke compared with the CBR600RR. Torque-wise, the CBR650F is not as strong as the Ninja 650R at lower revs, but the CBR has longer legs and revs higher. It does feel more powerful off the bottom than the Yamaha FZ6R, and although I can’t make a direct comparison to the Suzuki GSX650F because it’s been too long since I’ve ridden one, I recall it was quite torquey off the bottom, maybe more so than the Honda. Power delivery is relatively linear for an inline four, and it pulls hard enough in top gear that a leisurely pass is possible without downshifting. If you want to get past slower traffic in a hurry, the CBR will do so effectively after you drop two gears and let the engine spin.

Steering is neutral, but on the slow side for a middleweight sport bike; it’s not supersport-nimble, but it is very stable. It’s easy to tighten up your line in a decreasing-radius turn, and the 650F even responds well to trail braking, without exhibiting a tendency to stand up. The suspension, which isn’t adjustable for damping, is well sorted and is a fine compromise for most street riding, even at a spirited pace. Since this isn’t a bike I’d consider using for serious lapping sessions during a track day, I didn’t miss the lack of adjustability on the street.

During the return trip to Calabogie Peaks Resort, we unintentionally turned onto some dirt roads, which actually demonstrated the versatility of the CBR650F’s chassis and suspension. We rode only about 15 km on gravel, but it revealed more about how competent the chassis is than the rest of the day spent on pavement. On the gravel roads, we actually picked up the pace we’d been keeping on the pavement, and the CBR just railed along, steering effortlessly on the gas with a surprising amount of grip coming from the Dunlop D222s. Even the ABS proved effective and not too intrusive, especially in the rear, which also helped with cornering.

The CBR650F is a middleweight sport bike aimed at both newer and seasoned street riders on a modest budget. If your priority is lapping a racetrack, a Honda sales rep will gladly point you toward the CBR600RR. The CBR650F is non-intimidating and easy to ride, yet powerful enough that more experienced riders can consider it as a serious option if they find a true middleweight supersport is too focused and compromising. It does everything well (including flat-tracking on gravel fire roads), and with a few aftermarket accessories like a taller screen, heated grips and saddlebags, it will make a great lightweight sport-tourer.

The CBR650F is a sensible offering that has finally been added to Honda’s line-up, and that certainly merits a good look if you’re pondering a middleweight all-rounder with a sporty penchant.”