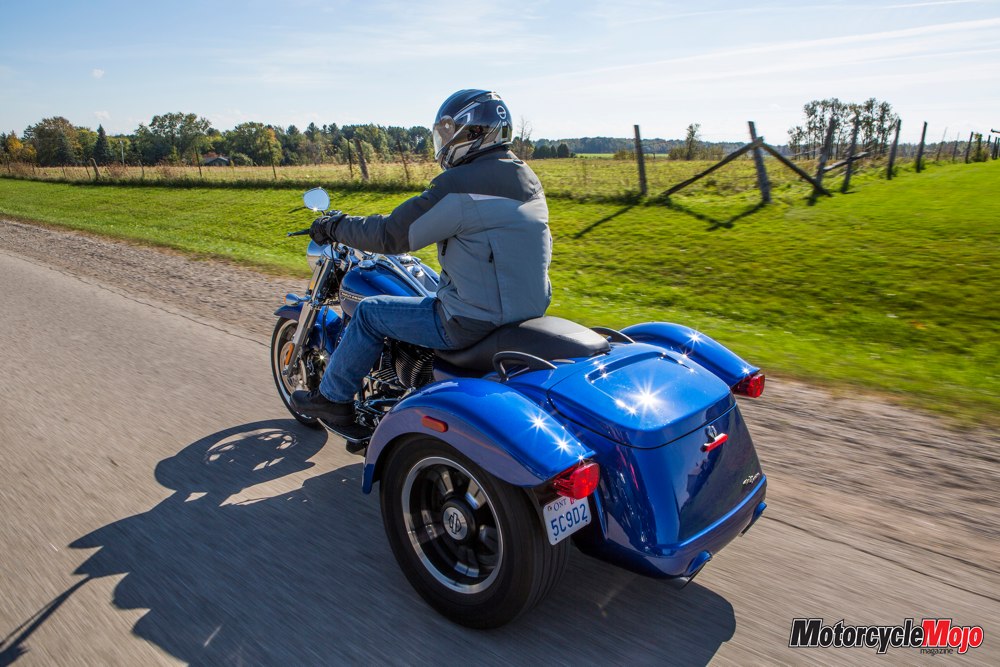 I know I will get more than a few people grumbling about this article because trikes certainly aren’t everybody’s type of freedom machine, but three-wheelers do serve a very important purpose in the motorcycle world and, I believe, are an important segment in the future of the motorcycle industry. There are plenty of reasons why you might be looking at a trike as a future ride, and if you are, you might not find one that is as sleek and good-looking as the 2015 Freewheeler.

Harley-Davidson’s newest offering to the three-wheeled world blends a traditional trike with a hot rod-inspired, stripped-down custom that looks as good sitting still as it does cruising down the highway.

Putting that Power to the Ground 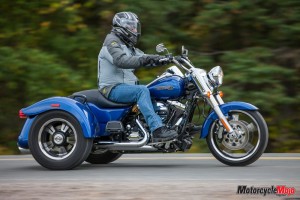 Getting this sporty trike down the road is the Motor Company’s air-cooled, high-output Twin Cam 103 cubic inch engine that pumps out an impressive 105 ft-lb of torque. Even for a vehicle the size of a trike, it uses that torque quite efficiently, accelerating from a stop up to highway speed quickly. The power delivery is smooth throughout the entire rev range, and the slick shifting, six-speed transmission takes little effort to row through the gears. The hydraulic clutch lever makes for an easy pull that won’t leave your hand fatigued if you get stuck in rush hour traffic. The clutch lever, like the front brake lever, is not adjustable.

Getting that power to the ground is via Harley’s well-established final drive belt to a pair of 15-inch Dunlop radials mounted on 5.5-inch-wide, stylish Enforcer cast-aluminum wheels. Upfront is a skinny 19-inch bias Dunlop wrapped around a 3.5-inch Enforcer wheel. Smoothing out the ride is a 49 mm front fork and air-adjustable rear shocks. 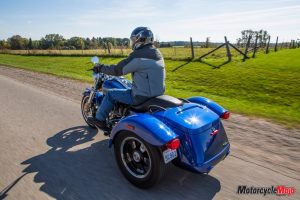 The Freewheeler employs linked brakes – the rear pedal activates the front and rear calipers, whereas using the front brake lever alone only activates the front calipers. The Freewheeler’s brakes are miles ahead of what the Tri Glide used to use for stoppers only a few years ago. A pair of six-piston calipers upfront slows the Freewheeler quickly with just a moderate squeeze on the lever. But the biggest change comes from the rear pedal – a function that on the older Tri Glide used to take almost all your strength to have a noticeable effect – now activates both the front and rear calipers for a noticeable difference in stopping power with a fraction of the effort.

Generally, a trike has the tendency to push through corners; that is, you have two big, flat tires pushing straight ahead while a single rounded motorcycle tire upfront is the only thing between you going straight and turning. In the process, it can have a penchant to hop through corners as the front tire tries to find enough traction to do the job. While almost all the roads I travelled were straight during the time I had the Freewheeler, it didn’t feel as if it was trying to push through the corners in the same way that I had previously encountered with the Tri Glide. Mind you, at 69 kg lighter than the Tri Glide, the Freewheeler is a lightweight, if you can call 491 kg a lightweight.

Typically weight pushing on a single front motorcycle tire without the ability to lean takes a fair bit of upper-body strength to manhandle, but the Freewheeler’s tall, 12-inch mini-ape hangers provides much needed leverage, making the task less strenuous. But as I said, I didn’t have a lot of curves to really put the Freewheeler through its paces.

The view from the rider’s seat is very pleasant and traditional Harley-Davidson. Along with its…