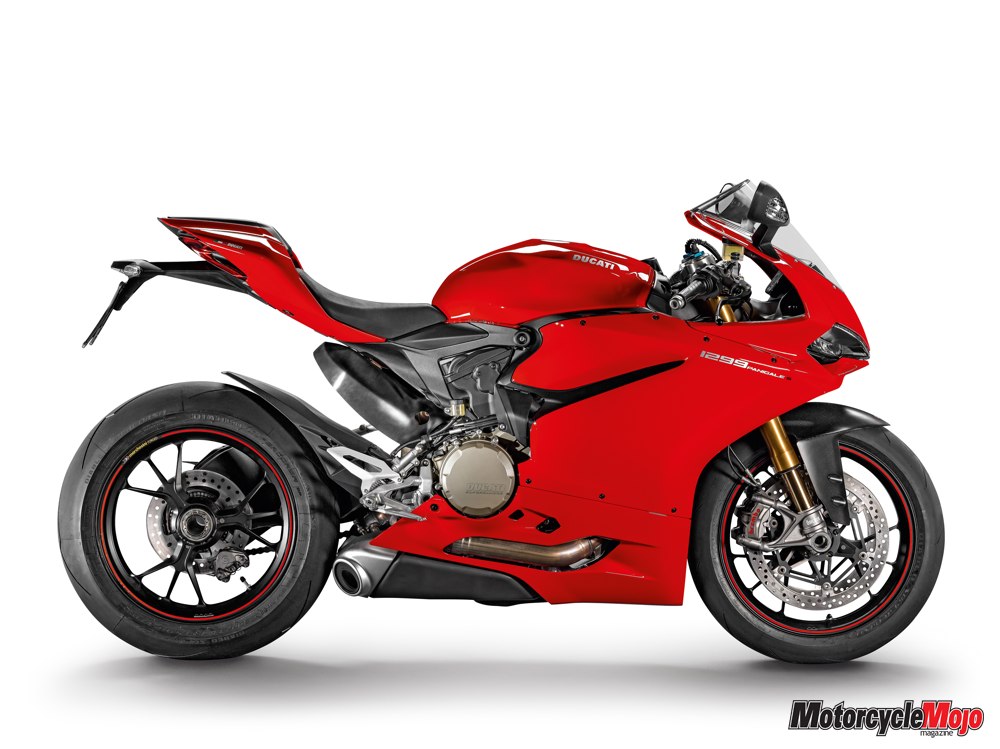 The hardest part of riding the 1299 S is trying to keep the front wheel on the ground – oh, and keeping your arms planted in their sockets

More power. That’s what tops the list of improvements in the evolution of supersport machines, and Ducati has upped the performance of the latest open-class Panigale, crossing the 200 hp threshold with a claimed 205 hp at the crankshaft. That’s 10 more than the previous generation Panigale, which was already a beast of a motorcycle. I had tested the R version of that bike at Circuit of the Americas in Texas almost two years ago, and found it to be visceral, forceful and angry. After riding the 2015 Ducati 1299 Panigale S at its press intro in Portimao, Portugal, I must say it is positively livid. 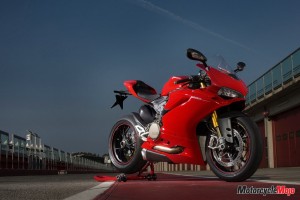 The 1299 uses a bored-out Superquadro engine, now displacing 1285 cc, which excludes it from WSB participation, though the 1199 R homologation model is still available, and still displaces 1198 cc. The 1299’s horsepower output is impressive, but what should really grab your attention is its prodigious torque, which peaks at 106.6 ft-lb, at just 8750 rpm. For comparison, the 2015 BMW S1000RR produces a peak of 83.3 ft-lb at 10,500 rpm, and the new Yamaha R1 has an almost identical 83.2 ft-lb at 11,500 rpm – and neither of those machines are slouches. It’s this monster torque that makes the Panigale such a handful on the racetrack. But more on that later.

The chassis received some minor tweaks that quicken steering response, and the bodywork has been altered to deal with the bike’s added potential for high speeds, with a wider fairing and reshaped side panels that improve aerodynamics. The windscreen is taller, and the tailpiece is now split into two pieces, again a feature that improves airflow. 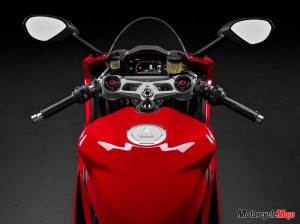 Traction control is something I was already sold on, and it was confirmed after riding the 1299 Panigale S at the fast and hilly Algarve International Circuit. This MotoGP racetrack includes a mix of decreasing and increasing radii corners, several steep elevation changes, and one very fast right-hand sweeper that opens up onto a 970-metre front straight. And there are plenty of blind crests that spill over into turns.

The first session was a warm-up to familiarize us with the track layout, though I had previously ridden here. Our hosts set the machines to Sport mode, and the 1299 S felt quite manageable, doing nothing to terrify me. The second session was done in Race mode. 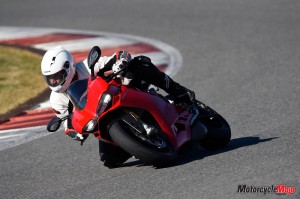 Race mode transformed the bike into a bona fide full-blown, full-stress superbike racer. Until you’ve ridden a 1299 Panigale, you really can’t grasp just how violently it accelerates. With the DWC set in Race mode’s default level 2 position (level 1 is least intrusive), the front wheel had no interest in maintaining contact with the pavement. And I’m talking at the top of fourth gear and going into fifth at speeds exceeding 220 km/h! The front wheel wanted to shoot skyward topping the crest going onto the front straight; it wanted to leave terra firma cresting the hill on the back straight; it wanted to part company with the asphalt pretty much any time the throttle was opened hard exiting turns, especially turns that exited on a slope.

The consensus among riders was that the ” wheelie control system behaved erratically, sometimes limiting wheel lift, sometimes scaring the heck out of the pilot as it mimicked a rocket launcher. I concluded that had we let the wheelie control do its job by keeping the throttle pinned, it would have worked as designed. However, for me at least, survival instincts kicked in and I would roll off the throttle slightly as the wheel shot up, which just confused the sensor inputs and messed up the system. Ideally, it would have taken more than our five sessions to experiment with the wheelie control, moving gradually from the highest-intervention level 8 to the trebuchet-like level 1. I couldn’t get past level 6 comfortably, which still felt skittish but manageable, though I also think it softened corner exits somewhat.

The traction control was much easier to get accustomed to, especially since I have much more experience riding with it. I settled on level 3, which allows for ridiculously hard acceleration out of corners with minimal intervention, as indicated by the seldom-illuminating TC light in the dash.

Electronic interventions like traction control add a necessary safety net when dealing out 205 hp, but they also make you a faster rider. With eight levels of TC intervention, you can start on the highest level and teach yourself to get on the gas harder and sooner when exiting turns while working your way into the lower numbers. It’s taken me a couple of years to get comfortable rolling the throttle exceptionally hard while exiting turns, but I can ride faster now than I ever have. The wheelie control I still need to work on, but with a bike like the 1299 S and a full day of lapping during a track day, I’d work my way down the scale.

The standard 1299 is equipped with a manually adjustable Marzocchi fork, a Sachs shock and a standard steering damper, while the S model I rode came with electrically adjustable Öhlins Smart EC semi-active suspension, and an Öhlins electronically controlled and adjustable steering damper. The default suspension setting within Race mode proved too soft after I picked up the pace, so on the third session I set the rear to Harder, leaving the Default setting up front (there’s Softer, Default and Harder). This greatly improved stability, as the bike had a tendency to squirm about when getting on the gas hard in the earlier sessions. Note that the bikes were equipped with high-grip Pirelli Diablo SuperCorsa SC DOT race tires, with a medium compound up front and soft in the rear, instead of the OEM SuperCorsa SP tires.

Before getting on the track for the penultimate session, I had set the suspension on my own, choosing the Harder setting front and rear. It took but a few turns to realize that I’d messed something up, as the bike squirmed around the way it did in the earlier sessions. My suspicions were confirmed post-session, after I went through the settings to find the suspension was indeed in the Default setting; I had neglected to confirm my settings by holding the set button to record them into the bike’s memory. At least I learned that the different suspension settings really do work and all the button pushing isn’t just a gimmick.

For the final session I set – and confirmed – the Harder suspension settings, left the DTC in level 3, set the wheelie control to level 6 and set out to win the moto-journo GP. I did notice that the bike pulled much more progressively during this session, having lost some of its adrenaline-pumping, heart attack-inducing thrust. I initially attributed this to the high level of wheelie control intervention, but later realized it was because a previous rider (we shared bikes) had set the engine mapping to medium within Race mode. The bike was still crazy fast; it had just lost some of its hellishly wicked midrange punch. I did recognize, however, that this would be the ideal setup if I were to take part in a full day of lapping, as it was less taxing on my mental capacity.

And you’ll need maximum focus when riding the 1299 Panigale. There’s currently no other machine on the market that offers its level of performance or its explosive acceleration. I would recommend the $26,695 S model over the $20,995 base model for its electronics package and its remarkable semi-active Öhlins suspension, though the latter will still provide heart-palpitating performance, just not the broader range of adaptability.

If you’re one of those “I don’t need no electronic nannies” riders, don’t buy a 1299 Panigale. You are going to get hurt because you’ll likely be tempted to turn off all the systems, which the bike allows you to do. If you are an advanced (not intermediate or less) track day rider with several years of open-bike experience, the 1299 will make you a better rider if you take the right approach. And that approach includes beginning at the highest levels of intervention and working your way through them with ample seat time and lots of experimentation. The 1299 Panigale has the range of adjustability to allow you to progress, and can be adapted to match your skill level, which I reiterate, should be high to begin with. And for your own sake, if you really want to exploit the 1299 Panigale’s performance, get yourself a season’s membership with your local track day club.”