First Steps
Whether on the track or on the street, the CBR300R is an ideal place to start

Looking at Honda’s entire range of CBRs lined up on the side of an empty racetrack brings out certain base instincts: mostly testosterone-induced ones. During such moments, it’s customary to claim the biggest, baddest machine in sight, prior to performing the ritualistic donning of colourful leather garments and carbon fibre headdress. This display then culminates in strutting, posturing and vigorous stretching. It’s all very National Geographic, I assure you.

With manly hormone surges subsided and inner animal instincts stowed away, I head straight for a CBR300R: the least likely bike in the group to catapult me into the forest from whence our kind emerged – or so I hoped. 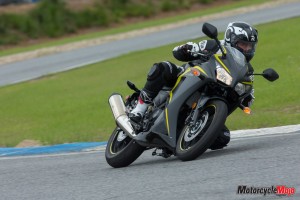 It wasn’t long ago that Honda’s little CBR125R revived the small-displacement bike market in North America. Those little tykes flew out of showrooms and scurried about Canadian roads, carrying riders of all ages and abilities. Soon after, swarms of them could be found terrorizing racetracks, which led to a spec race class, and very quickly people began to realize what they’d been missing out on.

The fast, flowing layout of Roebling Road Raceway in Savannah, Georgia, served as the stage onto which Honda’s fledgling CBR300Rs would take their first tentative steps. And it would serve as my first ride of the 2015 season.

On start-up, the mechanical whirring of the engine communicated the fact I was astride a single-cylinder, but there was not much sound associated with it. Sitting behind a gaggle of other 300s on start-up, all exuberantly thumping away, revealed a much more aggressive exhaust note than is heard from the cockpit.

A light clutch and typically smooth Honda six-speed gearbox got the bike rolling and accelerating smartly out onto the track. I would have liked to have had a gear indicator, though. On the plus side, I don’t remember a single missed shift or false neutral on any of the CBRs over two days of track testing. 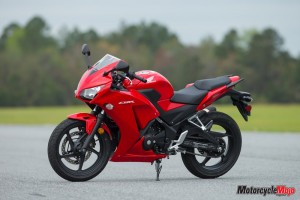 There’s a sharpness to this bike that became immediately apparent. Changes in direction happened instantly, and it would happily strike just about any line I chose through a corner.

A combination of light weight and stability is tough to achieve, but the bike’s 161.9 kg feels securely planted in a turn, and does a reasonable job of anchoring it at speed. If you’re considering this bike and need to travel on the highway regularly, it should be noted the CBR300R will happily sit at 100 km/h or more. Vibes are present at those speeds, but they’re not unbearable by any means.

The 37 cc bump in displacement over the outgoing CBR250R comes from an increase in stroke, with no change to the bore, resulting in a 17 percent increase in peak power for 2015. By increasing only the stroke, emphasis was placed on producing more torque in the bottom and middle of the rpm range. This translates into better acceleration when compared with the previous 250 cc model, making pulling out to pass less an exercise in strategic planning and more a natural reaction.

And pull out to pass it did, as journalists, one after the other, drafted past each other on Roebling’s long front straight, the single-cylinder pegged at redline and the speedometer clawing its way to 160 km/h.

On approach to the first turn’s double-apex right-hander, a handful of front brake revealed a somewhat spongy lever, albeit with acceptable braking power from the two-piston single front caliper and 296 mm rotor, aided by the single’s satisfying engine braking from a couple of quick downshifts. I should note that all of the 300Rs we had on the track had the optional ABS installed.

Turn one is more than 180 degrees and seems to go on and on . . . and on, giving the bike plenty of time to settle after being pitched in at the end of the straight. A couple of clicks of preload on the adjustable rear shock stiffened the ride a bit and did help to smooth things out for my 86 kg frame. The Honda drifted away from the first apex, before cutting back for the second, illustrating its composure and willingness to hold or change line at will.

When accelerating out of turn one and onto a short straight, the added torque could be doled out at full lean without concern of losing rear wheel traction.
Transitioning to a flowing left while maintaining full throttle allows the CBR’s momentum to build, this section of track feeling much like preparing to merge onto a highway, with the bike easily sprinting past the speeds needed for such workaday tasks.

Choose a Line, Any Line 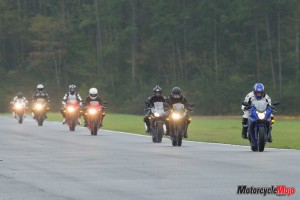 Turn three confronts the CBR300R just as it’s building a full head of steam, forcing a sudden change from sweeping left to hard right with multiple lines on offer to suit the apex clippers, late brakers or even the no brakers. And the CBR300R is happy to oblige any and all. By the end of my time with the little CBR, it became obvious the no-braking option was the fastest way around the entire track, but it required more faith than I could muster.

Roebling’s remaining three turns, much like the first three, require the rider to spend significant amounts of time hanging off the side, and the CBR300R was happy to carve through them, dragging pegs and even parts of the rider, in search of impressive corner speed and lean angle. It’s not quite a proper track bike owing to ground clearance issues and a slightly upright riding position, but it does a fine impression, and those very attributes make it a comfortable place to spend time on the road.

Going fast on a small bike takes an immense amount of trust and feel for the available grip. While I’ve heard some less-than-glowing reviews of the stock IRC tires, they repeatedly impressed with their ability to grip the track and the predictable manner in which they lost grip when the limits were reached. Perhaps the amount of heat we’d applied to the stock rubber through repeated lapping brought out its inner hero. If so, it would seem the CBR300R was having the same effect on more than just the rubber, as the bike became the weapon of choice for groups of journalists looking to mix it up on the track. The 300’s unintimidating nature and competent on-track performance meant that while the larger bikes were being assessed and then parked back in line, the baby blades seldom had a chance to cool off.

A Face Only a Mother Could Love

By coincidence (I think not) or by design (most certainly), having all of Honda’s CBRs lined up together served to illustrate key family resemblances, the most significant being that the new CBR300R now thankfully takes its styling queues from the line of bikes for which it’s named and not the VFR1200’s mug, as the CBR250R did.

The build quality is admirable for a bike priced at $5,199, even when parked next to the firm’s flagship CBR1000RR SP. At that price, ABS is included, or you could save 500 bucks and opt for the non-ABS model, but it’s a no-brainer; take the ABS, and think of it as insurance for a rainy day.

There’s a lot of value for the money in this increasingly competitive segment that has seen Yamaha, Kawasaki and KTM all drinking the small sportbike Kool-Aid Honda’s been mixing since the CBR125R arrived on the scene. New models in the 300 cc ballpark have recently debuted from each of the aforementioned manufacturers, though all are of different displacement: the Honda and KTM are singles, while the other two are twins. This mix of different approaches is sure to provide some heated rivalries and continue to push the evolution of the class, to the benefit of us, the consumers.

Despite having tested Honda’s new baby blade on the racetrack, it’s obvious that street riders will find much to appreciate about the CBR300R. They’ll also come to realize that small-displacement sport bikes offer an increasing level of unintimidating fun and competent, if not outright surprising, performance. You don’t need to straddle the biggest, baddest bike in the land to appease your inner animal. Take a ride on the CBR300R and tell me you don’t want to get off and strut around a little.

It Just Keeps Getting Better

After a long-term relationship on the street, it was time for a fling on the track.

There were a lot of good things to say about the CBR500R during my extended test in 2014. I spoke glowingly about fuel economy, practicality, good looks, relative value, ease of use and the fact that I had spent the majority of the time with a smile plastered across my grill.

All of those impressions were based on riding within the limits of the law on public roads, and I felt the experience provided a fairly complete sampling of the CBR500R’s abilities. Having recently returned from Savannah, Georgia’s Roebling Road Raceway with two days of lapping aboard the 500R under my belt, I’ve discovered there’s more to the story.

While Honda’s new 2015 CBR300R uses a single-cylinder with an increased stroke to develop torque low in the rpm range, the CBR500R uses a stroke and bore that are nearly identical, generating strong top-end performance. On the street, I wasn’t able to fully appreciate the engine’s flexibility, but on the track, the 500R showed off its long legs, topping 180 km/h on the straight, and the willing engine encouraged redline shifts. At no time did I feel the slightest bit of sympathy for the machine; this parallel-twin just feels right when it’s being rung out.

I did, however, have some sympathy for the stock tires, which finished the day looking as if they’d gone a couple of rounds with a combination blowtorch/belt sander. Much like I experienced with the tires on the CBR300R, there was always more grip than I expected, and once heated up, they performed admirably.
The 500R doesn’t steer as sharply as the 300R, though it’s more stable and has just enough power to give you that rush of speed many of us crave. You also need to be a little more judicious with the throttle applications at big lean angles, because the back tire can be spun up, but it would take a decided effort to chuck it into the weeds.

Roebling Road is a fast, flowing layout, and it rewards riders who dare to stay off the brakes, so there’s little opportunity to tax the CBR500R’s front and rear stoppers. A bit more firmness at the lever would be nice, though stopping power is good, and there’s plenty of feedback through the lever and front suspension to keep the pilot informed.

All that time on the track also highlighted the same issues experienced on the CBR300R: there’s just not enough clearance in stock form and the seating position is too upright. Nitpicky yes, especially for a road bike, but Honda’s the one that let us loose on the track, and besides, I can’t take all this positivity.

In all seriousness, I’m having a hard time coming up with reasons not to like the CBR500R, and after getting it out on the racetrack, I’ve come away more impressed and wearing an even bigger smile. Pricing ranges from $6,499 for the non-ABS model to $6,999 with ABS, and at those numbers, buyers can rest assured that they’ve made a fine choice.