In the spirit of the GSX-R, this streetfighter is designed for the sport-minded enthusiast looking for a comfortable upright riding position

When I was a lad, Japanese bikes were dominant, and fully faired sport bikes like the GSX-R750, with an impressive-for-the-time 100 hp and lightweight aluminum box-section frame, were pushing the drive for power and low weight that embodied the eighties. Inevitably, these bikes got crashed, but rather than spend close to the value of the bike in new plastics or have to claim off the insurance and send their already high payments through the roof, riders would strip off the plastic (and anything else deemed superfluous), slap on a set of higher tubular bars and a pair of aftermarket car headlights and hit the streets on a bike far cooler than the one that left the showroom floor. 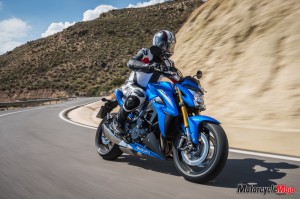 The streetfighter was born, and perhaps the GSX-R750 made for one of the best, with its tightly finned air- and oil-cooled engine, unmolested by its aluminum frame that bent around the motor, only to be covered up by a large plastic fairing. This style of bike proved to be immensely popular in England – where I misspent the majority of my youth – though it took the main manufacturers another decade or so to catch on to the idea and sell production streetfighters direct from the showroom floor, thus negating the need to crash your sport bike first.

Initially, the streetfighters took the form of a previous-generation sportbike motor, detuned and wrapped in a steel frame and lower-spec suspension and brakes. Suzuki’s 1200 Bandit hit the world stage in 1996, using a bored-out and retuned GSX-R1100 engine in a tubular steel frame, and became an instant hit, especially among hooligans. As time passed, the streetfighters got more sophisticated with higher-spec parts and retuned engines, not just to tame the wild top-end power, but to boost the low- and mid-range – just what you want for real-world street riding.

Fast-forward to 2015. The GSX-R is still Suzuki’s flagship line of supersport bikes, and the Bandit has evolved into more of a standard-type touring machine in the shape of the GSX1250F, leaving a space for a new line of streetfighter-like machines. This is where the new GSX-S fits in, with two versions: the 750 and 1000 – both using Suzuki’s GSX-R motors (suitably retuned), but in a high-spec chassis. I was invited to Alicante, Spain, to ride the GSX-S1000, an invitation that was hard to refuse, taking into account that most of Eastern Canada was still being ground away by the huge glacier that we optimistically call winter. 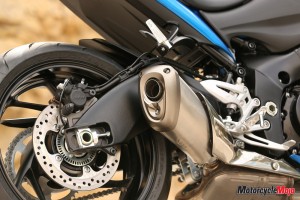 That engine retuning has been achieved courtesy of new cams and some modifications to the intake and exhaust systems, but interestingly, Suzuki claims that it did not want to lose the Gixxer’s top-end howl and rush of power in the process. Surprisingly, the GSX-S doesn’t come with any ride mode options, which seem to be de rigueur these days, instead opting for only three traction-control modes, with the most intrusive one effectively being Rain mode, which prevents any rear-wheel spin in the wet. The aluminum frame is new and lighter than the Gixxer’s (it has less power to handle, so why not?), and a fully adjustable inverted fork with Brembo four-piston monobloc brakes up front shows that the company is treating the GSX-S line seriously. And, of course, bars are of the tubular variety, with Suzuki opting for a splash of cool by fitting Renthal Fatbars, normally reserved for higher-end dirt bikes.

Styling-wise, Suzuki has come up with its own look for this class of bike. Where Kawasaki has embraced the Transformer/Manga comic style for its Z1000, Suzuki has opted for a muscular layered design it calls “the crouching beast.” It’s even gone so far as to make the LED position lights aside the headlight to offer a fanged look. Whether this works is up to the individual, but my initial skepticism morphed into appreciation after seeing it in the metal and after a day’s good thrashing in the Spanish hills.

The Canadian contingent arrived a day early at our hotel just outside Alicante on the Spanish Mediterranean coast. This gave us a much-needed opportunity to acclimatize not just to the time difference, but also to the fact that snow had been replaced by parched brush and potholed abominations of so-called roads with polished squiggles of perfect asphalt. The first load of unlucky journalists had had to endure cold temperatures and pouring rain, and although the thermometer was struggling to get much above lukewarm by the time we placed our lucky arses on the GSX-S’s accommodating seat, the skies were brilliant blue and the deserted mountain roads beckoned us to unleash a little bit of hooligan on the blue beast.

The riding position is generous, with a slight lean forward to the wide bars (good news for the 40-plus crowd that this bike is aimed at). The trend on most bikes now is to try to keep the seat height low to increase the spectrum of potential riders, and at 815 mm, the GSX-S is identical to its closest competition, though a little cramped at the knees for my admittedly lanky frame. But the seat is roomy and quite plush, and I found the bike to be a pretty comfortable experience. Despite it not having a windshield, I find there’s nothing better than the smooth, clean airflow of a naked bike – until things get wicked up, of course. That is anything above 110 km/h on the GSX-S, at which point you start to tense against a strengthening pull on the top of your helmet. On Spain’s contorting mountain roads, this only becomes noticeable on the short straight sections between the almost endless curves. Canadian slab would be a very different experience.

Suzuki has done a great job on the Gixxer’s engine retune. For starters, it took the “long stroke” engine from the 05-08 GSX-R1000, offering the most torque by design. And although the company sacrificed some of the top end in order to boost the lower range, with a claimed 143 hp on tap, the GSX-S is still a hoot to ride. The power delivery is smooth and predictable but never boring, and should keep even the most hardened sportbike rider amused. There’s a very broad range of torque enabling the rider to putter along in higher gears but still be able to wick it up without the need to drop some gears first. Above 9000 rpm there’s a surge of power, and if you can hold on against the building tsunami of wind, you can ride it all the way up to the 11,500 rpm redline.

There is one fly in the ointment, though. Just off idle, the GSX-S has a noticeable lag. It feels like some driveline snatch, but is most likely a blemish in the fuel injection, which means that just as you’re coming out of that perfect corner and reapplying the throttle, there’s a moment’s pause. It’s just enough to upset the line of the bike, though by day’s end, I had managed to minimize the effect with a combination of a gentler wrist action, keeping the braking on as I applied the throttle and erring to higher gears, where the effect lessens. Hopefully Suzuki will have time to tweak this out before the bikes appear later in the summer.

The chassis was more than capable on these roads, making the bike feel light and very stable; the wide Renthal bars offer plenty of leverage to push the bike into and out of the myriad corners we faced that day. Although the suspension has been built to a price, I found that it wasn’t too soft and always gave me the feedback I needed to attack the roads without pushing the risk envelope. Likewise, the Brembo brakes were keen and progressive so that I could scrub off speed with confidence before flopping the GSX-S into the next glorious series of ess bends. I don’t recall using the rear brake, but it’s always good to know it’s there if needed. The bikes we rode came with ABS, which will be standard on Canadian models.

At time of writing, Suzuki Canada had still to announce the price for the GSX-S1000 but in the U.K., it’s positioned about $1,000 cheaper than Kawasaki’s Z1000, which would place it at a little over $12,000 and very close to Yamaha’s FZ1. That would be a good deal, and if you can find happiness on Canadian roads without a windshield, then it’s a bike that would serve you well, especially if you have a bit of hooligan in you.