The Motor Company shocked the motorcycle world when it announced an electric motorcycle.
No one saw that coming

Take what you know about motorcycles and throw it out the window. Riding LiveWire, Harley-Davidson’s first electric motorcycle, is like riding something straight out of the future.
Sleek, bold styling, with clean lines and a strong, streetfighter look, the LiveWire has no gearbox, so therefore no clutch lever to pull or gears to change. There is also no rumbling, vibrating, traditional-sounding growly engine between your legs; the machine is virtually silent when running. That is, until you wind on the throttle and hear the high-pitched turbine-like whine – which Harley says was as carefully designed as the rest of the bike – as you propel forward with instant torque. 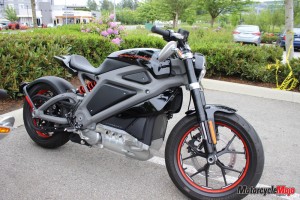 Project LiveWire is Harley-Davidson’s way of redefining its historic brand and leading the way in innovative technology. This is a reinvention of the way we ride.
LiveWire’s first stop in Canada was at Barnes Harley-Davidson in Langley, B.C., and I was lucky enough to be one of a select handful of Canadians to be the first in the country to ride the motorcycle as part of the Project LiveWire Experience tour. You see, the LiveWire isn’t a production bike, but rather a concept, a prototype made specifically to test the waters of reinvention and product development by utilizing consumers’ opinions and ideas as a way of innovatively launching Harley-Davidson into the future of electric motorcycles.

Even those who don’t ride can sample Project LiveWire by hopping on the Jumpstart riding simulator. The Experience tour began in the United States in 2014 and is continuing this year, this time also visiting Canada and Europe.

Designing for the Future 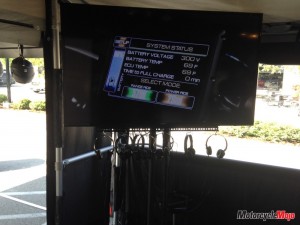 With nearly two dozen gleaming prototypes ready to be taken for a ride, I felt as though I could have been on the set of Avengers: Age of Ultron. Somehow Harley-Davidson managed to retain the iconic look of what we expect from them in a modernized, flat-black, café racer-styled machine that just happens to run on a 220-volt, longitudinally mounted electric motor powered by a lithium-ion battery. From the single-piece cast-aluminum frame and swingarm to the TFT dashboard and LED headlight, each detail is of carefully crafted quality.

After listening to a short audiovisual presentation about the LiveWire, it was nearly time to head out on our ride. Throwing a leg over, I was surprised to find that the bike was smaller than it looked, with a slim, streamlined body and a low seat height. I could easily sit flat-footed and it was a comfortable reach to the handlebars.

From there, we were instructed to switch the button to ON, which powers up the modern LED touch-screen display – more reminiscent of an iPhone than a motorcycle dashboard – and told to select either Range or Sport mode. I didn’t even hesitate to choose the Sport mode before pressing the traditional-like starter button. With a soft whir, the three-phase AC motor was activated and the bike was running. Or was it? With no sound whatsoever coming from the motor, it was a real shift in mindset for me to remember that the bike was in fact on and very ready to go. 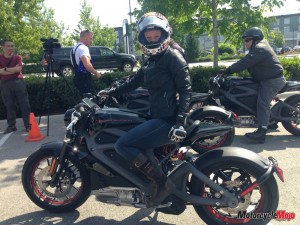 As the lead rider pulled out, I eagerly rolled on the throttle to take the first position in line and had to remind myself that there was no clutch. It seemed dumbed down, a simplified version of a motorcycle that only needed a little twist of the wrist to make it go, and go fast. They’re not kidding when they boast about the torque and the fact that it can go from zero to 100 km/h in less than four seconds. This is a very fast and deceitful motorcycle that hides its instant torque and available power under a blanket of silence. I can see the appeal of such stealthy simplicity, especially for commuting. It’s a beautifully deceptive motorcycle.

The Ride Was Too Short

During the short ride, the LiveWire seemed to handle extremely well, with accurate and predictable steering. It didn’t feel particularly heavy or light for that matter, just easy to navigate. It did what it was told. I wanted more than just 15 minutes on the thing. At one point we were on a roundabout and I felt like embracing the rebellious nature of a Harley-Davidson and ditching the group ride and rail it around the traffic circle over and over in an attempt to see what the LiveWire could really do. I wanted to see how far it could lean over, how stable the upside-down Showa Big Piston fork and fully adjustable cantilever shock felt at speed, what it would feel like to touch my knee to the ground; but I reluctantly followed the rules. It felt sporty and fast, as if it could certainly hold its own on the racetrack.

One thing that stood out was the regenerative braking, which is similar to strong engine braking. When you close the throttle to decelerate, the electric motor turns into a generator to recharge the battery. This is instantaneous and quite sudden (something they warn you about in the presentation), so you don’t need to use much traditional braking, except for when you come to a complete stop. This could be an issue if the bike actually went into production. If you don’t engage the brakes, the brake lights won’t come on, so people behind you won’t know that you are slowing down, perhaps until it’s too late. Maybe an integrated system that engages the brake lights when you close the throttle would be helpful. The single-disc, pin-slide, twin-piston front brake stopped the LiveWire easily, but again, I didn’t get a chance to forcefully grab a fistful. There is no ABS on the prototype model.

The range of the bike after 3.5 hours to fully charge the battery is approximately 80 km with a limited top speed of around 148 km/h. Seventy-four horses power the LiveWire with 52 ft-lb of torque, and it tips the scales at roughly 208 kg.

There are no guestimates as to how much the LiveWire might cost, because it isn’t in production. Harley-Davidson will use the information gathered from consumers in its “post-test-ride survey” to decide if and when the bike may be available for sale. In the meantime, it remains a beautiful work of mechanical art that a lucky few of us have had the chance to ride and would love to see it come to fruition, as a way for us all to ride off into the future.