Offering a helping hand when it’s needed the most

What would you risk for the freedom of riding the open road on two wheels? What would you be willing to give up for one more day in the wind? Perhaps these aren’t the thoughts that go through our minds each time the engine fires and the gloves go on, but there are times when every motorcyclist pauses to reflect. Sometimes the moment comes while we’re alone in our helmets or when surrounded by those we most enjoy being with on the road. The very act of exposing yourself to the elements, tearing headlong through their sensory stimuli is as much about feeling as it is doing. And when we pause to reflect on life’s great questions and the precious few answers our kind has stumbled upon, we inevitably come to the mortality of our predicament and the very un-philosophical question: What happens if I go down? 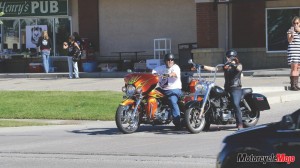 In 2012, Glenn Lyth and his daughter, Ashlee Atkin, were out enjoying a summer ride in the Calgary area
during the evening rush hour when their day – and the rest of their lives – was changed forever.
With Ashlee trailing close behind, the two were making their way through traffic when a vehicle changing lanes cut off Glenn. Trying to avoid the car, he began braking, but with nowhere to go on a crowded street, he collided with another vehicle towing a trailer. Ashlee, having had a front-row seat to the incident, was off her bike and at her father’s side as he began to get to his feet, unaware of the grave injuries he’d suffered. Thankfully, Ashlee was well aware of the situation and persuaded him to lie down and wait for the EMS team to arrive.

It was soon discovered that Glenn had broken his back, neck and scapula, as well as several ribs. He’d also sustained major nerve damage and was covered from head to toe in road rash. That first night in the hospital, Glenn coded twice, requiring emergency responses from the hospital staff to save his life. During this time, no one was sure if he’d make it.
An event of such magnitude can have a terrible effect on not just the injured, but also the family and friends around the individual; it tests relationships and partnerships and, unfortunately, can even tear them apart. But like the forger hardens his blade, so too can a tragedy harden the resolve of a group, a family, determined to achieve their goal. And for this bunch, that meant a long road to recovery and a day when father and daughter could ride again. 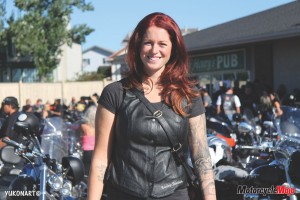 Determined to see this through, Ashlee left her job to provide care for her dad around the clock. That decision translated into an immediate loss of income; plus, none of her daily expenses or travel
to and from the hospital was covered by insurance.
Over the coming months, Glenn made great strides on his road to recovery, and that’s when Ashlee and Elizabeth Cloutier had the idea to help others in similar predicaments. And so was born One Broken Biker.

One Broken Biker is a not-for-profit organization that uses poker runs, silent auctions, donations and merchandise sales to raise money to help injured riders and their families. The first of their events took place in September 2012, and they now hold two poker runs and a silent auction in the Calgary area each year. The proceeds go directly to those who need it most in the form of funds or care packages. 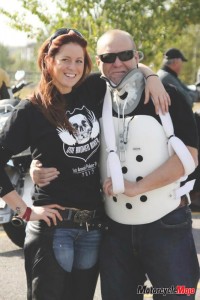 My first chance to meet the team at One Broken Biker came at the 2016 Calgary Motorcycle Show, where their small booth was causing a rather large traffic problem for the organizers. It would seem that people know a good thing when they see it, and the perpetual roadblock of smiling supporters visiting the One Broken Biker booth spoke volumes in a sea of profit-driven exhibitors.
I was introduced to the organization’s president and inspiration, Glenn, looking none the worse for wear, and standing tall and proud next to daughter and director Ashlee. They are as genuine and enthusiastic about their cause as we’d all like to imagine such inspirational people would be. Having met with many not-for-profit organizations in the motorcycle industry over the years, I can tell you from experience that their success is measured by the people they attract – both volunteers and supporters. And were it not for the initial contact by one particular volunteer, Mr. Glen Prigotzke, I may not have had the opportunity to meet the One Broken Biker family or tell all of you about their work.

You can find out more about One Broken Biker via its website, onebrokenbiker.org, or connect with them on Facebook and Instagram. You can also send them an email at info@onebrokenbiker.org with any questions. And remember, they’re always looking for volunteers and donations to help the cause. Think of it as paying it forward or even as a bit of insurance for a fellow rider – or maybe even yourself. Riding a motorcycle, like every moment in life, is a calculated risk, and sometimes the odds don’t work in our favour. Having a helping hand can make all the difference when you’re just trying to stand up, dust yourself off and get back in the saddle again.