Learning to slide around corners isn’t easy, but it sure is fun trying

I enjoy getting out and playing in the dirt and on bush trails as much as I like street riding. But being generally a street rider, it isn’t often that I get to sample a handful of brand-new motocross bikes. Honda Canada invited Motorcycle Mojo to attend a training session at Flat Track Canada’s home track in Paris, Ontario, for basic training and to sample these specially modified Honda motocross bikes on the dirty oval. 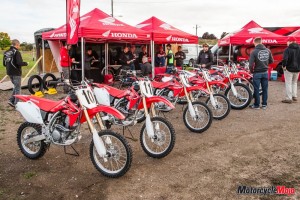 Flat-track racing, also commonly known as dirt track, consists of various size motorcycle classes racing on tracks made from hard-packed dirt or clay, or a mixture of the two, and that range from an eighth mile to half-mile ovals, at least in the sanctioned races under the Flat Track Canada banner.
The basics of flat track frivolity are relatively simple: two straightaways and two corners, and in its most basic form, the idea is to go around the track in a counter-clockwise fashion as fast as you safely can until the flagman waves the checkered flag.

But like most things in life, the basics tend to get boring quite quickly, and you soon feel the need to progress to another level, which means taking professional training.
Flat Track Canada is not only a sanctioning body for a southern Ontario series of flat-track races, it also holds regular training sessions for all skill levels on its own short track.

Racing at a Grassroots Level

Over the years, flat-track racing has had its ups and downs. After the economic nosedive of 2008, only about 10 to 15 racers would turn out and just a few more spectators, but Aaron Hesmer, previous speedway champion and president of Flat Track Canada, told me these days, it isn’t uncommon to have 100 to 200 racers and 3500 spectators attend the races. This is partly due to the hard work that Flat Track Canada has invested into the sport, and the fact that some of the world’s best MotoGP racers also take to the flat track for fun and practice. Flat-track racing is very entertaining to watch, and the grassroots races take place at local fairgrounds and horse-racing tracks, making the action accessible to just about anyone. 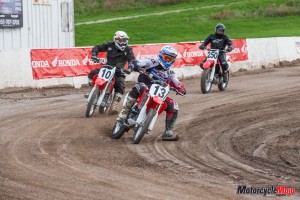 It’s really quite a spectacle to watch the pros rip down a straightaway at blistering speeds as they violently toss their bikes into a slide at speeds that hit 145 to 175 km/h, depending on the track, handlebar to handlebar, “backing it in,” as it’s called, with the back end sliding around the corner at a 45-degree angle, bikes leaned over and the riders “steel shoe” scraping the dirt to offer some sort of perceived balance. Coming out of corners 2 and 4 at a slightly slower speed, the bikes straighten up and the engines scream as the throttles are pinned for a drag race to the next corner. If you happen to be standing at corner 1 or 3, you’ll want to protect yourself from flying stones, because these guys and gals really kick it up.

But enough about the pros. It takes a great deal of skill to master the “slide,” and this is where Flat Track Canada helps in the sport by also providing professional training on Honda bikes
at its eighth-mile track.

We started the chilly late-September morning with a rundown of the track and an introduction to the pro riders in attendance, followed by basic training from Hesmer. The pro racers on hand for the day’s training were Doug Lawrence, 2015 Open Expert Champion; and Doug and Steve Beattie – both Beattie brothers have been champions with illustrious careers in Canadian flat-track racing as well as racing south of the border. Steve, who has been racing pro since the age of 14, is also a flat track suspension guru and owns 26 Suspension, a company that specializes in setting up flat track suspensions. To say these four guys know a thing or two about the finer points of flat-track racing would be a gross understatement. I was stoked to be getting training from the best.

I May Never Walk Normal Again 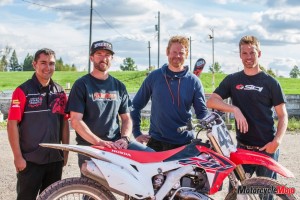 After a quick rundown of which lines to follow on the track, I was directed to the gear trailer to find a steel shoe that would fit my left boot. The steel shoe slips onto your existing boot and is a very basic design; it probably hasn’t changed from its initial design several decades ago. Its sole purpose is to help your left boot slide along the track surface as your left leg hangs out to support you and the bike while leaned over in the corners. Soon, the sound of clomp, scrape, clomp, scrape is common as the right boot clomps and the left steel shoe’s heel scrapes along the ground.

After a few times out on the track, I soon began to feel the fatigue on the muscles of my left inner thigh and hamstring from the heavy motocross boot and steel shoe hanging out off the bike, to the point that I couldn’t even lift my foot onto the foot peg anymore. It was more like a useless appendage just along for the ride, or drag, as it were.

Getting a Bike Race Ready

Honda is a sponsor of Flat Track Canada, and it supplied the new 2016 CRF150R, 250R and 450Rs that were available to ride. The bikes are slightly modified for dirt track use by changing the front wheel to 19-inch, which is devoid of any brake paraphernalia, changing and tuning the suspension on both ends and lowering the bike about 10 cm, and adding flat track specified rubber. There are brakes on the back end. The cost of the mods add about $1,300 to the price of the bike, so if you have an aging motocross bike kicking around, or find one at a decent price, you could get into flat-track racing at a very reasonable cost.

It had rained a couple of days earlier, which kept the dust from the track to a minimum, but after a dozen or so bikes rip around the track, it dries quite quickly. The corner slides were coming along and I was fine with it being dry, but during our lunch break, the water truck was dispatched to soak the track. The dry track was useful for getting down the basics and understanding the differences in the bikes; the wet track just made things greasy and added a whole other complexity to the day. Corners 1 and 2 were particularly wet and muddy. Perfect!

As you could imagine, sliding the back out introduced a number of low side slides for some of the riders, but at one point coming out of a very wet corner 2, I was sideways on the track and, as luck would have it, at just enough lean to prevent a high side, but not quite enough for a low side, my left leg screaming but doing its job of holding me up. I was completely out of control, but managed to save it just before running off into the infield and hitting a steel post that I was headed for.

Personally, I preferred the CRF250R over the 150 or the 450. While the power from the 150 would have been plenty, it felt too small in stature (and too cramped to lift my left leg), and the 450 was too powerful for this novice on a small track. The extra speed of the 450 would’ve been fun on a longer straight, but I know that would have just gotten me into bigger trouble in the corners.

I have to say that the expert tutelage of the pro riders helped my sliding immensely. I have a long way to go to be a competition-grade racer, but the beginner fun factor was over the top.

Interestingly, most flat track racers don’t retire from the sport as early as other racing disciplines, and therefore enjoy a wide age range within its racing community, including kids as young as four years old.

Check out Flat Track Canada at flattrackcanada.com. Or, if you have the desire to try a fun motorized sport, learn the finer points of backing it in; or just to see how out of shape your left leg is, go to goflattrack.com for dates in Ontario, Manitoba, Alberta and British Columbia. And they’ll supply the bikes and all the gear you’ll need.