There are very few modern motorcycles that can evoke a true nostalgic sense of motorcycling. These bikes have a direct link with the past, and even new riders born well past the era when these machines were at the top of their popularity can recognize their authenticity. The Harley-Davidson Sportster and Triumph Bonneville are among the most notable of these machines. The Sporty was introduced in 1957, followed just two years later by the first Bonnie. 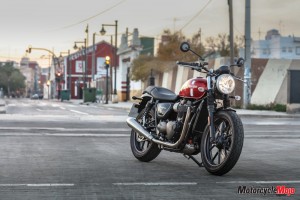 While the Sportster has enjoyed an uninterrupted run since its introduction, the Bonneville has experienced a few gaps in production, brought on by door-shutting financial woes its maker had over the years as it tried to compete with the onslaught of more reliable and more affordable Japanese motorcycles.

Fortunately, the English bike maker overcame those dire straits, and in the early 1990s, a businessman and motorcycle enthusiast named John Bloor officially resurrected the company. After a number of years producing non-traditional English three- and four-cylinder machines designed to compete with the Japanese bikes that had contributed to the company’s past failures, Bloor tapped into the company’s heritage and produced the New Bonneville in 2000. Mimicking the styling of the 1959 original, this updated Bonneville was powered by either a 790 cc or 865 cc parallel-twin (the latter becoming the sole displacement after 2006). Aside from gaining several model variations over the years, the Thruxton and Scrambler being among the more popular versions, the basic bike hadn’t changed much since its reintroduction.

Enter the Triumph Street Twin, one of five next-generation Bonneville models launched for 2016. While the current Bonneville has enjoyed a long 15-year run, and is still the basis of the 2016 Scrambler, Speedmaster and America models, the Street Twin is an entirely new motorcycle. It is Triumph’s entry-level Bonneville (not to be mistaken with entry-level bike), using cast wheels, a single front disc and minimalist trim. It also uses a five-speed gearbox, as opposed to the new 1200 cc Bonnevilles (two T120s and two Thruxtons), which have six speeds.

The biggest news across the second-gener 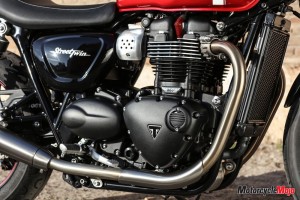 ation Bonneville range is the engine, which is liquid-cooled. The liquid cooling is very well disguised, with large, functional cooling fins still covering the head and cylinders, and a narrow radiator nestled between the front downtubes.
The engine displaces 900 cc, and uses a 270-degree crankshaft and eight-valve head. At 3200 rpm, it produces 59 ft-lb of peak torque, an 18 percent increase over the outgoing Bonnie engine. Not too surprising, considering the new engine’s focus on low-end torque; however, it translates to a drop in peak horsepower from the previous model’s 68 hp to 54 at 5900 rpm. But the horsepower curve now shows up to 22 percent more power in the real world riding range of 2750 to 4750 rpm. The trade-off for this reduced maximum power, aside from the higher torque, is considerably better fuel economy, claiming a significant 36 percent improvement compared with the air-cooled engine, at 3.9 L/100 km combined city and highway. This has allowed the use of a 12-litre fuel tank (previously 15.9 litres) while still being able to achieve a 300 km range. The smaller tank is perhaps what has contributed to a lighter wet weight, at 217 kg versus 225 for the 2015 Bonneville.

The Bonneville has caught up with modern times, and it now uses a ride-by-wire fuel injection system. This means it also gets standard traction control, and they’ve included another new electronic aid: standard ABS, a first for a Bonneville model. And to reinforce the Bonnie’s penchant toward modernity,
it has an LED taillight, and a USB port under the seat so you can charge your smartphone while you ride. An optional USB port relocation kit can be installed if you use your smartphone as a GPS and want to mount it by the handlebar. 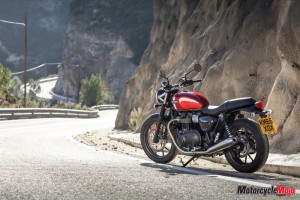 Triumph held the Street Twin’s media launch in Valencia, Spain, in early December. Approaching the long row of test bikes before we headed out for a 220 km ride through the mountains west of the city, I admired the Street Twin’s unembellished styling. There’s an appealing mechanical simplicity to the Street Twin; the folks at Hinckley haven’t tried to wow you with bedazzling paint schemes or flashy chrome – it is instead refreshingly understated. It captures instantly the essence of what a classic Brit bike has always been in my eyes: simple, slender and, if not overly sophisticated, at least quite charming.

Swinging a leg over the bike, it feels light and surprisingly narrow, especially at the knees, where the smaller gas tank is deeply scalloped. The riding position is relaxed and upright, and there’s a modest amount of legroom for my six-foot frame. The seat is flat and only marginally leans forward, and at 750 mm high, it’s an easy flat-footed reach to the ground. When seated, all that greets your eyes is a large analogue speedometer with an LCD display within its face that can be configured to show various fuel consumption figures, time or two trip meters by using a dedicated button on the left switch assembly. There’s also a small but easy-to-read gear indicator, and when at a stop, you can turn off the traction control.

Once fired, the engine emits a classic, deep rumble out the tailpipes, and a more contemporary whirring of balancer chains. The clutch is beginner-bike light, and a gentle, downward nudge at the shifter gets the bike into first gear. With its surprisingly tall first gear, I had to ride the clutch a bit to get moving, though the engine’s high torque output makes taking off from a stop a breeze. The gearbox is light and precise, each successive gear change requiring a very short, light tap on the shift lever.

We meandered through the streets of Valencia, where the Street Twin’s light, neutral steering is emphasized as we zigzagged from one roundabout to the next before heading out of the city. Its bountiful bottom-end torque got the bike up to speed effortlessly as I followed our guide, Triumph chassis engineer and test rider David Lopez, who launched from traffic lights as if they were drag strip staging lights.

Although the traction control is perhaps redundant on a bike with such an easily manageable powerband, it does provide a safety net that just might save your backside should you grab a handful of throttle rounding a corner on your way home some cold, wet evening. I don’t know if I triggered it on this ride, but if I did, it was completely invisible.

As we entered the mountains, the roads presented a mixture of long, fast sweepers and tight switchbacks, all of them tablet-top smooth. The Street Twin is an absolute delight here, easily transitioning through esses with nary any effort, while displaying uninterrupted stability on the straight bits.

The suspension, which is adjustable only for rear preload, is tuned more for comfort than for speed. It is plush. In fact, it’s adventure-bike plush, though this doesn’t hamper the ride, which we maintained at a modestly spirited pace. At 220 lb, I caused the rear end to rebound more than once, but only when leaning the bike into fast sweepers; otherwise, the bike follows through turns confidently and with little effort at the handlebar. Some riders note that the suspension might be too soft for a fast pace, to which I retort that this isn’t a supersport and is unlikely to be ridden as such by almost anyone who buys it. In other words, the suspension is just fine, and tuned to deal with our less than ideal Canadian tarmac.

Picking Up the Pace

Even though I didn’t increase the rear preload from its minimum setting until the last leg of our ride, the suspension never bottomed and the pegs never touched the ground, proving to me that the bike is certainly capable of handling a faster pace. With just one click at each shock’s preload adjuster, I raised the rear just a bit, which sharpened the bike’s steering a touch.

The engine pulls with gusto from idle through the low- to mid-rev range, but power flattens as it approaches its rev limit, which we’re told is at 7000 rpm.
The engine is rigidly mounted to the frame, but the dual counterbalancers combine with the vibration-reducing 270-degree crankshaft to make the Street Twin among the smoothest motorcycles I’ve ridden. The mirrors are small but offer an unobstructed rear view, and remain almost perfectly clear regardless of the speed.

We returned to our seaside hotel late in the afternoon, from an excellent ride that I would have gladly extended by a couple of hundred kilometres. The Street Twin is genuinely fun to ride, with no overwhelming traits; it’s just a well-balanced, nice-sounding machine that agreed with me from the moment I first let the clutch out in the morning. And I don’t think that feeling is likely to fade with long-term ownership.

The 2016 Triumph Street Twin is a simple, inexpensive (price starts at $9,900) and ultimately very appealing motorcycle, perhaps because of the lack of frills and embellishments, and in any case, if you decide you do want to dress it up, Triumph has released more than 150 accessories in conjunction with the machine. It’s a satisfyingly well-rounded motorcycle, a trait that was revealed during post-ride discussions with my journo colleagues: We were all hard pressed to find something we didn’t like about the bike.