Forever an enthusiast, entrepreneur and champion of all things motorcycling

Walt Healy championed motorcycling. It didn’t matter what brand you favoured, how big the machine was, or whether you preferred twisting the throttle while riding in the dirt or on the street – or both, Walt was always ready to extol the virtues of powered two-wheelers.
And Walt had plenty of chances to share that passion. For close to 70 years, he presided over his dealership, buying, selling and fixing motorcycles. I interviewed Walt in 1996. With my notebook and pen in hand and recorder on his kitchen table, we spoke about his motorcycling exploits. Many of the quotes in this story are from that session. 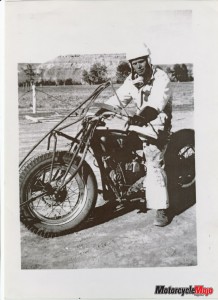 Born in 1913 and raised in Calgary, Walt was always envious of the Indian Power Plus that leaned against the fence at Morris Greenhouses, a local horticultural establishment. As a lad, he’d pass the motorcycle daily while walking to Hillhurst School. “One of these days, I’m going to get a motorcycle,” Walt recalled saying every time he saw the Power Plus. It didn’t have to be an Indian, just something with an engine.
By 1926, Walt was working part time, pedalling a bicycle with carrier attached for the Diamond Motor Company. The business sold Graham-Paige automobiles from a facility at 230 6th Avenue SW – now the site of Bow Valley Square. Walt delivered parts for Diamond, and he earned enough money to buy a 2.75 hp, 350 cc 1914 Douglas motorcycle for $15. The Douglas had a flat-twin, fore and aft engine arrangement, and final drive was by belt to the rear wheel. Walt gave up the bicycle and used the Douglas to increase the speed at which he could deliver parts for Diamond.
He also rented out the Douglas to neighbourhood children. According to Walt, he’d give them rudimentary riding instructions and then charge them five cents to take the machine down the street and back. “But if they went around the block, out of my sight, it was 10 cents!” he told me.
It was in 1926 when Walt became a founding member of the Calgary Motorcycle Club – a group that still meets the first Wednesday of every month. The CMC, which turns 90 this year, is dedicated to both touring and off-road riding, and there’s a spot for anyone interested in motorcycles.

Pick Up and Delivery

Walt was 16 when he got a job delivering groceries for the Piggly Wiggly food market. He earned $16.50 a week using his motorcycle to lug bags of potatoes, heavy sacks of flour and other goods to local households. The job didn’t last long, though, as a larger chain absorbed Piggly Wiggly and Walt’s services were no longer required.

That’s when, at age 16, Walt started out on his own with Walt’s Service. He’d pick up and deliver for local companies such as Marshall Wells and Alberta Paint, earning anywhere from 10 cents to 25 cents a load. The Douglas had long ago served its purpose, and Walt had acquired a 1918 Harley-Davidson with a National sidecar. Although the Harley was tired when he got it, he took it apart and, with some help from the mechanics at Diamond Motors, machined bushings for the worn crank and rods. Walt was adept at keeping internal combustion engines in tune and running reliably – he needed those motorcycles to keep up his delivery service.

Soon, Walt bought a second rig, this one an Indian 101 Scout with sidecar. He used either the Harley or the Indian to haul all manner of goods, including panes of glass and, at one time, even an upright piano. From this point forward, just about every motorcycle Walt rode was equipped with a sidecar. 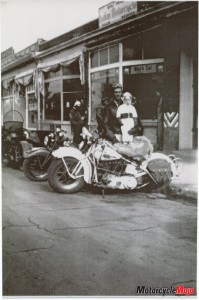 In the late 1920s, Walt needed to upgrade his motorcycles. He visited Clyde Paul, the local Harley-Davidson dealer, and what happened then altered the direction of young Walt’s life.
“I put a $20 deposit on the next [retired] police outfit to come in,” Walt said, “but, we had a little problem with trust.” When he returned with the balance to pick up the Harley-Davidson rig, Walt was told that it had been sold elsewhere. Frustrated, but determined to give Clyde another chance, Walt waited again for another outfit to come into the shop.

This time, the rig hadn’t been sold to someone else. Instead, Clyde told Walt he was keeping the motorcycle with plans to turn it into a hillclimbing competition machine.
For his $20 deposit, Walt told Clyde he’d take the Indian 101 Scout motor on the service bench, knowing the Scout motor had come in for work and the owner couldn’t pay the bill. Clyde was likely happy to have Walt’s money to cover the lost repair cost, but he couldn’t have been too happy with what Walt soon did.
Walt visited the original owner of the Scout motor and, for another $10, picked up the rest of the Indian, including the frame, wheels, forks and tanks. With revenge as his motive, Walt put the Scout back together and turned it into a hillclimber just so he could compete against Clyde.

“I built it so I could go out and kick his ass,” Walt explained. “I built that bike for no other reason.” He entered every climb that Clyde entered, and he beat him every time. Yes, it was quite the grudge. But Walt took away an important lesson from the non-existent Harley-Davidson transaction, and it’s one that he carried with him throughout his career as a businessman.
“If you put a deposit on something, that’s yours,” Walt said, and I clearly remember him thumping the kitchen tabletop for emphasis. “You simply don’t break that trust.”

Although Walt had an Indian hillclimber, he still needed two new machines to keep up the delivery service. He went to the Calgary Indian dealer, who was clearly experiencing some hard times in 1931. Instead of selling Walt two motorcycles, he told him to come up with $100. That sum was the price of his entire stock, with enough parts to build two complete Chiefs and, with the pieces
left over, to help keep other Indians on the road. Walt was only 18, though, and needed a friend who worked for the Canadian Pacific Railway to co-sign a note for him at the bank. A letter was written to Indian headquarters in Springfield, Massachusetts, notifying them of the change in ownership, and Walt moved all the parts into his living room, where they were securely tucked away behind a couch. He then rented a neighbourhood garage, and that’s where he serviced many of the motorcycles owned by Calgary Indian enthusiasts.

His delivery business supported the early days of the motorcycle shop, because it took some time for Walt to establish his name in the motoring industry. As business picked up, he hired his father, Robert, to work as a mechanic, and moved Indian Motorcycle Sales and Service into a small, rented 18- by 30-foot shop. Sales and service were upstairs, with a bedroom and kitchen in the basement for Walt.

Look the Other Way 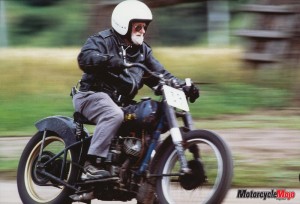 Not content to have established just the Calgary Motorcycle Club, Walt helped form the Ace-Hy Motorcycle Club in 1938. This was a looser-knit group of riders in the Calgary area, and they’d often head west to Cochrane or Banff to exercise their machines or host hillclimb events. An Ace-Hy membership roster circa the late 1930s or early to mid-1940s lists the names of 21 local members.
Walt was also well known for his motorcycle stunts. He told me the police would just shake their heads and look the other way when they saw him steering his motorcycle with his feet while rolling a cigarette. Walt also enjoyed putting on motorcycle performances, including the flaming board wall crash, outhouse crash and jumps between ramps – something like an early Evel Knievel, but not quite as ambitious in height and distance. Several of these entertainments were performed in the infield of the Calgary Stampede and Exhibition rodeo grounds.

He was a fierce adversary in many types of motorcycle competition, including hillclimb and dirt-track racing. Walt competed at events across the western provinces and northwestern states, and, according to the Canadian Motorcycle Hall of Fame, he was the first Alberta competitor to earn an American Motorcycle Association number for both hillclimbing and dirt-track racing. In the late 1940s, Walt also travelled to Daytona Beach in Florida to compete on the beach/road course, and is said to have placed among the top 10 finishers aboard his Indian with the number 38 plate.

In January 1946, Walt constructed a new facility across the street from his rented shop, and even with the demise of Indian in 1953, the store carried on. He sold and serviced some of the famous British brands, including Ariel, AJS, Matchless, Norton, Royal Enfield and Triumph, from this location, but it became most famous as Walt Healy Yamaha, when he took on the Japanese brand in 1963. Walt was the 12th dealer in Canada to take on Yamaha, and the business stayed where it was until 1993, when he moved it from the high-rent and congested downtown location it was in (which wasn’t the case when he had first started the business) to a northeast industrial area.

In the early 1970s, Walt began campaigning the Alberta Apprenticeship Board to make the occupation of “motorcycle mechanic” a recognized licensed trade. He said he worked with four ministers over 16 years in this endeavour, and was finally successful in 1986, when he received the first motorcycle journeyman certificate in Alberta. Walt semi-retired in 1985, and in his later years spent time touring extensively by motorcycle, usually with his companion, Shirley Alex, as a passenger. They covered Australia, Canada, and much of the U.S. and South America.

Walt died in early 2002, and Walt Healy Motorsports was sold in 2003. Unfortunately, even after the new owners’ best attempts, the doors to an iconic Calgary business closed in 2014. It was the end of an era, but Walt’s passion had been absorbed by many thousands of enthusiasts, and his name remains synonymous with motorcycling. He was truly a legend in his own time.