Honda’s 2016 Africa Twin (CRF1000L) is arguably the most anticipated motorcycle of the year. While the name isn’t exactly new, the long-awaited 2016 version is actually a reintroduction of a storied model with an impressive pedigree. To understand why the Africa Twin is such an anticipated motorcycle, you must first understand some of its history. 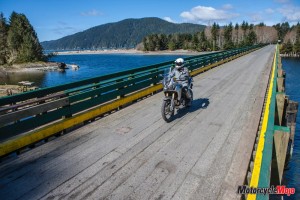 Honda introduced the world to the Africa Twin in 1986, when a race-equipped NXR750 took the crown at the Paris-Dakar rally – and kept it for four consecutive years. To honour its rally wins, in 1988 Honda released the dual-sport XRV750 Africa Twin in Europe. The bike was a strong seller and garnered cult-like status, until it was cut from the lineup in 2002. In other words, this Africa Twin incarnation has some big boots to fill.
Before the release of the current model, Honda had dabbled in the adventure market with the CRF250L and the XR650L dual-sport bikes, and the pseudo-adventure CB500X and NC750X, but without a doubt, the 2016 Africa Twin truly puts Honda into the burgeoning adventure-touring segment. 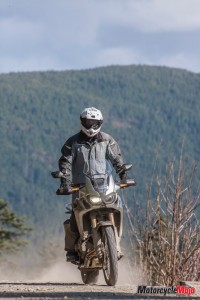 While most of the world’s motorcycle media was able to test the Africa Twin last December, the Canadian scribes had to wait until this spring, when I had the opportunity to ride it in the mountainous area around Victoria. I was excited to finally get some saddle time on the only three Africa Twins currently in North America. You see, the bikes that Honda Canada had for us to ride were actually European models that it had purchased and shipped here to truck around the country for the motorcycle show circuit, and thankfully they survived the clamouring masses unscathed.

Both the manual six-speed transmission and the much-anticipated dual-clutch transmission (DCT) were on hand for testing on a wide variety of terrain that included pavement, gravel, muddy holes and hills, and various trails. While Honda has had DCT in the past, the version on the Africa Twin is different, but more on that later.

The first impression upon mounting the bike is its upright seating position – it fits my 5’ 10” frame perfectly. The adjustable-height seat (850-870 mm) has room to move fore and aft, and thins out at the front where it meets the fuel tank to allow for an easy reach to the ground; it also makes standing up on the bike over rough terrain comfortable without splaying the legs too far apart. In fact, the whole bike is skinny for a full-size adventure bike. The distance from seat to serrated foot peg is a comfortable one so that your knees aren’t bent too tightly, and the foot pegs don’t get in the way of your legs when stopped. Of course, the handgrips and switchgear being mounted on a motocross-style handlebar position them high enough for an easy reach when standing on the pegs.

The LCD displays information vertically, and there’s a lot of it; thankfully, all the important information is there, without having to rotate through various screens. Initially, I had to search the display to find what I was looking for, but riders will get used to where to look for a particular piece of info. 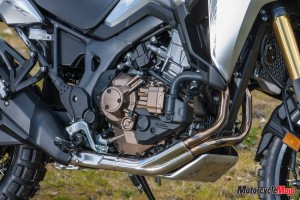 The Africa Twin has a gravel mode, four levels (three settings plus off) of traction control, and a first for a Japanese manufacturer: the ability to switch off ABS, at least on the rear wheel. Being able to turn off ABS on a dirtbike is an important feature, because sometimes, for safety reasons, you just have to lock up the rear wheel. If, for instance, you are going downhill on a loose surface and you have ABS turned on, it’s conceivable that the ABS would keep activating and allow the bike to freewheel down the hill with no hope of stopping in a reasonable distance.
Honda’s answer is simple and ingenious: turn the ABS off to the rear wheel but leave it active to the front. In testing this on wet pavement, the bike stopped quicker when the rear wheel was allowed to lock up but still allowed the front wheel to retain braking traction and steering. The ABS is turned off by a switch on the fairing just to the right of the gauges, and you must be stopped to turn it off. The computer doesn’t hold the ABS setting in memory and therefore resumes full ABS when the ignition switch is turned on.

Traction control is easily accessible by the left forefinger toggle on the switchgear, and can be set to the various levels of intervention or turned off completely while the bike is in motion.

A Shift in Tranny Technology

Traction control and ABS is all pretty standard stuff these days, but the bike’s six-speed DCT isn’t, and I believe Honda has nailed the DCT in the Africa Twin. It’s a different iteration from previous Honda DCTs, with a lot more functionality. It has the regular D (for drive) and S (for sport) modes, but also has three levels of sport for varying degrees of aggressiveness in throttle and clutch action. Changing between D and S modes can be done on the fly. When stopped, you can also shift the tranny to neutral with the same button. In addition to the D and S modes, the rider can choose to have the DCT in manual mode, thereby taking control of up- and downshifts by using the left forefinger or thumb paddle to shift. One very nice feature of the DCT is that even if you are in one of the automatic modes, you can override the transmission to shift up or down manually – if you “are coming into a corner too hot, for instance, and need to downshift – though the transmission will continue to shift automatically once you stop shifting with the paddles.

Whether heavy on the throttle or gently getting up to speed, the DCT shifts smoothly and is virtually seamless. While one gear is ready to be released by one clutch pack, the next gear is being engaged by the second clutch pack – just keep the throttle on and the bike will do the rest. (For a more detailed explanation of how DCT works, see Mojo Garage in the May issue.) This not only keeps your left hand on the grip and consistent traction to the road, it also keeps your mind on the job of riding instead of thinking about clutching, shifting, and getting off and on the throttle.

The Africa Twin’s DCT also has a “G” (for gravel) button that offers more aggressive clutch control for quick manoeuvres, such as purposely breaking rear wheel traction or lightening the front end when going over obstacles.

Further functionality of the Africa Twin’s DCT includes incline detection, which determines the grade of an up or down incline and adjusts shifting accordingly.

After using a clutch for the past four decades, my muscle memory needed to be retrained, and it didn’t happen right away. Once underway, I still reached for the clutch occasionally, but where I initially had a problem was taking off; many years of lightly blipping the throttle while gently letting out the clutch lever was the biggest hurdle to overcome, because as I’d gently rev the engine, the bike would lunge forward. I did get used to it eventually.

I was most curious to see how the DCT would handle slow-speed, technical manoeuvres when traditionally feathering the clutch would be the proper way to control rear-wheel power delivery on a manual transmission. As much as I really liked the DCT, I felt that I didn’t have the same walking-speed control that I have with a manual transmission. I was able to perform slow-speed manoeuvres with the DCT, but they didn’t seem as smooth. It’s possible that with more time and practice this could be overcome and perfected.

There were occasions in the fully automatic mode when I had accelerated to pass a car and the DCT didn’t upshift afterwards, bringing the rpm back down as I expected it to after backing off the throttle. Instead, it seemed to hang onto the lower passing gear for a bit of extra time. It did upshift on its own eventually, but if you find this lag annoying, a quick hit of the upshift paddle would solve the issue.

And we can’t forget about the six-speed manual transmission. Shifting is positive and butter smooth with just a light snick into gears. According to Honda literature, the clutch action has been reduced by 20 percent thanks to the implementation of an assist-slipper clutch, and I must say, it is possibly the lightest clutch I have ever felt on a litre-size engine.

The Heart of the Beast

The inline twin-cylinder engine uses a 270-degree crank for a V-twin-type engine pulse and traction behaviour, and three balancer weights to quell any vibration that might come through. The handlebar is rubber insulated to intercept any off-road shock, and the end result is a total lack of vibration through the handgrips. Additionally, I didn’t feel any vibration through the seat or the foot pegs anywhere in the rev range. This bike is velvet smooth.
The responsive and compact (thanks in part to a dry oil sump) 998 cc engine has a linear power delivery that, according to Euro specs, dishes out 94 hp and 72.3 ft-lb of torque to get the bike up to speed quickly, particularly with the DCT in sport mode.

The engine resides in a tight-fitting and rigid semi-double cradle, oval tube frame made from high tensile strength steel. Even with an overall ground clearance of 250 mm, the bike feels light with a low centre of gravity. Weighing in at 232 kg wet for the manual transmission and 242 kg for the DCT, Honda engineers have done a good job of keeping the weight low and centralized. Further aiding this feeling of compactness are design choices like nestling the battery in the cavity behind the cylinders and above the transmission, and mounting the ABS components low in the frame.

The Africa Twin rolls on spoked 21-inch front and 18-inch rear wheels, shod with dual-purpose 90/90-21 and 150/70-18 tires. These sizes offer a wide array of tire styles for the off-road enthusiast. Braking is accomplished with a pair of 310 mm wave rotors up front being squeezed by radial four-piston Nissin calipers, while a single two-piston caliper out back clamps down on a 256 mm wave rotor. The responsive brakes offer a good feel both on- and off-road, and the Continental TKC80 tires that were on our test bikes provided good traction in the dirt and mud.

The long-travel Showa inverted forks are adjustable for preload, compression and rebound, while the Showa rear shock is adjustable for rebound and preload via an easy-to-access knob on the left side of the bike. Whether off-road or on the highway, the bike was agile, and the suspension was plush for a comfortable ride and never bottomed out, even when hitting deep holes and ruts on logging roads and trails.

All in all, the new Africa Twin should give any of its competition a run for their money, literally, being priced several thousand dollars less than the BMW R1200GS or the Triumph Tiger Explorer 1200. The manual transmission is available in Matte Black Metallic for $13,999, or CRF Rally colours of red, white and black for $14,299; the DCT model only comes in Silver Metallic and retails for $14,999.

I wasn’t able to spend many continuous hours in the saddle, but I think the Africa Twin should be comfortable for all-day adventures. It handled well in all off-road and highway scenarios, and I was particularly impressed with its new DCT technology. “