Ducati is getting serious about adventure touring. The Multistrada 1200, introduced in 2010, was the company’s first real adventure bike. It offered much more performance than the DS1000 Multistrada it replaced, but with 17-inch wheels, it favoured road-going adventures, catering more to the sport rider rather than the true backcountry explorer. That changes this year with the introduction of the 2016 Multistrada Enduro. Ducati says the Multistrada Enduro is aimed at “globetrotting off-roaders” and has made many changes to the bike to ensure it can handle the terrain when the pavement ends. Ducati invited Motorcycle Mojo to ride this
refocused adventure bike in Sardinia, Italy, where we discovered that it truly is ready for exploring. 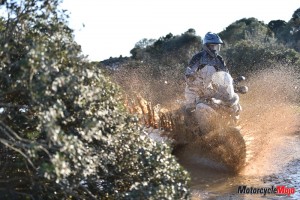 According to Ducati, there are 266 new parts on the Enduro, with the biggest changes having been made to the chassis. Steering geometry is slightly more relaxed than on the standard Multistrada, with one degree more rake (at 25 degrees), more offset in the triple clamps, and 4 mm more trail. Other noticeable changes include tubeless spoked wheels, with a 19-incher at the front replacing the 17-incher on the standard bike. It also uses a dual-sided swingarm, which is 65 mm longer, while a narrower 170 mm rear tire replaces the 190 on the Multi. The suspension has also gained 30 mm of travel, now stroking a full 200 mm at both ends. First gear is also lower, to facilitate very low speeds off-road.
The Enduro offers a longer fuel range than the standard Multistrada, as engineers have added 10 litres of fuel capacity for a total of 30 litres, which can take the bike more than 500 km between fill-ups. The side panels are made of aluminum to better protect the plastic fuel tank in case of a fall. Other off-road equipment includes a large aluminum skid plate, large steel foot pegs, a folding shifter and a brake pedal with an adjustable toe pad to accommodate stand-up riding. 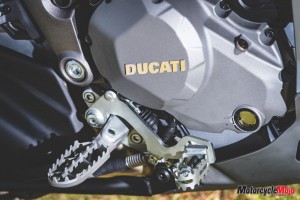 What hasn’t changed is the 1,198 cc Testastretta DVT (Desmodromic Variable Timing) engine with variable valve timing. The 90-degree L-twin claims 158 hp and 100 ft-lb of peak torque, which is way more than enough power to handle any kind of long-distance excursions you might be planning. The engine mapping, however, has been revised to produce more low-end torque, while throttle mapping has been softened for better control when riding off-pavement. Dealers can reprogram older Multistradas with these new settings. If you’re intimidated by the prospect of hitting the dirt accompanied by 158 wild horses, you can take comfort in the fact that the 2016 Multistrada has four ride modes –Sport, Touring, Urban and Enduro – with the last two modes limiting engine output to 100 hp.
In addition to the ride modes, other electronic aids include eight levels of traction control, wheelie control, cornering ABS with an off-road setting, and a new hill-holding feature that holds the bike stationary when on an incline to ease taking off, a very useful function when the bike is loaded, especially when considering the bike’s rather tall seat height.

Temperatures for our morning departure were in the low teens, prompting me to turn on the optional heated grips and to raise the manually adjustable windscreen (60 mm range). Because of the Enduro’s new-found adventure ability, our hosts from Ducati planned a 140 km loop along winding paved roads in the morning and a challenging 75 km unpaved loop in the afternoon that wound its way through the surrounding mountains and forests. They also installed knobby Pirelli Scorpion Rally tires on the bikes that would be riding the off-road portion of the route, in place of the street-oriented OEM Pirelli Trail II tires.

Ergonomics
Revised ergonomics include a handlebar position that is 50 mm taller than before to facilitate riding while standing up. Some finer touches include mirrors that have angled stalks designed to clear your forearms when you’re standing. The riding position is very relaxed and upright, but the taller suspension has raised the seat height to 870 mm, which kept me on my toes, and I’m six feet tall (options include an even taller 890 mm seat and a lower
850 mm seat). 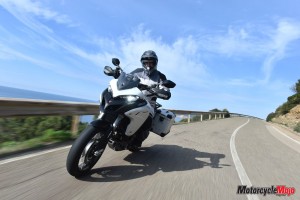 As on the standard Multistrada, the engine has a raspy rumble that is surprisingly robust for an EPA-approved motorcycle. Since the first part of the ride was on smoothly paved roads, I selected Touring mode, via the high-resolution TFT instrument screen. This mode offers full power but smoother throttle delivery than Sport mode. The introduction of the Testastretta DVT engine has really smoothed the Multistrada’s low-speed rideability, almost completely eliminating the power-pulse jerkiness of the previous-generation bike with the non-DVT engine. This made the bike quite easy to manage in town, though for an even smoother throttle, Urban mode offers even less aggressive throttle response while limiting peak output.

The suspension is factory preset within each ride mode, but it can also be custom-tailored firmer or softer than the factory setting, though I chose to leave it on the default medium-soft setting. This proved to be a plush and compliant setting, but it was a bit too soft when the road got twistier and the pace got faster. Here, a quick change to Sport mode gave the bike a livelier throttle response while firming up the suspension for more aggressive cornering.

Riding Impression
On the road, the taller handlebar does offer a slightly more comfortable riding position than on the standard bike, but there is somewhat of a trade-off in handling, as the bike’s taller suspension has raised the centre of gravity; a quick romp through some twisties revealed that quick turning transitions are a bit more laborious.

The winding road led to our first photo stop, and as we lined up for the upcoming photo passes, a small car pulled over and a stout gentleman got out, smiling and speaking Italian. Not understanding what he was saying – which he complemented with animated hand gestures – we initially thought he might have been upset at our roadside gathering. However, we soon discovered he was a local farmer, and in the trunk of his car he had a selection of homemade cheese and sausage that he was bringing to the local market. Ever the enterprising businessman, he saw an opportunity to make a sale right there and started handing out samples of his delicious wares. He sold more than 100 euros’ worth of his goods before motoring off on his way.

From Pavement to Off-Road

After our roadside snack, we headed back to the hotel for lunch and to swap bikes for the off-road portion of the ride. Switching bikes immediately revealed that the Pirelli Scorpion Rally tires are really meant for riders intending to venture off-road. Although grip was reassuring and abundant on pavement, the knobs slowed steering response and introduced a slight vagueness in steering feedback. Of course, as soon as we hit the dirt, this proved to be a very fair trade-off because we almost immediately began a steep, rocky climb along a switchback-riddled back road, and the added traction of the chunky tread made the climb easy.

Probably the most noticeable change that puts the Multistrada Enduro among serious adventure bikes with an off-road penchant is in the suspension department. Selecting Enduro mode softens throttle response and limits engine output, while adjusting the suspension to the medium setting. This is the only mode in which I selected a different suspension setting from the default, opting for an even softer setting.

The Enduro’s new electrically adjustable Skyhook suspension is standard, and it’s what gives the bike some serious off-road capability. Rocks from the size of golf balls to softballs go beneath the wheels almost completely unnoticed, while larger rocks and bigger bumps work the suspension through its stroke, which returns fluid compliance without bottoming. Ducati seems to have outdone BMW in suspension compliance, as the Enduro’s suspension is remarkably efficient over rough pavement, returning a more compliant ride than the R1200GS with the Dynamic ESA suspension, which itself is quite effective.

Our romp in the dirt, which included a variety of surfaces, from loose rock and gravel to sand, hard-packed dirt and some mud, did reveal one small weakness. The hand guards are brittle and therefore very fragile. Two riders broke them after experiencing relatively light tip-overs. Aftermarket hand guards are not an immediate solution, because the Ducati hand guards incorporate the bike’s front turn signals, which likely means replacement cost will be high.

Another slight oversight is that the Multistrada Enduro doesn’t come with an electric shift assist that permits clutchless gear changes, not even as an option. Although this feature might seem like overkill to some, it has proven very handy on the BMW R1200GS, especially when riding off-road in tighter, rougher trails that require a rider to stand up. Shifting gears both up and down without operating the clutch alleviates the riding load a bit while also allowing quick gear changes, sometimes necessary to maintain momentum in particularly tight situations or on steep uphill stretches.

At $22,395, the Multistrada Enduro is in the upper scale of the adventure-bike price range, but it comes with almost all the bells and whistles, including Bluetooth connectivity and LED headlights with cornering lights. However, if you were to equip an R1200GS, which starts at just $19,800, the same way, including the electrically adjustable suspension, cruise control (standard on the Ducati), luggage mounts and sturdier spoked wheels, it would tally up to $22,265, right in the Ducati’s price range, though the BMW does come with standard heated grips, which are a $360 accessory on the Duc.

Real adventure riders take their off-roading seriously, and they require a machine with the proper equipment and off-road capability to allow forays deep into the woods. The BMW GS has been extremely successful in this arena, with serious off-road prowess in a very versatile package. Ducati now offers an adversary that is a very serious entry in the adventure-touring category, and is as capable off-road. It’s unlikely the Enduro, or any other adventure bike, will ever catch up to the GS – the granddaddy of all adventure bikes – in sales, but it certainly won’t have any problem keeping up on the trails.