From the Hudson River, the dense forests covering the ancient Adirondack and Catskill Mountains appear as pristine wilderness. Get up close on the land and you’ll discover a network of spidery mountain roads, weaving together historic villages, farmland, forests and rivers, without encroaching on the valley’s best attribute – a spirit that touches your soul. It’s perfect motorcycle country.

Long a strategic gateway to the Atlantic Ocean, the Hudson River Valley has served at various times as a primary transportation route, a host for industrialization and the base for military posts, including West Point. In spite of all that civilization has demanded of it, the valley has retained its incredible natural beauty and unique energy.
First discovered by Europeans in the early 1600s, the Hudson River’s close proximity to New York City quickly garnered it military, cultural and economic importance. In the mid-1800s, summer estates for families such as the Morgans, Vanderbilts and Roosevelts began appearing. The fresh air and evergreens drew artists, outdoor enthusiasts and city folk seeking to escape or recover from dangerous diseases. Long a favourite motorcycle destination, the hills are also home to a plethora of mainstream and alternative venues, from music festivals to Tibetan Buddhist and other retreat centres, popular with those seeking spiritual renewal. 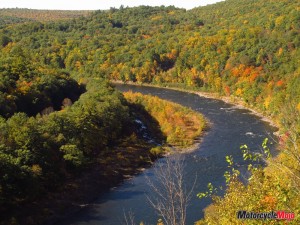 Two weeks of energy medicine studies at the renowned Omega Institute, tucked in the hills around Rhinebeck, New York, drew me to the area. Although time constraints meant I had to arrive via the express route, even it was scenic, carrying me across the Adirondacks and Catskills. The courses were great, but after five days, I was eager to make the most of the weekend and lose myself and my Tiger in those hills.

It didn’t take long. Within 10 minutes of departing, I managed to get myself turned around, ending up somewhere other than where I thought I was headed. And that was with a GPS. Meandering mountain roads bounded by forests, streams, old stone fences and homesteads are captivating, and the riding is wonderful no matter where the roads take you. Mind you, I wasn’t as lost as Henry Hudson, who, in 1609, sailed almost 250 km upstream looking for a shortcut to China before realizing the route wouldn’t get him to his destination.
With minor exceptions on short sections of very back roads, road surfaces are smooth, nicely graded and well maintained. However, expect that they can get narrow, with shoulders a rarity.

I was there in mid-October during Canadian Thanksgiving. Mornings were a little chilly, but the radiant sunshine; brilliant blue, cloudless sky; and dazzling autumn colours were irresistible.

My westerly direction for the first day took me across the Catskills to the Upper Delaware Scenic Byway. Given the Hudson is a very wide river and bridges aren’t always where you want them, you need to plan crossings accordingly. Omega Institute is on the east side of the Hudson and the most convenient bridge was north of me at Kingston. There’s a toll on this 2.4 km span, but only for eastbound traffic.

The Mecca of Music and Arts 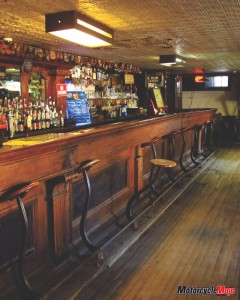 Long stretches of open, gently curving roads connecting small towns typified my ride south on Route 209 and then west on Route 17. Completely immersed in the magic of the day, I let my bike lead. Shortly after bearing south onto Route 17B, I arrived at the town of Bethel, and more importantly, nearby Bethel Woods, site of the original Woodstock festival in 1969. Now a world-class performing arts centre, the concert-goers of yesteryear could not have imagined the cultural complex that has grown out of Max Yasgur’s farm, attracting top names across a diverse spectrum of genres. The museum honours the Woodstock festival and the cultural revolution of the ’60s, showcasing memorabilia like iconic peace signs, a psychedelically painted bus and a similarly clad VW Beetle.

Upon reaching the Delaware River, I headed south on State Road 97, also known as the Upper Delaware Scenic Byway. As it carves through wooded countryside along the Delaware River, here also the New York–Pennsylvania state line, it’s easy to see why it’s in the running for USA Today’s Top 10 Scenic Drives in the USA. Even on a beautiful autumn Saturday, traffic was sparse and motorcycles well represented.

There are no shoulders and lots of curves, so use caution. Occasional pullouts allow you to stop for photos or to just spend a quiet moment. I pulled into one to get off the bike for a few minutes before making a U-turn to visit Roebling’s Delaware Aqueduct, also known as the Roebling Bridge, the oldest existing wire cable suspension bridge in the United States.

The Road to Recovery 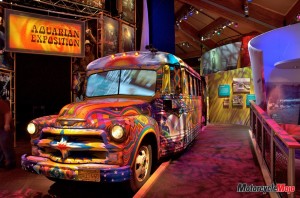 Still recovering confidence after a significant crash a year earlier, I faltered and ended up in the ditch on the other side of the road, attributing my momentary target fixation on a lapse in focus. The pavement was narrow, but there was no reason other than nerves not to make the turn. To my credit, the bike and I stayed upright, but as we were perpendicular to an incline, I couldn’t get off without tipping over. Riders John and Debbie joined others who stopped to help, and before long, it was like Old Home Week. John rode my bike back up the embankment and across the road to where I’d started the ill-fated turn. After pulling the greenery out of the Tiger’s underbelly, we were off again, both unscathed. A captivating conversation with the Good Samaritans was how I heard about Rohman’s Inn, just across the Pennsylvania state line in the tiny town of Shohola. With the inn well off the main drag, I’d have never found it were it not for John – a long-time resident of New York City – leading me there. Rohman’s Inn was a favourite weekend destination when he started riding. It hasn’t changed much since it was built in 1849, except instead of horses tied up to the hitching post, Harleys and pickup trucks line up outside. Legend has it that movie stars and celebrities like Babe Ruth would bring their girlfriends there. Greta Garbo, Gloria Swanson and Charles Lindbergh were also patrons.

The worn wooden floor and carved wooden bar hold their share of stories, but what’s most distinctive are the barstools. In the 1930s, when the popular spot had standing room only, it was illegal to stand at the bar, so the clever bartender came up with an ingenious solution: he installed trolley conductor seats that snap up and away, but were perfectly functional stools when the authorities dropped by.

Back on the road just north of Sparrowbush, a snaky section of road known as the Hawk’s Nest awaited. Named for the birds of prey that nest in the area, the road rises high above the river, undulating and thrashing as it clings to the cliff face. A number of overlooks invite you to stop and take in the view. It was already mid-afternoon and I wanted to get to the Motorcyclepedia Museum in Newburg, N.Y., with enough time to wander through the displays. It meant taking the Interstate, which was still scenic, and it was worth it. Even so, a whole afternoon is not enough time to view the over 450 motorcycles built from 1897 onward, crowded into 7,900 square metres of exhibit space. Galleries showcase every model of the original Indian line up (the 1901 is a replica), a police bike from JFK’s motorcade, a 1917 Thor Twin owned by Steve McQueen and autographed by his wife, and two Walls of Death. Getting back to home base meant crossing the river again, this time on the Newburgh–Beacon Bridge. Since I was eastbound, there was a toll of $1.50. Exiting shortly after the bridge, the Taconic State Parkway would take me north and back to Omega. This scenic four-lane divided highway offers a relaxing ride along the Taconic Mountains, passing under rustic overpasses and through minimally developed areas. The speed limit here is only 55 mph and it’s strictly enforced. Beer and Brats The weather gods favoured me again the next day with a repeat of the fair temperatures, sunshine and blue skies. I’d planned a less aggressive itinerary, hoping for mostly casual riding in the Catskills.

My primary destination was Hunter Mountain, where a lively Oktoberfest, celebrated every weekend in October, was in full swing. With many city dwellers out to enjoy the fall foliage and the outdoors, the back roads were crowded with Sunday drivers. In popular areas, pedestrians accessing trailheads compete for space on the twisty roads. Even where a narrow path is provided for their use and safety, it’s easier to walk on the road, so beware. Outside of a few popular areas, though, the riding is fabulous and for the most part unobstructed. Aside from the spectacular views and festivals throughout the year, Hunter Mountain, a popular four-season resort, is the abode of Van Winkle’s Restaurant.

As the setting for Washington Irving’s Legend of Sleepy Hollow, the area boasts numerous homages to the character Rip Van Winkle, who wandered away after a spat with his wife, got into some moonshine and slept for more than 20 years. Large murals line the walls, telling the tale of the man who woke up to find his wife has died, his son is a grown man and he slept through the American Revolution. Re-energized After a delectable lunch in fairy-tale surroundings, there was nothing to do for the rest of the afternoon but enjoy unadulterated riding through the twists and turns of the Catskills. The mountains were at their best, with sunshine showcasing brilliant autumn foliage and the sweet scent of dry leaves permeating the picture-perfect day. When I got back to Omega, others would be arriving for another week of courses, but none would be as refreshed and energized as I.