With the wind soughing through the fir trees, Pat Doherty stood on a hill on a piece of land near Shubenacadie, N.S., and knew he’d found something very special. It was during a timber surveying expedition late in 1972 when Doherty was visiting Moxom Farm. Owned by Jim Wilber of the Elmsdale Lumber Company, some of the acreage had been cleared for cash crops, while the rest of it was covered in forest. At 377 acres in size, the property, Doherty realized, had great potential. 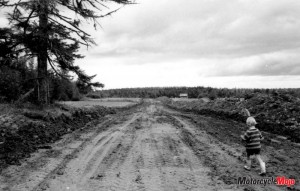 “The whole motor racing community was looking for a place to put a track,” says Dave Munroe of Waverley, N.S. “And from the viewpoint where Doherty stood, you could just visualize the layout of the track. There were hills, gullies and a stream – it was beautiful.”

The reason the eastern Canadian racing community was hunting for a location was simple. By the late 1960s, the airfields where temporary motor courses could be laid out on the flat runways were disappearing, and that’s where most of the motorsport action had been taking place. Anyone wanting to race at that time had to drive long distances to Quebec or New England to access a track, and racers wanted something local that would feature some elevation changes, together with fast straights and a variety of turns, from long sweepers to tight corners.
Atlantic region car clubs had been racing on the tarmac at the military-owned Debert, N.S., airport. In 1967, the newly formed Atlantic Motorcycle Competition Riders Association (AMCRA) asked to share the venue. Both cars and motorcycles used the space, but it wasn’t long before the military notified the racers of an impending closure.
“The car racers had been drawing large crowds and had managed to save $7,000,” Munroe explains. “And the thought was, that money could be used to help pay for a piece of land.”

A Deal Is Made
That wasn’t enough money, though, to secure the Moxom Farm location, because Wilber wanted $30,000. Before entering negotiations, and to become more formally organized, the car racing groups and AMCRA created a company called Atlantic Motorsport Park. Munroe became vice-president, and he was tasked with negotiating with Wilber for the land.
“Jim asked for 10 years of timber cutting rights for which he’d pay $10,000,” Munroe recalls. That made $17,000 the nascent track company had to put toward the land. Elmsdale Lumber loaned the group another $12,000, and the group sold shares to make up the balance.

Land secured, thus begins the story of Atlantic Motorsport Park, or AMP, as it’s commonly known. It’s important to note that in the early 1970s, there were literally dozens of people who gave much of their time, money, energy, enthusiasm and back-breaking labour to make the track a reality. Many of these folks could be considered Nova Scotia legends in their own right. However, rather than the individuals, it’s upon the AMP facility itself that we’re bestowing the status of legend.

For the purpose of this story, I tracked down just two of the individuals who were there at the beginning – Munroe and his good friend John Doherty, Pat’s brother. There were of course others, and without being unfair to those who are nameless in this piece, we’re learning about the facility solely from the perspective of Munroe and John.
Munroe picks up the story again. “Money was a big problem. We had the land, but no more dollars. So, we issued shares, and some of the wealthier car guys pitched in $5,000 each. Some of the track corners bear the names of these donors – turn 10 is Bob MacDonald’s Bend, and turn two is Ryan’s Hairpin, named after Robert Stapells’ son. Other donors who didn’t want corners named after them include Dave Fram, Ronnie Locke and Don Hogan.” 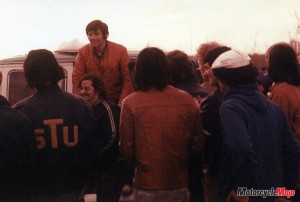 Now the group needed plans for the track. Sketches were submitted from the racing community, while architecture student and Atlantic Sports Car Club member Robert Guthrie thought a track design would make an interesting thesis to help earn his degree. Interestingly, while Guthrie’s working drawings and 3D models involved the most detail, almost all the submitted track designs were similar.

“[Guthrie] did a great job in just three or four months,” Munroe says, adding, “and then there was nothing happening. Things went quiet for a while.”
Enter Jack Canfield. An enthusiastic motorcycle racer, Canfield had come off his machine during an event at an abandoned airfield at Pennfield, N.B. It was a Saturday morning, and while Canfield wasn’t seriously injured, his racing was finished for the weekend. Munroe was also at the event, and describes their exchange: “Jack came up to me and said, ‘What’s going on with the track, Munroe?’” I told him we were waiting to get the track laid out, and he said, ‘Well, come on, let’s go build a racetrack.’”

Breaking Ground
The two were ideally suited for this task, given Munroe was a licensed land surveyor and Canfield was involved with heavy equipment and had access to not only survey instruments, but also earth-moving gear.
“We went back to Halifax on that Saturday afternoon, picked up the gear and wooden stakes, and by Sunday afternoon we had the centre line of the track laid out,” Munroe says. “On Monday morning, Jack had a guy on a D9 dozer moving earth. It was amazing.”

It was soon after that that Munroe became president of AMP. He says the project cleared environmental studies and that hundreds of people showed up – some with hoes, picks and shovels in hand – to help build the track. The Nova Scotia Treasury Board contributed some funding, and a 4.25-metre Armco metal pipe was purchased to construct a pedestrian and car tunnel for spectator access to the infield. Once some drainage issues were resolved and the 2.5 km-long track, with its 11 corners, was carved out of the land, it was finally time to lay the foundation for pavement. All AMP could afford was pit-run gravel for a base, and it ranged in size from small pebbles to large boulders.

Many hands helped move the bigger rocks out of the track bed, and over the pit run went a layer of Class A gravel – 2 cm stones and smaller, right down to grains of sand. When it came time for asphalt, Canfield was the go-to guy; he knew of a paving company owned and operated by a fellow named Tiny Potter.
Although Potter told the AMP crew they should ideally have 7.5 to 10 cm of pavement, it was too expensive. What they could afford was 5 cm, and in 1974, that’s how much asphalt was initially laid down.
Always Chasing the Money 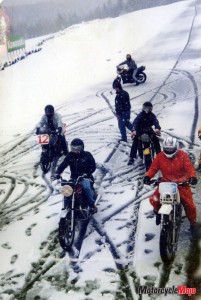 “We’d finished laying asphalt on a Friday night when the Player’s Maritime Formula Atlantic race ran on the Saturday and Sunday,” Munroe recalls. “And those cars, with their big slick tires, just about ruined the pavement. We needed more money to make repairs, and it seems for the first seven or eight years, the track always needed more money.”
Munroe gave up his role as president in the mid-1970s, and after a succession of volunteer presidents, the Doherty brothers held the positions of president and treasurer. John, in the latter role, says AMP sold three years’ worth of advertising to Honda in the early 1980s, and that kind of money helped put the track on an even keel.
“A lot of people did everything they could to ensure AMP stayed in business,” John says. For example, there’s the story of how the track got most of its concrete barriers to keep competitors and spectators safe. In the early 1980s, after the Moosehead Grand Prix had run in the streets of Halifax, there were kilometres of barrier sitting in storage. Derek Oland, president of Moosehead Breweries, Nova Scotia, received a written proposal from John and AMP president at the time Eugene Pettipas – essentially, they were asking Moosehead to give AMP the barriers in return for free advertising. It met with success.

“But, we were given only a short time to remove all of the concrete barriers from the storage lot,” John recalls. “Gary McKinnon had trucks and trailers available, and Canfield had a loader. We were running 24 hours a day to move it, but that’s where all the barriers came from.”
Several race series have come and gone over the years, but 2016 is the track’s 42nd anniversary and the venue continues to run strong. Some big-name racers, including automobile competitors Gilles Villeneuve, Keke Rosberg, Bobby Rahal and Jochen Mass, have frequented the track. Names in the motorcycle camp include Steve Baker, John Ramsay and Don Munroe (Dave’s son). 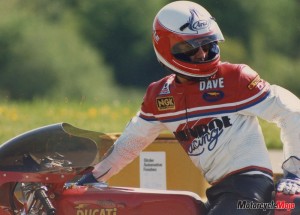 Both Munroe and John say the track really seemed to come into its own when the British Cycle Supply company, based in Wolfville, N.S., began sponsoring the Atlantic Vintage TT race weekends. Starting in 1993, vintage motorcycle race events were held at AMP, and in addition to the competition, there was live music, lobster and pig roasts, swap meets and show ’n’ shines.
“The racing was fierce and there was no [prize] money involved,” John says. “When the TTs first started out, there were no showers at the track and there wasn’t a canteen, but those facilities were eventually added.”

John also notes that “There were more Americans racing at the Atlantic TTs than there were Canadians. It was a really good deal for them, because our dollar was around 63 cents back then!” After 12 successful events, the last Atlantic Vintage TT was held in 2005.
From humble beginnings, AMP now looks very groomed and well sorted, Munroe and John say. There are no more barrels filled with rock and sand, the paddock area has been expanded and paved, and plenty of work has been done in the past year to repair some of the asphalt on the track itself.
“What makes AMP unique,” John says, “is that it was created as – and remains to this day – a racetrack owned and operated as a not-for-profit entity run by the membership of the motor-
cycle and autosports clubs that share the responsibility for its maintenance and development.”
And it’s that dedication from literally hundreds of local bike and car racing enthusiasts and volunteers that ensures the continued success of Atlantic Motorsport Park…