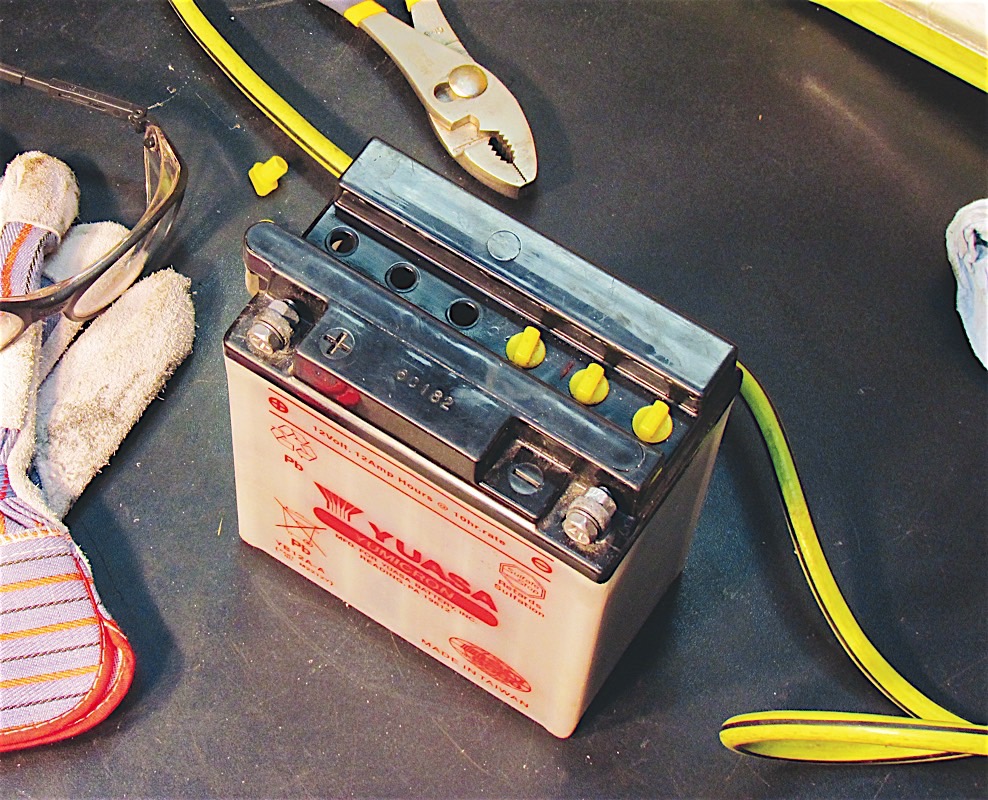 Even though it’s midway in the season, it might be time to put a new battery in your bike. But what type of battery should you buy? Life was simpler a couple of decades ago, when only conventional batteries were available. Several years ago, absorbed glass mat (AGM) batteries became available, and more recently, lithium iron phosphate batteries have hit the market. 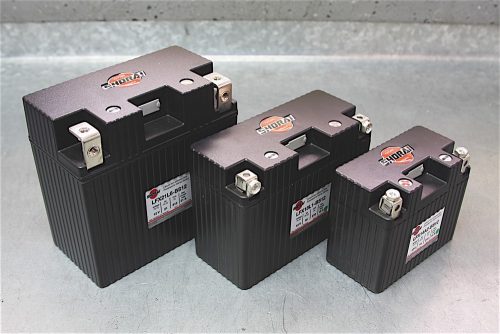 Conventional batteries are also known as lead-acid, or flooded electrolyte, batteries. These batteries contain several series of positive and negative plates of different materials (including lead); each series of plates is contained within a sealed cell. The plates are immersed in electrolyte, which is a mixture of sulphuric acid and water. It is the chemical reaction between the electrolyte and the plates that produces electricity, at a rate of roughly two volts per cell, which is why there are six cells (and six filler caps) on 12-volt batteries. Note that 12 volts is a nominal value, and batteries are actually designed to work ideally between 13.5 and 14.5 volts, with a static voltage of at least 13.2 volts. That means that if your voltmeter reads just 12 volts, it’s time to put your battery on a charger.

Conventional batteries come in two forms: maintenance-type and maintenance-free. The former are the least expensive but require the most service. They are easily identifiable by their filler caps, which are there so you can top up the electrolyte if it gets too low. The reason electrolyte levels drop in a battery is that when the battery is “excited,” either while charging or while riding, the electrolyte heats up, and the water within it evaporates out the vent.

The vent is necessary for the battery to breathe as it works; otherwise, pressure would build up and it would explode. This is why it is critical that the vent hose, usually a clear rubber tube, be unobstructed and free of any kinks. You’ll also note that when new, those clear vent hoses always have nearly invisible slots cut into each end. These slots act as safety vents if the hose becomes kinked or otherwise blocked, which is why it is important to always install the hose with these slots right by the battery’s vent nipple, especially if you cut the vent to length.

Also note that it is only the water that evaporates, not the sulphuric acid, which is why you should only add water to a battery to top up the electrolyte level. The water should be distilled water and added before charging.

Maintenance-free batteries are still lead-acid-type batteries, but the main difference is that their vent holes are tiny. This greatly reduces the likelihood of evaporation, so the electrolyte level remains intact; they cost slightly more than maintenance-type ones. Overall, however, conventional batteries are the least expensive to manufacture and are therefore the most affordable. 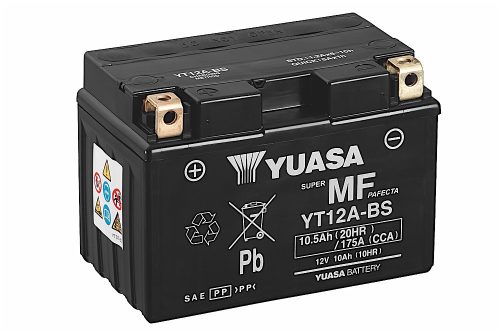 AGM batteries work on the same principles as do conventional batteries, but instead of using free-flowing liquid electrolyte, they use an electrolyte-soaked fine fibreglass mat between the plates. This makes AGM batteries completely spill-proof. Comparatively speaking, AGM batteries are also lighter than conventional ones, can charge up to five times quicker and are maintenance-free. And because they also discharge at a much slower rate, they can handle longer periods of inactivity.

Lithium iron phosphate (or LFP) batteries are the newest batteries available – and they are the most expensive. These are lithium-ion-based batteries designed for high-power applications. They have a very constant discharge voltage, so unlike conventional and AGM batteries, whose voltage drops as they discharge, LFP batteries will maintain their voltage until they are depleted.

The biggest advantage of this type of battery is that it weighs about one-fifth as much as a conventional battery. They are, however, much smaller and might take some creative fitting; some LFP battery makers include foam pads to shim the battery box. Also, they don’t do well in cold weather and need to be woken up if the temperature drops. This means that the initial crank might be very slow, but after a short pause, the engine will crank at or near its regular speed. In addition to being the most expensive, LFP batteries require specialized chargers or very careful charging with conventional chargers, or risk being destroyed by overheating.

All batteries discharge with time, though the type of battery will dictate how quickly it discharges. Conventional batteries are the quickest to lose their charge, followed by AGM batteries and finally LFP batteries. Regardless of the type of battery, if it is low, it will require a proper charge from a battery charger. Motorcycle charging systems are designed to maintain a charge, so if a battery is discharged, riding won’t replenish the charge. The ideal charge rate for a conventional battery, for example, is one-tenth of the battery’s amp-hour rating, so if a battery is rated at 20 amp-hours, it should be charged at a rate of 2 amps for 10 hours.