What you don’t see matters most

If you’re in the market for a new, American-made cruiser and decide to pay a quick visit to Harley-Davidson Canada’s website, you’ll come face to face with 41 different 2016 models. Add to that an infinite number of accessory combinations, both factory and aftermarket, and you’ll soon see the variety is both incredible and just plain disorienting. But fear not, because I can simplify your browsing strategy and eliminate the many distractions that await your attempts to find the bike amidst the haystack.

Once you locate the web page for the Low Rider S at harley-davidson.ca, you’ll notice a complete lack of paint or wheel options, and that accessory shelf is about as bare as Old Mother Hubbard’s – see, we’re already distilling the process. 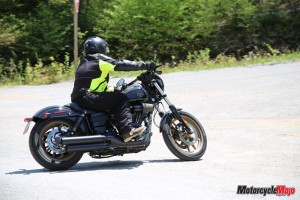 What you’re left with is one fairly unassuming motorcycle. Its black-on-black paint and Magnum Gold wheels give it a Smokey and the Bandit quality. Sadly, without the flaming chicken on the hood and a mustachioed cowboy in the saddle, it also blends into the background amidst just about any company sporting chrome or custom paint. Seeing the bike in person for the first time outside Harley-Davidson Canada’s head office only strengthened that impression, as parked right next to it was the firm’s new CVO Pro Street Breakout looking long and low, and wearing an eye-catching colour scheme. In comparison, the Dyna-derived Low Rider S had more of a chopper look to it with the 19-inch front wheel and steep rake; your eyes drawn to the new high-mounted bars, then the tank and back to the abbreviated rear fender. 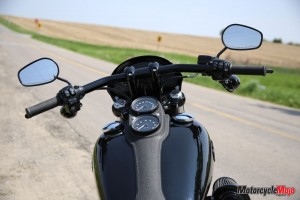 The Low Rider S is definitely a bare-bones, ride-hard kinda bike – common traits for the Dyna family over the years – but this one comes carrying what amounts to a concealed weapon in the form of a Screamin’ Eagle Twin Cam 110 (1,803 cc) engine. This monster belts out 115 ft-lb of torque at just 3,500 rpm and manages to do it while returning 5.1 L/100 km. When the boys and girls back in Milwaukee shoehorned this rocket launcher into the svelte waistband of the Dyna chassis, they may well have created the best Harley yet.

Sitting on the low and deeply scalloped seat puts you in the bike rather than on it, with all the controls at chest level. Picking the Low Rider S up off the side stand will remind you there are 306 kg of motorcycle and fuel between your legs. That’s only 4 kg heavier than the standard Low Rider, but I was still surprised by the heft of this relatively compact cruiser. 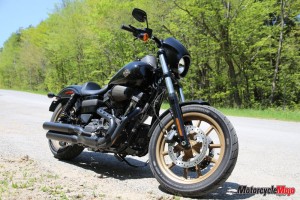 Pan around the cockpit and you’ll see the usual Harley spec controls and gauges – thankfully, Harley subscribes to the philosophy of “Don’t break what’s already fixed.” The one pleasant surprise I found was a multifunction cruise control switch. A bonus, because I got caught in a very unexpected thunderstorm just minutes into my first ride, and once the cold had numbed my extremities, that little multifunction switch let me shake some feeling back into my right hand.

Thumbing the starter summons the beast to life, kicking and shaking. The traditional gentle throbbing of the stock 103 engine is replaced by an oscillation that had the metal rear fender trying to shake the signals off like unwelcome rodeo riders. The bars, likewise, doing their best impression of a sparkler waving about on Canada Day. Grasping the grips sent the vibe through me as well, but it did not feel unwelcomed, and a quick rev of the engine hinted at a much smoother ride ahead.

On the road, the rubber-mounted powerplant showed off its ability to deliver immediate yet smooth power in any gear and at any time. Harley’s electronic fuel injection keeps the throttle as crisp and responsive as any I’ve ever tested, and I say that with great confidence, as even in torrential rains, the system never once missed a beat. That is of particular significance owing to the Low Rider S’ high-flow air filter, which should have a sock-type cover (or even an actual sock in a pinch) placed over it to protect the element from water if rain is expected. At that point, I was in no mood to spare a sock, and so for a full hour, the bike happily ingested moisture without objection. On subsequent rides I became even more impressed by the flexibility of the Screamin’ Eagle engine and its ability to be brutally explosive at the drop of a hat, then perfectly sedate a moment later.

Integral to the performance and efficiency of this drivetrain is a six-speed transmission delivering power to the rear wheel via the traditional belt drive. Shifting from first to second gear comes with a familiar chunkiness, but from there on, it needs only a fan of the moderately heavy clutch and the slightest touch of a toe to engage the next gear.

It’s a good thing the drivetrain is happy to chug along economically all day because the seating position, and the seat itself, allowed me to put on some serious kilometres between stops. The posture is aggressive for a cruiser, with the mid-mounted pegs just about even with my elbows when holding the grips. This positioning puts a 90-degree bend in the knees with arms stretched straight ahead. At speed, the small but effective fly screen encourages you to hunch forward a little farther, and once there, you’re punching through the wind, knuckles first, chin down and shoulders up. If ever there was a motorcycle that wanted you to beat the road into submission and look the part while doing it, here it is.

Thankfully, the brain trust at H-D realized they’d created something special with this model and included a supporting cast, as it were, with the addition of upgraded front and rear suspension. The 49 mm single cartridge fork does an impeccable job of dealing with all types of road surfaces while still keeping the front end from diving excessively under hard braking. Despite having only 54 mm of travel on the rear shocks, which are adjustable for both compression and rebound damping, they weren’t harsh. It’s only when you approach some serious, peg-scraping cornering speeds that you feel the bike begin to lose its composure, and the back begins to buck around while the front tries to play catch-up.

Dual 300 mm front rotors with four-piston calipers and braided steel lines work well when the pace is sedate, but need a firm hand to get the Low Rider S slowed down quickly when speeds are higher. A stab with the right foot shows off a very effective rear brake setup that goes a long way toward reducing braking distances. The back brake has above-average feel, which is a good thing, because it has great bite, and locking up the rear would be way too easy if the ABS wasn’t there to ruin the fun. In all seriousness, I did take the bike on some dirt roads that wound up, over and through the Ontario Highlands, and the ABS was much appreciated on approach to a couple of unexpected hairpins.

After spending a week riding the Low Rider S and racking up nearly 1,000 km on virtually every kind of road surface, I found myself – despite many attempts at denial – horribly sad about returning the bike. That’s about the time I went back to the Harley website and started comparing models and options. And, after many hours and far more chrome, sparkly paint and superfluous bolt-ons than could ever be necessary, l stumbled upon the search strategy outlined previously, as well as a new outlook on the company’s products.

There’s no doubt this brand is polarizing; when I bring up the subject of Harley-Davidson motorcycles, there are very few people, even non-motorcyclists, who are indifferent in their view of the brand. Whether it’s love or hate, both camps seem to be equally bullheaded in their opinions. I’ve always tried to view the debate from atop the fence: On one hand, I like their comfort and character, and especially the quality of fit and finish. On the other hand, I’ve always been left wanting more performance, more of a balance between the commotion and the actual amount of momentum achieved. I just haven’t had that light-bulb moment, and so have never fully embraced the whole Harley thing.

Then this Low Rider S came along with its Screamin’ Eagle 110. It has the performance to match its appearance, there’s nothing on it that doesn’t need to be there and it makes you feel like you’re on the way to a bar fight you’ve already won. To be perfectly honest – and terribly crude – I will say to you what I have said to anyone who has asked my opinion of the bike: It’s badass!

Have I Got a Deal for You!

So now I understand some of the allure, but at what price? Retail for the model we tested was $19,499, while the standard Low Rider is $16,799 – not much of a jump, really. When going through the spec sheet, you’ll see that the S model also includes the security option ($455) and ABS brakes ($915). Just adding those two options alone brings a standard Low Rider to $18,169. Now comes the reason for my simplified search strategy. For what is now a difference of only $1,330, Harley-Davidson throws in the Screamin’ Eagle 110 engine, 2-1-2 “Tommy Gun” exhaust, high-capacity air intake, upgraded 49 mm single cartridge front fork, twin emulsion shocks with adjustable compression and rebound damping, and a blacked-out finish. It almost sounds like a no-brainer, yet I wouldn’t be surprised if Harley-Davidson’s web analytics showed that this model had the least views of all 41 offerings. Now that would be a shame, because in terms of value and performance, this model has to be at the very top of the heap. However, given the company’s clientele and their affinity for chrome, custom paint and personalization, the total lack of options on the Low Rider S may see buyers turn to other variants. To those people I say, ride the Low Rider S first, and if it isn’t quite right, hey, it’s still a Dyna, and at last check, there are a few accessories available for one of those. Unfortunately, I won’t be of much help on that search because I wouldn’t change a thing.