Can this returning icon live up to expectations of the brand, and those of the multiple generations of riders born since it last departed?

Unfortunately, I’ve never ridden an original Scout. I did have a toy model of the Second World War version when I was a kid – played with the thing till it was in bits; even then I didn’t throw it out. I never forgot the name of that bike or the company’s iconic logo, but when the Indian brand was revived, those first designs, though classical and incredibly detailed, just didn’t awaken the kid inside. Years later and now having the opportunity to test the 2016 Scout I couldn’t help but drift back to my childhood and think this iconic model has to share more than a few traits with its forefathers. 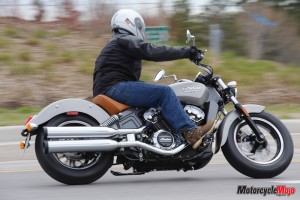 The low-slung tan leather seat on the 2016 version felt just as I’d always imagined it would when I settled in for the first time. The overwhelming impression was of being very close to the ground, not entirely surprising given the 635 mm seat height. In truth, everything on the bike felt as though Earth’s gravity had somehow increased its influence, pulling the bike as close to it as possible.

Our tester arrived in Silver Smoke, a matte grey finish with a pearlescence that sparkles a little in the sunlight. Amazingly, when left on its own to dry after a rain, you can barely see water spots, and fingerprints are almost invisible as well – a journalist and photo-
grapher’s dream, I dare say.

The Scout is also available in Thunder Black, Thunder Black Smoke, Wildfire Red and Indian Red, but that last one is reserved for the optional ABS model only.
Motorcycles without ABS are becoming a rarity, and in this case, not having it saves you about $800 off the sticker, which starts out at a base price of $13,799 for the black one, $13,999 for the other three colours and $14,799 for the Indian Red version with ABS. 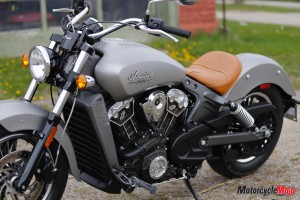 As far as I know, the Scout sets a new bar for the term “base model” – it comes without the aforementioned ABS, a steering lock, a kickstand switch, a storage compartment, a passenger seat or passenger pegs. The only one that really caught me off guard was the steering lock,which I discovered on a dark night in an area where I would have liked to lock the steering.

In reality, all those shortcomings would take a back seat – if there were one. Instead, they get left behind when you start looking at all the details that have been included, and which make the new Scout stand out in any crowd.
A cast frame section supports the rear suspension, swingarm, saddle and rear fender. This allows owners to easily change out the fender for a different look, without having to chop up a rear subframe or inner fender as on many motorcycles.

Running beneath the tank is a tubular steel backbone that connects to another cast frame section at the front, incorporating the steering head and what would normally be the down tubes (which make up the front of most traditional cruiser frames) into one unit. The brilliant part is, the front of the frame is cast such that it also shrouds the radiator, masking what might otherwise be an eyesore and eliminating the need for plastic bodywork.

The pair of multi-spoke wheels are finished in a black powdercoat with brushed outer edges for contrast, mirroring the design of the Scout’s finest feature: its engine. 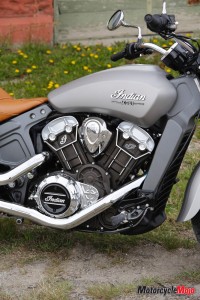 The 1,133 cc liquid-cooled V-twin represents a step forward for cruiser engine design in America. Its twin overhead camshafts, four-valve-per-cylinder layout puts out 100 hp at 8,100 rpm and 72.2 ft-lb of torque at 5,900 rpm. While most engines are only tasked with propulsion, this one is intended to look as good as it goes – and it does both so well.

Start up the Scout and there’s no doubt you’re on a twin, but if blindfolded, you’d be forgiven for thinking it was of Austrian or Italian descent. The cadence of the 60-degree twin is more energetic than we’re used to from twins built on this side of the pond, and with peak torque not arriving till well into the rev range, it pulls similarly to European engines of similar architecture. Off the line, a good launch requires a little more rpm than an air-cooled engine, but when the clutch goes out, the Scout’s relatively light weight of 256 kg (wet) is catapulted down the road, the Indian-branded Kenda tire doing its best to come to grips. When you get into the meat of the power somewhere around 4,500 rpm, there’s an unexpected surge toward the 9,000 rpm redline – the very fact that we’re talking cruisers and redlines should give you an indication of the kind of performance on tap.

The broad power of the Scout means you can lug it around in one gear most of the time, but selecting the right gear lets you exploit the performance in the top half of the rev range. The character of the powerplant comes from its over-square design – meaning more bore (98 mm) than stroke (73.6 mm) – that translates into more rpm, because the piston doesn’t have to travel as far during each stroke.

Getting used to riding a cruiser that can stretch out each gear is more of a pleasure than a chore, though in this case the shifter throw on the low-kilometre example I tested was stiff and vague compared with all the other controls, making fast shifts cumbersome; it was one of the few aspects that reminded me I was on American iron. On the plus side, the six-speed gearbox does help to make highway cruising efficient, netting me over 200 km out of the small but stylish 12.5-litre tank.

On the road, you’ll find the low centre of mass translates into nimble handling, which comes through in every change of direction, yet there’s a surprising amount of available lean angle before the rubber-clad pegs touch down. And once you’ve come to a stop and set the bike on the side stand, you’ll be surprised by just how easy it is to get it upright and negotiate some tight manoeuvres before blasting off again.

A single rotor and two-piston caliper handles stopping duties out front; the same-sized rotor is used in the rear, but is acted on by only a single-piston caliper. With the braided stainless steel brake lines, the system performs better than the sum of its parts would indicate. The initial bite from the front is soft, while the rear takes a mighty stomp to get things slowing down quickly, but once enough pressure is applied to either end, the Scout’s momentum can be reined in quickly enough.

Suspension is non-adjustable all around, though the dual rear shocks were more than up to the task of handling any normal riding or road conditions with my 190 lb frame on board. The front fork, on the other hand, had a hard time coping and bottomed out on me regularly. It felt under-sprung and under-damped most of the time, and when braking hard, it’s so far into the stroke that there’s little if anything left to deal with bumps. Where it does work well is on a smooth-surface street at 40 to 90 km/h, its softness soaking up imperfections with little notice transferred to the rider.

In the cockpit, I found a perfectly comfortable place to spend an hour or so on the open road, although a tad breezy with no wind protection. The single round gauge includes the basic speedometer, trip meter and array of warning lights, as well as a digital tachometer – a nice touch on a bike that revs as high as this one does. The levers are ideal: a little narrower than those on Harleys and more substantial than on most Japanese cruisers. The relation between bars, pegs and seat fits me perfectly, though the seat gets to be firm after 45 minutes or so and the exhaust pipe does its best to melt my leg when in traffic for any amount of time. Additionally, the glue holding the left handgrip onto the bar needs to be applied more liberally.

As a fan of history and provenance – particularly in regard to vehicles – I had to resist the urge to regurgitate historical information about the original variants with almost every sentence written here, for fear of this becoming a dissertation instead of a review. I will say that this new model bears a great weight upon its shoulders, and it’s obvious that parent company Polaris has an understanding of the significance. However, it doesn’t mean that the 2016 Scouts are going to get any special treatment; instead, they are going to be subject to even more scrutiny from those who are in one way or another emotionally invested in the brand.

In that spirit, I’d like to see special attention paid to fit and finish – in particular, the multiple fasteners around the bike could be improved upon with a better quality to avoid early onset of rust; the wiring harness on the right side below the seat, which was hastily wrapped and left in plain sight; and the front caliper, which allows an unobstructed view of the back of the inner brake pad (which is gold in colour and obvious enough that a person who doesn’t ride asked about it).

In reality, these are small issues now, especially when compared with the remarkable job done on this first reiteration of an iconic model. Improving on the 2016 Scout in any significant way is going to be tough and – if the initial sales success is any indication – will occur over many years to come. After having hibernated for over half a century, the Indian brand has proven its staying power by enduring the most protracted of all elements – time. So really, we may not know the true significance of the new Scout until far into the future; but for us here and now, it’s a refreshing step forward in performance and design, and it may just bring back some great memories for you, as it did me.