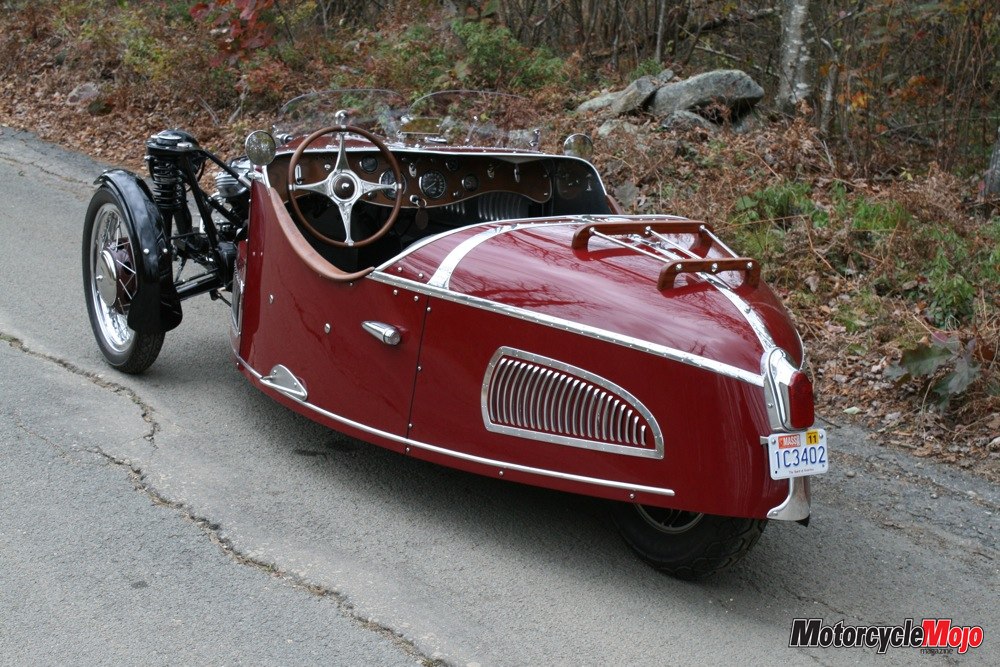 Where he found necessity, invention and success soon followed

When Joe Bolger’s older brother, Jack, returned to the family property near Richmond, Prince Edward Island, after the Second World War, he told colourful and exciting stories about his time as a dispatch rider with the Canadian Army. Jack’s reminiscing about riding single-cylinder Matchless military machines to deliver messages and lead convoys further ignited Bolger’s teenage imagination and budding interest in motorcycles. “He saw the worst of it,” Bolger explains, then adds, “But Jack definitely helped foster my madness for motorcycles.” 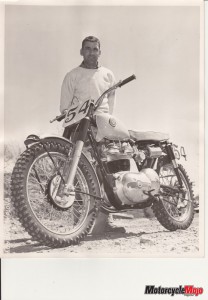 With that introduction to powered two-wheelers, a 14-year-old Bolger bought a 1931 Indian 4. It was badly leaking oil and wouldn’t run properly. Bolger’s dad, a mechanic, had at one time been a partner in a Charlottetown-based Willys Overland Knight and Whippet dealership. He then had his own garage, and Bolger helped his father perform mechanical and bodywork repairs in the two-bay shop. Together, they tore the Indian apart.

The four-cylinder engine had been fitted with Essex car pistons, but the different wrist pins didn’t originally fit the Indian’s connecting rods. To make it work, they discovered, someone had cut the bike’s connecting rods and brazed on the tops of the Essex rods.

Repairs were made, but the work couldn’t have been easy. Bolger remembers his family had just moved to the country and there was no electricity on the property. When fixing the Indian, every hole drilled was bored with a hand-powered breast drill. “The valves were shot,” Bolger recalls, “but I found that Ford flathead intake valves were close enough to work after shortening the stems and drilling holes for the spring-retaining pins – the breast drill called into service again. “I did get that bike running and rode it around PEI.”

Shortly after rescuing the Indian, Bolger packed a bag and left the island to live with an uncle in Massachusetts. He has resided in the northeastern state ever since – but the Charlottetown-born Bolger, who went on to become a motocross champion and designer of specialized equipment for both home mechanics and several of the large Japanese motorcycle manufacturers – is our motorcycling legend from Prince Edward Island.

Born in 1930, Bolger is of the school of thought where hard work and perseverance pays dividends. Shortly after landing with his uncle, Bolger got a job with Nichols & Stone, a chair manufacturer in Gardner, Mass. He was making less than minimum wage, but the mechanically minded Bolger soon proved his worth. He modified the factory’s multi-spindle hydraulic drill table so he could be quicker at his task – quite simply, making holes in hundreds of pieces of wood every day. 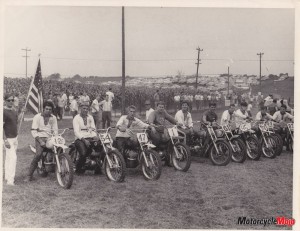 “You got paid according to the pieces drilled or cut, and mainly I was still young with good reflexes,” Bolger recalls. “Injuries were a common occurrence, some as serious as lost fingers and occasionally far worse, but I did okay.”

In 1950, Bolger had earned enough money to buy Triumph’s first 650 cc twin, a rigid-framed 6T. He rode the 6T everywhere, but the motorcycle was sold a year later when he joined the U.S. Army. Bolger served overseas in France and Germany, working in the motor pool performing maintenance on large trucks and other pieces of military equipment. “It kept me out of trouble, and I got to see a little bit more of the world,” he says of the experience.

When he finished his military service in 1953, Bolger returned to Massachusetts and took up work again at Nichols & Stone. He also bought another motorcycle, this one a 1950 Ariel Square Four. He enjoyed the power and touring capabilities of the large British-built four-cylinder bike. In 1954, Bolger was riding the Ariel and stopped at a restaurant. He made a joke as he left, asking the waitress, Sandra, what they were doing that night. Sandra “gave in,” and the two courted, married and started a family.

Bolger’s life changed in 1956, after attending a “scramble” event. Scrambles were early off-road races, and the sport would eventually become better known as motocross action. “I didn’t know what it was,” Bolger says of the scramble race, and adds, “But I sure thought it looked like fun tearing around that nice country track.”

Bolger invested in a German-made Horex 250, a big four-stroke single- cylinder machine with an Earles fork that weighed close to 350 lb. “I pounded around on that, and it was actually fairly competitive. The scrambles game was really just beginning over here, and some people were racing in the dirt on Harley-Davidson Sportsters,” he says.

He raced for a season using the Horex and says the dirt bug had bit – it was fun, and the racing competition was low pressure. But from his earliest days, Bolger says he was always looking for ways to make his off-road iron more competitive, particularly lighter and more nimble. A number of different British machines were tried, from the likes of A.J.S., Cotton, DOT and Greeves. Bolger also rode Spanish-built Bultacos. He’d think nothing of making his own lightweight chain guards, or a set of folding foot pegs. 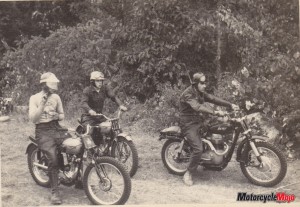 In 1959, aboard a Bolger-modified 250 cc A.J.S., he claimed the Canadian National Motocross Champion, 250 Expert Class title. “Calling it a national championship is a bit of a stretch, because it was just a single event,” Bolger admits. “But at that particular race, I managed to get out in front and stay there.

“I was really too old for the game. I was 26 in my first serious race, and I was in my mid-30s when I was eking out some wins. If you went to a motocross event now at 38, they’d laugh you off the course.”

Of some of his other motocross activities, Bolger adds, “I also hooked up with Bob Hicks and his Cycle Sport magazine. I contributed a monthly column covering the scrambles scene in New England and neighbouring states. These scribblings went on for a number of years.”
Bolger continued racing motocross until 1970 and earned many first-place finishes and much respect from his peers. He says he was “fortunate indeed that our family always stood solidly behind my racing, with Sandra loading up the children and dashing off to spectate at events, even when I was still in plaster from yet another miscalculation.”

Let’s pick up the story again with Bolger’s work career. In the early 1960s, he left the chair factory and went to work for a company that specialized in building backhoes and front-end loaders. While there, he met the man who would become his partner in a small-scale motorcycle dealership. Bolger quit the backhoe job and together the pair rented a 3.5 x 4.5-metre shed where they established the business before buying a house in Holden, Mass, that they then converted to a showroom and service area, with Yamaha as their first brand. The partners went on to operate Honda and Kawasaki dealerships at two locations in Massachusetts.

Because Bolger was involved in the service side of the business, he used his self-taught engineering and design skills to come up with elegant tool solutions for complex jobs. For example, in 1969, Honda sent Bolger a sandcast CB750 engine case long before the dealers had seen the new motorcycle. Honda asked him to engineer a stand to hold the new four-cylinder powerplant. Bolger designed a stand that held just half the case so that complete separation of the cases could be done without removing the engine from the stand. Similar stands were made for Kawasaki and Yamaha. 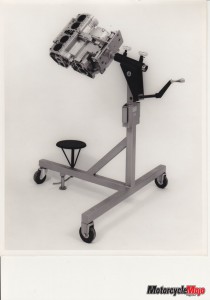 Tools to work on the Japanese engines were in his wheelhouse, too, as he developed the adjustable “Grabbit,” a Vise-Grip-like device designed to hold the likes of countershaft sprockets, cam gears, primary gears and header nuts. He also developed a patented impact/T-handle wrench that, according to a piece of his period advertising, “will outperform the most expensive hammer drivers and converts instantly to a T-handle after fastener is loosened. It offers precise control and eliminates the need for a hammer. Damaged screws (such as those Phillips-head metric screws commonly found in use on Japanese engines) can be quickly removed with our specially ground Extractor bits, our wrench featuring a ‘neutral’ position for this express purpose – these bits will not work with conventional impact tools, as no neutral position is possible.”

And that brings us to Joe Bolger Products, another fascinating side of Bolger’s life. While still a partner in the motorcycle dealership, he built a two-storey 12.2 x 15.2-metre home-based shop in Barre, Mass. It’s heated by a woodstove and equipped with many metalworking tools of Bolger’s own design and fabrication. In 1972, he sold his share in the motorcycle business and began operating Joe Bolger Products – a company that designed, invented and fabricated numerous products, including the aforementioned tools as well as engine stands, for both motorcycle and automotive applications. Another of his inventions was a replacement engine mount for a four-cylinder Honda car motor. The original mount was cast with the engine block, and the piece would often break off in the event of a serious collision. “I came up with a bracket to replace the cast piece, and it just bolted on,” Bolger says. “We sold hundreds of those.”

A Claim to Fame

Bolger also created a long-travel suspension system for Ossa motocross machines. Instead of relying on shocks as long as 45 cm to increase suspension travel, Bolger developed a rocking-beam design that took the strain off damper rods and seals. His system provided more than 20 cm of travel.
By the late 1980s, Bolger had moved into replicating intricate parts for antique automobiles. He specialized in making pieces for cars that would have originally been built between 1912 and 1915, and nothing later than 1930, including components for Pierce Arrows and Duesenbergs. “If you have a piece on your bench, it’s not difficult to make a copy, and I enjoy that kind of work,” Bolger says. 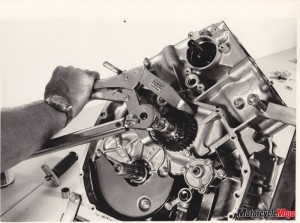 Some 40 years ago, Bolger began building a three-wheel car, in the style of a Morgan but completely to his own specifications. He didn’t work on the vehicle on a daily basis, and it took many years to complete. In fact, by 2002, it was his son, Brent, recently returned from his duties working on a nuclear sub for the U.S. Navy, who finally said, “Dad, if we don’t get to the three-wheeler we’ll never get it done.” The chassis is chrome moly tube, and every body panel was hand-shaped in aluminum by Bolger and his son. Powering the vehicle is a Honda CX650 V-twin engine with shaft drive. “With that powerplant, you have the driveline in hand; all that’s obviously necessary is the need to lengthen the driveshaft. Brent helped with the electrical wiring, too,” Bolger says. In 2013, the family brought the three-wheeler back to his home province and toured around the island. While on that trip, Bolger learned he was being inducted into the PEI Sports Hall of Fame.

One of a Kind

Bolger is also a member of the Maritime Motorsports Hall of Fame and the AMA Motorcycle Hall of Fame, and is proud of the fact he is the only rider to win all eight of the Canada/USA match races in one year. In a testament to how much of a gentleman he was both on and off the track, Bolger also won numerous sportsmanship awards while racing – all as voted on by his fellow riders.
Although he no longer spends endless hours out in his workshop, the talented self-taught engineer continues to enjoy solving complex mechanical problems and tinkering with metal. Bolger is indeed a living motorcycle legend.