Home / Issues / July 2016 / The Gentrification of the Canadian Motorcycle Shop

There seems to be a growing trend in Canada’s motorcycle scene thanks to a hipper, more affluent younger crowd

I doubt I’m writing about breaking news: you’ve likely noticed the trend on your own. But there’s a movement underway in the Canadian motorcycle scene, and how motorcycle shops do business could be affected. What you can be sure of is it’s a phenomenon that is national in scope. Let’s start in my hometown of Vancouver.
To the right, racks overflowed with leather. Riding boots were crowded in above the hangers, some overlapping. Full-length riding suits blended in with textile jackets and seemed to be bending the small retail outlet’s existing display racks. 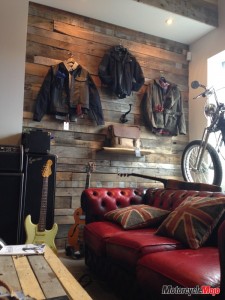 East Side Re-Rides is a consignment motorcycle-wear store and has been gradually gathering gear for eight years now. The shop’s old space was, as of December 2015, not meeting the demands of its inventory. Owner/operator Elaine Miller has since moved from the outer reaches of Victoria Drive in south Vancouver to a hipper and pricier part of town: 16th Avenue and Main Street.

“We’re bulging at the seams,” Miller said back in December as she packed for the move. When I asked about who her eclectic shop caters to, she rolled off a simple answer. “Our clientele ranges from motorcyclists to people who just like to wear leather jackets.”
She also said the culture and customer base for motorcycle gear is changing. And it would seem that with a growing affluent crowd of young people moving into downtown Vancouver, they are less likely to head out to the suburbs for their leather fix. Miller told me late last year that the right space came up and it seemed the right time to make a move. She anticipated twice as many customers as at their old home.

“The Main Street area is really moving. There are a strong number of single-proprietor stores along Main Street,” she told me. And Miller’s store is not the only one taking advantage of the close proximity to a downtown-living customer base. 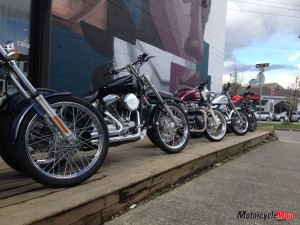 There’s The Shop Vancouver, for instance. Although selling brand-new merchandise from the likes of Roland Sands Design and Saint, and proclaiming itself “Vancouver’s hub for motorcycle culture,” The Shop’s four years on downtown Vancouver’s Columbia Street has also featured community rides, such as that for International Female Ride Day, and events such as the wildly successful Spit ’n’ Shine at Crab Park near Canada Place, where an overwhelming number of motorcycles of all stripes “basked” in the July sun overlooking Burrard Inlet.
“It was close to where we live,” says Tj Schneider, The Shop Vancouver’s owner. “Our friends are in the area, and we are in a pretty dodgy part of town, so we could almost afford it. It was sort of just a perfect fit.”

Does Schneider feel like a trendsetter? After all, he is selling some higher-end motorcycle fashions. Does he feel that he’s tapping into a growing urban market for upscale motorcycle gear?
“It came about because we wanted to create a space that appealed to people like us,” Schneider tells me. “It wasn’t anything about ‘This is a growing market and we can make money.’ Things just sort of fell into place at that time.”

Vancouver’s increase in motorcyclist-lifestyle-friendly shops doesn’t end there. In late 2015, an outlet of International Motorsports, featuring a “lifestyle and motorcycle boutique” filled with Triumph apparel and a showroom dealing in Triumph, Moto Guzzi and Aprilia, moved into a large West 2nd Avenue space.
Then there are more indie shops and full-service places such as Rising Sun Motorcycles, which took the risk of expanding from Vancouver suburb Ladner to Franklin Street near downtown Vancouver. It would seem a growing urban motorcyclist customer base is upon us here on the urban West Coast.

A Jump to the East 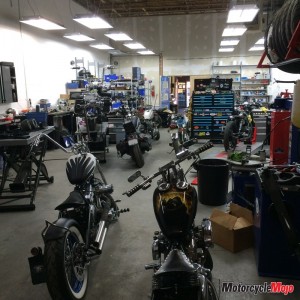 In Montreal, it’s called “La Culture Garage.” Boutique Le 63 has become, not unlike The Shop Vancouver, a hub for this growing trend. It’s a start location for outgoing group rides for the members of “club 59ers,” and the shop is also a centre for retro moto gear. Pitching everything from British-made Halcyon goggles to trendy apparel by Australian bike salvage-and-restore company Deus Ex Machina, Le 63 seems a haven for a tattooed and well-bearded generation enjoying all things retro and vintage. A recent addition to Avenue du Mont-Royal Est, Le 63 is extremely central. Café racers and beard-grooming products also feature quite heavily on its website.

“We opened our doors in May 2012. So we’ve been open for four full years,” says owner/operator Andrew McCracken. “Toronto doesn’t have many motorcycle-related shops or dealerships downtown, so being motorcycling enthusiasts and seeing more and more people starting to ride in Toronto, it seemed like a good business to take a shot on. On top of that, it’s where we live and where we wanted to work.”

About as central as you can get in Toronto, on Ossington near Dundas, this boutique is clearly looking to capitalize on a young and affluent urban dweller interested in the “motolife.” With Town Moto solely occupying a niche in downtown TO, I wondered how business is going for McCracken.
“Business is good. It seems like more and more people are getting on bikes every year . . . so we have a pretty good situation in that regard,” he says.
But why now? Not every shop is putting upscale merchandise on its shelves. Has there been a perceptible change, in McCracken’s view, of how urban shops like his do business?

“I think as long as ridership is going up every year, so will the demand for motorcycle gear. We seem to do a little better every year, and I believe that has to do with the new riders we meet each year as well as our loyal customers who have been with us since the beginning.”

Surely there are those who are not riding the wave of a trend, but who have come into their own because of what they’ve been doing for years?

There are. Such a shop is Lucid Kustoms in Calgary. Although not centrally located, being on Edmonton Trail, it’s been around for a while. Owner Kevin Clarkson built his first custom motorcycle in a single-car garage in 2008. The resulting business has grown by leaps and bounds.

Clarkson tells me motorcycle registrations have doubled in Alberta over the past decade. What he characterizes as a growing affluent customer base is contributing to his business getting increasingly busy, growing in eight years from a garage-based company to one of 22 employees. At the start of 2016, Clarkson moved his business from an 1,800-square-foot space to a 2,000-square-foot retail/service shop and a 4,000-square-foot machine shop, build space, storage space and head office.

Clarkson definitely sees the trend not only in Canada and the United States, but across the planet, in countries such as the United Kingdom and Japan. He also describes what he sees as the younger generation of riders coming up in the world. “The trend is really about the ‘moto lifestyle.’ A lot of our affluent younger clientele are inspired by the vintage motorcycle scenes from the ’50s, ’60s and ’70s, as much by the bikes they ride as the clothing and accessories that go along with it,” he notes. “Some even get their hands dirty working on their motorcycles in our community garage program. It’s a strong trend and I’m sure it’s going to stay for a while.”

It turns out that Clarkson may indeed be riding the crest of a wave in his business. Lucid acquires 1970s bikes just to hang on to them for future builds. He tips his cap to the shops on the outskirts of town, the ones that have been in existence for 30 or more years. He admires the shops that provide motorcycle service and repair, where mechanics get their hands dirty and will still be there when current trends fade.

“Today, Lucid would fall someplace in the middle of all this,” Clarkson says. “We started as a couple of guys building bikes, grew to be a full-service shop that did customs as well. Now we offer a full line of service and maintenance, fabrication, machining, custom parts, Transport Canada-certified inspections, insurance repairs, OEM and aftermarket parts, lifestyle products, apparel – we even have two destination coffee shops for riders,” he observes, then adds, “It’s been quite a ride.”

Walking into the new location of the recently moved East Side Re-Rides in Vancouver, I see that the sunny March day has brought out several bikers on café racers to rumble down nearby Main Street. Elaine Miller is talking to friends at the shop’s desk, looking at their recent ride photos as I look at the larger, different space – the neatly lined-up boots, the increased area to try on those boots, the tidy helmet racks.

Miller tells me the response in the community has been good; the move had been chaotic but successful, and the space is much more appropriate to the amount of consignment gear she has accumulated. She looks outside at the bright day. “I’m looking forward to more of this kind of weather,” she tells me.
It would seem that so are most motorcyclists shaking off winter and remounting their bikes. But for Miller, it would perhaps mean more customers coming into her new shop location, looking for gear for the riding season.

So you see, changes are coming. If this current trend, generated by a new affluent and younger demographic keen on a perceived motorcycling lifestyle, is in no danger of fading out, there certainly are business benefits to it. But where will it take motorcycling in Canada? Social media is playing a part in its growth. But will this interest in the retro and vintage side of the market create a watered-down version, a renovated perception of the past, where spruced-up 1970s café racers will have motorcyclists judged based on how shiny their dual-shock suspension is? Or will there be something new to come out of all this, something unique for the sport that boosts the importance of accomplishment over appearance and moves motorcycling into the future?

Is the trending motolife enough? Is it enough that it’s generating new interest in the sport of motorcycling, breathing fresh life into it?

In the end, it seems, all of these retailers are taking a chance together. We’ll see if the gamble pays off.