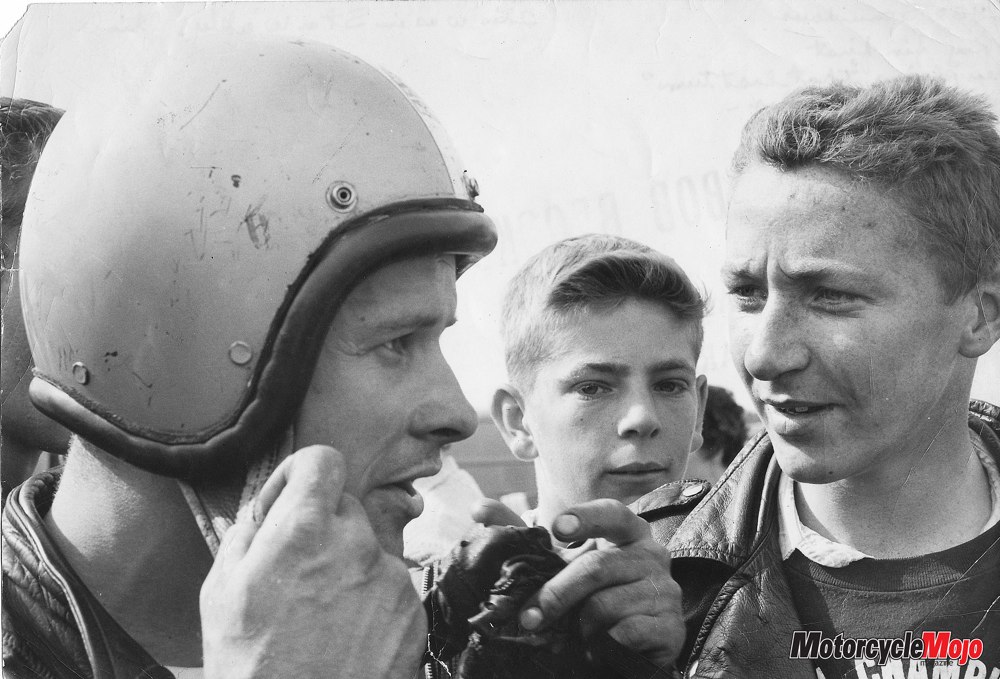 Even from his early days, Blakney had a knack for working with internal combustion engines

Your Attitude Is Everything: Do as much as you can for as long as you can.
That’s the title of a book Roy Blakney, at 85, plans to write. He’s led an action-packed life and, for the most part, it’s always revolved around motorcycles. Inducted in 2013 into the Maritime Motorsports Hall of Fame, Blakney is our legend from New Brunswick.
Born in 1931 in Moncton, Blakney moved with his widowed mother and three siblings to live with his uncle and grandmother on a hardscrabble farm in Goshen, Albert County. There, he was introduced to motorcycles. 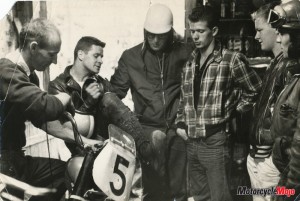 Outside the one-room schoolhouse Blakney attended was a gravel crossroads. Beginning in 1940, during the war years, the army was training on nearby land, and dispatch riders and convoys would travel along the local roads. When the Canadian Provost Corps wasn’t marshalling traffic, riders would spin their machines around in the gravel, and the children from the schoolhouse were allowed outside to watch.
“They were doing it just to give us kids a thrill,” Blakney explains. “I was amazed by these two-wheelers and the noise that they made.”
Shortly after the war ended, Blakney’s brother Bob, older by four years, turned up at the farm in the middle of the night riding a surplus Indian Scout. There was no headlight, and the header pipes had fallen away from the exhaust ports. Needless to say, the machine made a tremendous racket and Blakney’s uncle, a suspicious fellow at the best of times, ran out to the barn armed with his shotgun to confront the beast – only to find Bob with a cantankerous and cranky motorcycle.

A Natural with an Engine 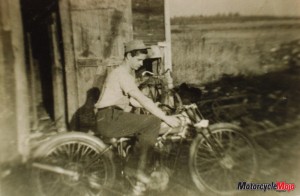 Gasoline must have been in Blakney’s blood, as his late father had been a dealer for Willys cars, and a machinist and inventor as well. While on the farm, young Blakney took an interest in anything with an internal combustion engine and soon became responsible for keeping his uncle’s 1929 Model A Ford on the road. Together, Blakney and Bob tinkered with the Indian, which was soon traded for a 1942 Harley-Davidson WLC. The two brothers rode the machine over all sorts of terrain, from tarmac to gravel to mud. This riding experience gave Blakney an appreciation for fine control and balance, skills that he’d shortly put to good use.

His first motorcycle was a basket case 1924 New Imperial with a 350 cc side-valve single-cylinder engine. To learn more about British motorcycles, Blakney ordered a parts catalogue from Saskatoon’s Nicholson Bros. Motorcycles, along with a copy of Bernie Nicholson’s book, Modern Motorcycle Mechanics.
“I had a tremendous amount of help from Bernie on the New Imperial,” Blakney says. “He’d write me letters, draw diagrams, send parts and tell me what to look for – he launched my career in motorcycles.”

By the time Blakney was 14, he’d returned to live in Moncton. He was in correspondence school, and opened a bicycle repair shop in an old tinsmith’s shed. With no money to advertise his services, he would place small handwritten notes on all the bicycles he came across in the city describing his services and the location of the shop. He soon had several bicycles in for repairs, and would also tune a motorcycle if one came through the door. It was while road testing a customer’s machine that Blakney met the front end of a car at an uncontrolled intersection. Blakney didn’t have a driver’s licence, nor a business licence, and he had to go to court. Luckily, the judge who heard the case had years before purchased a car from Blakney’s father, and he recognized the name.
“He gave me a note to take to the new mayor, T. Babbitt Parlee,” Blakney recalls. The mayor had also known Blakney’s father, and he gave the young teen a break. “You’re underage, but I’ll issue you a special business licence to make this all a legal enterprise,” Blakney remembers Parlee saying. 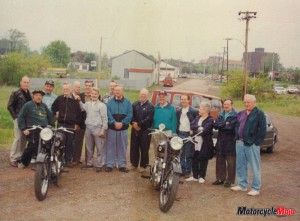 While operating his bicycle and motorcycle shop, Blakney also took a job with the T. Eaton Company, assembling 250 cc
Jawa and 125 cc CZ motorcycles and teaching the buyers of these machines how to ride. He then told the neophyte riders that Eatons offered no service, but he gave them the name of a nearby shop that did – that’s right, Blakney Cycle & Motor Service. He’d moved the shop from the shed to a larger barn, and was repairing many of the motorcycles in the Moncton area; by 1951, he was selling Royal Enfield machines. Within three years, he’d add many brands to the roster, including AJS, Ariel, BSA, Francis-Barnett, Matchless, James and Triumph. Several German makes also followed, and another move was made in 1955 to a new shop at the edge of Moncton on Tannery Street.

Around the same time, Blakney and Bob organized a group ride of almost a dozen Moncton motorcyclists. Their destination was Laconia, New Hampshire, to attend the Motorcycle Week Rally, an event that had begun in 1916. “We took people who’d never seen a turnpike or a customs office, and there were many adventures on that trip,” Blakney says.

During the 1950s while Blakney was growing his business, he became a member of both the AMA and CMA, and raced machines such as Francis-Barnett and James motorcycles in the dirt at a place near Petitcodiac called The Ranch. This was a venue Blakney helped design and build that’s been described as a “motorcycle playground,” with a dirt track and obstacle courses.
Next, he was on asphalt campaigning BSAs and Triumphs at the old military Scoudouc airport track. Blakney took all of his experience riding in gravel and dirt and came up with a racing style that was all his own – and his aggressive approach won him many competitions.

Time to Move On

By 1961, however, Blakney was itching for broader adventures. After a tractor-trailer rolled down a hill, partly demolishing his Moncton shop, he decided it was time he sold his Ariel Square Four and leave the country. Blakney and two friends packed up their motorcycles and shipped them to New Zealand. The trio then headed west to Vancouver by car, where they too boarded a New Zealand-bound ship. While sailing toward a new life, Blakney met famous Auckland-based racer and motorcycle dealer Len Perry. Before disembarking, Blakney had a job with Perry, and the ex-pat Canadian became shop foreman and joined Perry’s racing team.

Blakney continued to compete in all forms of motorcycle sport, from speedway to grass track to road racing. He campaigned a Matchless G45 racer and a hybrid machine put together with the help of world champion car and motorcycle racer John Surtees. The pair created the bike using an AJS 350 7R frame fitted with a 250 cc NSU engine that performed very well. One of Blakney’s fondest memories of his time in New Zealand was meeting Burt Munro, of World’s Fastest Indian fame. 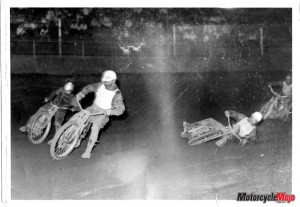 “[Burt would] stop in at the shop on his way to the black sand beaches and get old tires and other bits and pieces,” Blakney says. “So, I got to meet Burt and chat with him a bit, and one time he mentioned having trouble with the cork float in his carburetor. I thought I had a fix for it, and he left me the carb.”
So, using pieces of copper he had in his shop, Blakney “soldered together a float. I had no way to test it, but I gave it to Burt to run in his old Indian and it worked very well. As far as I know, that float is still in the carb that’s on the bike.”
While still in New Zealand, Blakney quit the motorcycle business and went to work with Porsche and Volkswagen, becoming a head inspector trained in both New Zealand and Wolfsburg, Germany – home of the Volkswagen factory.

Late in 1965, Blakney left New Zealand with a female friend who played the guitar and sang “like Patsy Cline.” They landed in the United States, bought a Volkswagen camper van, and drove more than 51,000 km around Canada, the U.S. and Mexico. After the tour, Blakney ended up settling in south San Francisco and began working with a Porsche/Volkswagen distributor/dealer before opening up his own shop, Acme Auto, servicing Porsche, Volkswagen and later Honda.
Ever restless, Blakney decided he’d like to have clean hands after years of living with grease-stained fingers and left the auto-service business. There was nothing, he says, that he enjoyed more than travelling, so Blakney took classes in travel and tour management. He opened a travel agency, then eventually sold his share of the business and became a freelance international tour manager, giving him a ticket to roam all over the world.

Back on Two Wheels 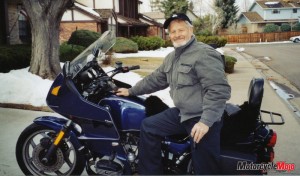 But motorcycles returned to Blakney’s life in 1975, when he got a BMW R90/7. “That launched me back into motorcycles,” he says. “I’d get another BMW every year, and would often ride from San Francisco to Daytona.”
Blakney continued to tour extensively aboard motorcycles, and moved to Denver in 2002. He figures there are more than two million miles under his belt. He’s ridden all manner of touring motorcycle, from BMWs to Harley-Davidsons, but his favourite machine is the BMW R100RT, built between 1981 and 1985.
Although he’d owned and ridden an R100RT when the bikes were new, he’d since moved on to other machines. But, the R100RT stuck in his mind, and in the mid-1990s, Blakney began searching for a low-mileage example.

“The R100RT is a great touring motorcycle, and it never caused me grief,” Blakney says. After much looking, he says, “Lo and behold, one turned up in the nearby town of Golden [Colorado]. A gentleman was selling his 1983 R100RT that had sat for seven years, and it only had 3,200 original miles on it. There were brand-new tires on it and a fresh battery in it.”
There are now 163,000 miles on that R100RT, and it’s a machine he still owns. Blakney says it’s never been apart for anything and that he does his own service on the BMW. “It’s been coast to coast several times,” he says.

In 2013, in fact, Blakney led a motorcycle tour from Denver to the Maritimes, and he rode the R100RT 16,600 km in 30 days. The group rode across the northern states to Ontario, Quebec, New Brunswick, Nova Scotia and Prince Edward Island, and back through New England, westward to home. He will be conducting a similar tour in 2017, quite simply doing as much as he can for as long as he can.