It’s been around the block a few times, but there’s nothing long in the tooth about this big bagger

Late in the riding season of 2016, a great weight was lifted off me. Its enormity was almost unbearable and it even threatened to cripple my career. Thankfully, a close friend, to whom I owe many thanks, was able to help me right the ship, as it were, and just in the nick of time, at that. Had he not been there, I’m certain all 382 kg of Vaquero would have crushed my pride, and possibly some bones, and most certainly could have left me pinned to the ground, helpless and ripe for social media mockery.
I learned a lesson that day, and that is, there’s lots of steering lock available on the Vulcan 1700 Vaquero ABS SE it turns out to be 35 degrees in either direction in fact: plenty enough for manoeuvring in tight quarters, and when combined with a full tank of gas and a moment of inattention, just enough for me to make a fool of myself. 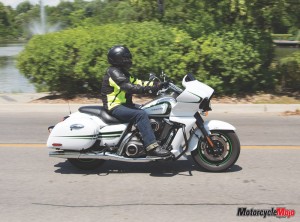 But my near mishap was not the fault of this long-standing member of the big-bagger segment. The Kawasaki Vulcan 1700 Vaquero ABS SE is now entering its seventh year of production, and has done so without major updates or much change of any kind, for that matter. Aside from the bold new graphics treatment, there hasn’t been a lot to report on since its introduction in 2011, and that’s quite a feat these days. It means the big Kawi must be doing something right . . . right?

Kawasaki designed this bike to capture a piece of North America’s bagger market, and if I were to venture a guess at which model the company’s crosshairs were trained on, it would be the Harley-Davidson Road Glide – a good choice, to be sure, and one of my personal favourites. The similarities between the two are obvious: the large frame-mounted fairing with an unmistakable profile, chopped windscreen, integrated audio system, large V-twin engine, hard-shell saddlebags, a solo seat and a classic design theme. Performance specs are close between the two, and customization is prevalent among owners of both, indicating Kawasaki has successfully tapped into the custom-bike culture with the Vaquero. And that’s no small feat, given the number of Japanese cruisers that have missed the mark in the cruiser segment over the last few decades. Don’t get me wrong, most of them ran and performed beautifully; they just didn’t always evoke that feeling some look for, especially in this segment. After all, we’re talking about big bikes and bigger price tags in many cases, and the people spending that cash have certain expectations. So what does dropping $18,999 at your local Kawasaki dealer for a 2016 Vaquero SE get you? Well, to start with, one big
ass bike! 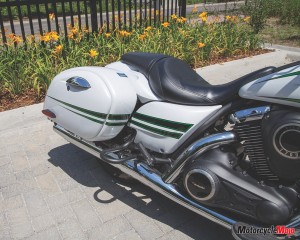 The fact is, a full-size touring motorcycle with a 1,700 cc liquid-cooled V-twin is going to be a hefty piece of machinery. This one’s no exception, though it carries the majority of its weight fairly low. With a seat height of only 730 mm, the rider’s rear feels as if it’s resting on the centre of gravity – while the bike is moving, that is. At a standstill, the frame-mounted fairing can be felt when lifting the bike off its side stand and the centre of gravity feels much higher. Thankfully, that 1950s Chevy-styled headlight and fairing looks as distinctive as ever, and more importantly, it works. Even the chopped windshield (really just a wind deflector) is acceptable, which says a lot coming from me, because I normally can’t stand them or the buffeting they induce. But in this case, it gets a passing grade. If you’re six feet or taller, you might think about buying a higher one that actually qualifies as a windshield. 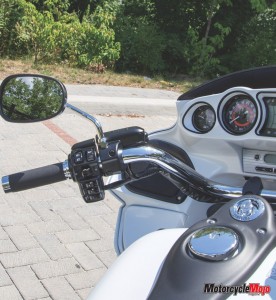 Rolling out of Kawasaki Canada on the Vaquero and into claustrophobic afternoon traffic didn’t leave a lot of time for familiarization; but no matter, the layout is dead simple and pure muscle car-like. A row of four round, black-faced gauges with classic white font and needles chasing red lines greets the eyes. The centre LCD provides vehicle and trip information, as well as a home for all the warning lights.
Below is the stereo with a billet faceplate that looks as though it was ordered right out of a hot rod catalogue, and it’s flanked by two speakers that deliver decent sound quality. The audio system includes an AM/FM radio, is satellite radio ready, has iPod and mp3 connectivity and can be plugged into communication systems and CB radios, though the cables required for patching in need to be purchased separately through Kawasaki’s accessories catalogue.

All the controls fall to hand naturally, and there are few surprises to worry about. The left-hand-mounted audio controls are easy to use, but are a bit of an eyesore in an age where scroll wheels and integrated touchscreens are all the rage. The right-hand-mounted cruise control switches are equally functional, but with the same “bolted on” aesthetic.

Fat grips with big, chunky levers suit the bike well, as do the large cushioned floorboards and heel-toe shifter. Despite utilizing a ride-by-wire system to activate the dual 42 mm throttle bodies, the right hand grip is still attached to a good old-fashioned cable for the sole purpose of producing just the right feel.

Marketed as a stripped-down tourer, the Vaquero comes with only passenger pegs and not much more than a solo seat, or at least I’m assuming it’s only meant for one, because the portion sticking out behind my posterior wouldn’t have kept a passenger happy for more than a few moments. But that’s why Kawasaki makes the Voyager, with its top-bag backrest and thick, padded passenger saddle. After all, Vaquero is a Spanish term for cowboy, and they always ride off into the sunset solo.

As mentioned, this bike is a handful when it’s standing still, especially with a full tank of gas, which is exactly the state it was in when I nearly dropped it. So my first piece of advice to a new owner would be, when standing still, don’t let the bike lean over any farther than it would while on the kickstand, especially with the steering at full lock. Actually, that’s sound advice for any bike.

Not surprisingly, low-speed handling is slow and requires some effort, partly due to the wide 16-inch front tire. The fat front tire look was “in” back in 2011, but the tall and narrow front hoops of today’s custom-bagger scene have replaced it. I think Kawasaki has missed an opportunity here because aftermarket companies are doing big business with front-end conversions for the Vaquero, not to mention it totally transforms the bike’s looks.

Once up to speed, the bike is rock steady and terribly comfortable. Corners aren’t effortless, but they are negotiated with confidence and it will happily drag the floorboards, which, surprisingly, allows for a generous amount of lean angle before touching down.

Suspension is plush, and the rear’s twin air-assisted shocks with four-way preload adjustability make very effective use of the 80 mm of travel. Assisting the suspension in its duties, especially during hard deceleration, is the K-ACT (Kawasaki Advanced Coactive-braking Technology) ABS. The system links the brakes above a specific speed and balances braking force, front and rear, to prevent front-end dive and wheel lock, and generally limits the dangers of grabbing a handful in an emergency. It all works as advertised, allowing me to drag the back brake at slow speeds to help with tight turns and coming to a smooth stop, and makes the brake pedal almost superfluous the rest of the time. Power from the dual 300 mm front rotors and four-piston calipers was better than I expected, and feeling the bike squat under hard braking rather than dive was reassuring.

Not surprisingly, the headline for this platform is the 1,700 cc liquid-cooled, 52-degree V-twin and its waves of torque. Hanging around in a crowd
of big air-cooled twins, you’d think this mill would set itself apart thanks to more modern technology, yet Kawasaki has managed to make this feel much like a big air-head – ironic given others in the class are investing so many resources on doing the same thing. Picking up the throttle hard off idle produces a shudder through the bike, and by just 2,750 rpm, this thing is churning out its peak torque of 107.7 ft-lb.

Redline is 6,000 rpm, but early shifts are rewarded with another broad wave of torque. The first four gears offer brisk acceleration on demand; however, both fifth and sixth are considered overdrive gears, and either works well on the highway. Choosing to roll around in fifth allows for easy passing, while sixth will net slightly better fuel economy. This was done to allow the final drive sprocket to be the most efficient size. Smooth shifting of this transmission requires a committed effort at the shift lever – get lazy and you might miss a few here and there owing to the force needed to bang home another gear. A carbon fibre belt delivers all that commotion to the rear wheel with efficiency, and the promise of low maintenance and long life.

Should Kawasaki be interested in my suggestions for items to improve on, I would encourage a switch to top-loading saddlebags. The current ones are good and have the benefit of requiring the ignition key to open and close them, so they’re not likely to dump their contents mid-ride and you won’t be able to ride away without completely ignoring the fact they’re wide open. But being able to drop my stuff in and close the lid would be better than the dance we all do when trying to close a clamshell that’s been packed to capacity and slightly beyond.

Second is the exhaust. The sound is nice and meaty under load yet unobtrusive at idle – perfect! And the twin pipes, one on each side, are a great touch, but can we get a little more insulation on the crossover pipe that passes just below and in front of the seat? Damn, that thing likes to roast the chestnuts in traffic. There’s plenty of room there and it would help with the heat coming off the rear cylinder as well.

Steady As She Goes

Since there are few surprises to be had with the Vaquero, aside from the one I embarrassingly gave myself while sitting stationary in the driveway, I’ll reinforce what’s already well known about this model: It’s a big, powerful cruiser that eats up kilometres while returning good economy and comfort. It has amenities on par with most of its competitors, can be customized to suit just about any taste and can be had well equipped for around $20,000.

There are not a lot of bikes that occupy the same space at the same price, so it’s reasonable for Kawasaki to have allowed the line to carry on as it has. For 2017, the Vaquero gets a Cardinal Candy Red paint job and a price tag of $19,399, and that’s about it, really. Surely it won’t be much longer until we see some change in this part of the company’s lineup, but for the time being, the Voyager and Vaquero continue to hold their own in the competitive touring segment.