The 1290 GT is comfortable for long-distance travel, but it’s nimble and powerful enough to bring out your inner hooligan

There are some bikes that seem to entice you into a ride more than others. The KTM 1290 Super Duke GT is one of those bikes. The GT is KTM’s version of a touring bike, but the Austrian bike maker has a different idea of what a touring bike should be. To be fair, it’s really a sport-tourer, with a very heavy emphasis on the “sport.”
The GT is based on KTM’s Super Duke R, but features a few touring amenities, such as a frame-mounted fairing with adjustable windshield, cruise control, easily removable 30-litre side cases, and a seat with a larger passenger section. But it’s still a Super Duke R at heart, and that bike had set the bar for power among naked roadsters, with its 1,301 cc liquid-cooled, 75-degree V-twin boasting 173 hp. Most sport-touring bikes use detuned versions of engines from their sportier stable mates, but no such detuning affects the GT’s powerplant, so that number hasn’t changed, making the GT the most powerful sport-tourer on the market. But where the GT really excels is in peak torque; at 106 ft-lb, it surpasses even the torque-heavy Ducati Diavel by 10 ft-lb. 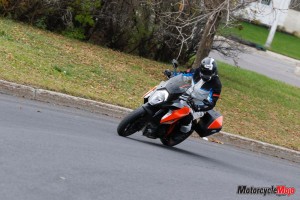 My time aboard the GT was spent at the tail end of the riding season, and although the temperature and weather might not have been conducive to an enjoyable ride, the GT compensated by making it both fun and pleasurable. The morning temperature in my hometown of Montreal was about 4 C when I took off in a northern direction toward the Laurentian Mountains, but by the time I got there, the temperature in the GT’s LCD display read 1 C, while a little snowflake displayed in the secondary screen, located to the right of the tachometer face, to warn me of possible frost conditions.

The GT has a slightly aggressive riding position, something I’d remedy by installing handlebar risers to provide a more relaxed reach to the grips. The foot pegs are on the high side, but this didn’t hinder long-term comfort, especially since the flat, wide seat proved remarkably comfortable over time. 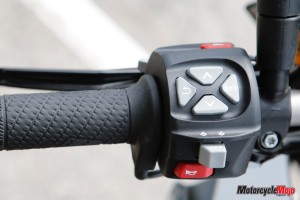 The bike is well equipped for cold weather, with standard heated grips and a 12-volt power socket conveniently located in the fairing bracket, just below the instruments. I cranked up the grip heat to maximum, but unfortunately there’s no dedicated button to operate them, and you have to use a series of buttons on the left-hand switch pod to scroll through menus in the left-hand screen to turn them on and adjust their heat level. It took five button pushes to scroll to the screen menu that controls the grips, and then two more pushes to get back to the main screen. But for all that hard work, the grips at least warm quickly. For added weather protection, I’d add hand guards and a taller aftermarket windshield.

To keep my core warm, which is very important when riding in cold weather, I plugged my heated vest into the easily accessible accessory outlet. One minor annoyance within the handlebar controls was the high-beam switch. It’s a European-style lever located on the backside of the switch assembly, and it protrudes enough that it’s easily triggered when wearing thick gloves.

Power From Mild to Wild 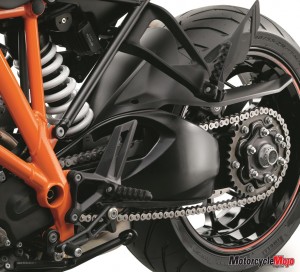 Since the cold weather reduced traction, while in the city I left the bike in Rain mode, which provides the softest throttle response of the three ride modes (Street and Sport being the other two), and cranks up the traction control. I think that even in warmer weather this would become my default mode in the city, since it really softened the GT’s otherwise heavy-handed power delivery. The rest of the day was spent in Street mode, as the brutish Sport mode proved to be on the Mr. Hyde side of sane. While passing a car in Sport mode, the bike unexpectedly lifted the front wheel, in fourth gear, so if Sport becomes your default mode, use discretion.
On the highway, the smooth-running engine belied its superbike-worthy output, droning along vibration-free at just a touch less than 4,000 rpm at 110 km/h. I’d recommend using the cruise control on long stretches, if for no other reason than to preserve your driver’s licence, because speed can creep up unexpectedly on this beast. 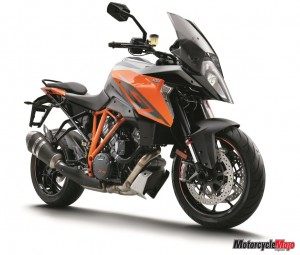 With no real destination in mind, I headed toward Lachute, about an hour northwest of Montreal, and the hub of a number of great motorcycling roads. The GT’s fairing provided a good buffer between the single-digit temperatures and me on the highway, especially with the screen at its highest position. Working the screen is a bit awkward, since you must first push it forward to free its locating tab from its mount, then lift or drop the screen and pull it back to lock it in place. This takes some muscle, but with practice, it was easily accomplished with one hand while riding. Some lube on the locating tab would have probably made the job easier. 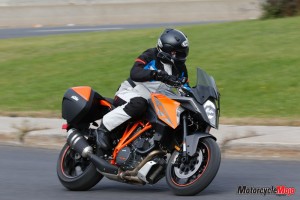 The real fun began on some of the twisty and bumpy roads in the area. These numberless narrow lanes traverse the township of Gore and snake through what used to be known as Shrewsbury, a former town turned ghost town turned dust after the last remnant of the 19th-century village, St. John’s Anglican Church, burned down in 2014. Overgrown trees flank these roads, which wind about incessantly, leaving little time to take a breather between turns. This is the GT’s playground, and its chassis is something to be marvelled, allowing the bike to lean effortlessly and transition quickly from side to side.

The adjustable, semi-active suspension is on the firm side, even in the softest Comfort setting, exemplifying the bike’s European heritage; this is a sport-tourer designed primarily for smooth European roads. It managed most bumps handily, but threw me into the air over larger frost heaves. Nonetheless, the GT egged me on, and I realized when the Shrewsbury road intersected Highway 329 that I was very near to Morin Heights, where another ghost of the past resides.

I turned north onto the 329, following its long, flowing sweepers in unwavering stability until I spotted the hidden turnoff for Perry Road, where tucked behind a curtain of overgrown brush rests Le Studio. For rock music buffs, Le Studio is a landmark. This former recording studio saw artists like April Wine, Chicago, The Police, David Bowie and Rush, among many others, pass through its doors and record timeless classics before it shut down in 2008. Despite some recent efforts to raise money to restore it, what remains now is a derelict shell, gutted and vandalized inside and out.

Even with the electric assistance keeping me warm, and maybe owing to the ominous aura the place radiated, I began to feel a chill and decided to turn south, back to Montreal. But aboard the GT for some reason, I just couldn’t take the straightest route, and I meandered instead along a number of paved and unpaved roads, zigzagging back to the city in a more or less southerly direction.

The six-speed gearbox is light and is assisted by a quick shifter, allowing clutchless shifting, but I alternated between using it and not, because I found it had too much of a delay when cutting the ignition to facilitate the shift, making gear changes sometimes clunky. The brakes, of course, are supersport strong, though the rear displays an unusual lack of feel and requires high effort before slowing the bike. ABS is standard, and it includes a Supermoto mode that allows the rear wheel to lock if “backing it in” is your thing.

There’s a lot to like about the KTM 1290 Super Duke GT, including its incredibly powerful yet smooth engine, which would feel as readily at home in a supersport chassis (its origins can be traced to the KTM RC8, after all) as it does in this sport-tourer. The saddlebags are roomy and very easy to operate and remove, and when taken off the bike, leave very little evidence that they were on in the first place. Its supermoto-like handling combines with daylong comfort to make it a great back-road companion with which you can readily cross the country. I averaged 6.7 L/100 km during my time with the bike, which included a fair amount of city riding, allowing me to cover about 340 km before needing to fill the 23-litre fuel tank. It makes a great sport-tourer that is lighter (205 kg dry) and more nimble than other bikes in its class, and although it’s somewhat pricey at $21,499, that’s about on par with an equally equipped BMW R1200RS, but with 50 more horsepower.

I do, however, have one gripe with the Super Duke GT, and that is that its brutish bottom end and nimble nature will almost surely coax you into a life
of urban hooliganism, which is unbecoming of a sport-touring bike – but quite welcome.