Missing out on the first scrambler era, BMW is making up for lost time by entering into the current trend

BMW has a storied history. In fact, the company celebrated its 100th birthday in 2016, tracing its beginnings as a maker of aircraft engines back to 1916. Its first motorcycle, the R32, was built in 1923, but despite producing motorcycles since that time, the company had skipped the original era of the scramblers – off-road bikes that first started appearing in the early 1960s. Back then, you could find high-piped, semi-knobbied scramblers like Honda CLs, Yamaha Big Bears, the Suzuki X6, and countless BSAs, cast-iron Harleys and pre-rebirth Triumph scramblers, among others. But you wouldn’t find a scrambler from BMW, at least not one produced at the factory. 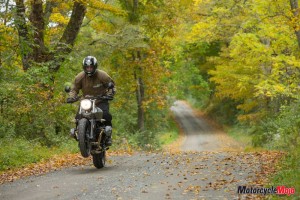 But the recent resurgence of the scrambler genre has proven popular, so it’s no surprise that this time around, BMW has such a bike in its lineup, the R nineT Scrambler, which we were invited to ride at its international launch in the countryside of New Jersey and in the hills of neighbouring Pennsylvania, as well as a quick romp in the traffic of New York City.

To get an idea of just how popular this new scrambler trend is, you just have to look at how many OEM versions are currently available. In addition to the R nineT Scrambler, there’s the Triumph Street Scrambler, the Ducati Scrambler, the Yamaha SCR950 and the Moto Guzzi V7 II Stornello, with probably more on the way. The R nineT Scrambler was the second model to be released in BMW’s “Heritage” collection, the first being the original R nineT introduced two years ago. More Heritage bikes have since been released, including the R nineT Racer, the Pure and the Urban G/S. The good news if you’re a potential Heritage bike buyer is that the Scrambler undercuts the R nineT by $2,600, at $14,250. Aside from being equipped with a conventional fork instead of the R nineT’s inverted unit, other cost-cutting measures include a steel fuel tank instead of one made of aluminum (the latter is a $1,175 option), cast wheels (tubeless spoke wheels are $520 more), and a simpler instrument cluster that displays just a speedometer. Curiously, the Scrambler has available traction control ($420), which isn’t an option on the R nineT roadster. If you want heated grips, you’ll have to dish out an extra $275.

True to the Style 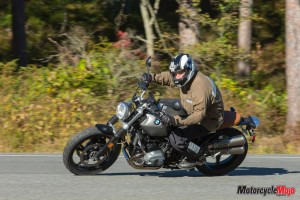 All of the Heritage bikes use BMW’s previous-generation 110 hp, 1,170 cc, air-cooled boxer twin. Although the Scrambler looks very similar to the original R nineT roadster, aside from the engine and headlight, the two bikes have little else in common. The Scrambler has a different frame with less aggressive steering geometry, and it also has longer suspension travel front and rear (125/140 mm vs. 120/120). Its front wheel measures 19 inches, compared with the roadster’s sportier 17 inches.

Just like that of its roadster brother, the Scrambler’s styling is understated and classic. Its exposed engine and mechanical nakedness hark back to the time when these kinds of bikes were authentic. There’s very little plastic on the bike, and subtle styling touches like fork gaiters and perforated muffler shields accentuate its retro design. A keen eye will notice that the muffler tips look strikingly similar to the outlets of SuperTrapp mufflers, a common exhaust system choice among dirt track motorcycles, which at one time weren’t too far detached from scramblers.

BMW’s minimalist approach with the R nineT Scrambler is deliberate; the bike is designed to be readily customizable by its owner, with an easily removable sub-frame, and a wiring harness that separates lighting from engine functions to facilitate the addition of accessories, like swapping out lights and such. BMW has a small array of accessories for the Scrambler, but it’s the aftermarket that will likely provide a plethora of bolt-ons for those wintertime projects.

Just like the R nineT, the Scrambler has a rich, growling exhaust note that is surprisingly robust for a stock machine. Clutch effort is light, and a very gentle flick of the shifter nudges the gearbox into first gear, with each successive gear change equally light. The riding position is typical of the genre, so it’s mostly upright with an easy reach to a wide handlebar, though the foot pegs are more naked-bike high than scrambler-like relaxed. I’d opt for the 12 mm-
taller seat (no extra cost) for the added legroom. The standard seat is more of a short-hop perch than a cross-country saddle; it’s flat, thinly padded and firm. It nonetheless proves tolerable for a couple of hours, especially if you’re primarily riding on winding roads like the surprisingly serpentine asphalt of New Jersey and Pennsylvania, where you’re not planted in one position for very long.

The Scrambler immediately distinguishes itself from the R nineT roadster at the first few revolutions of its wheels, however. Unlike the R nineT, which has light, neutral steering, the Scrambler has unusually heavy steering at low speeds, and it tends to resist leaning initially, before falling into a lean as you pitch it into a turn, thus causing you to counter your countersteering. This unusual handling can likely be traced to the Metzeler Karoo 3 dual-sport tires, which have an unusually flat rear profile. I suspect the tires, because I’ve felt these exact steering characteristics after replacing street tires with knobbier dual-sport rubber on other street bikes. The Scrambler comes standard with more street-oriented Metzeler Tourance tires; the Karoo 3s are a no-cost option.

At higher speeds, steering is more neutral and the bike is exceptionally stable. My biggest gripe with this machine, however, is with the suspension, which feels soft when you bounce on it, but proves extremely harsh over sharp bumps. It’s firm enough to provide very good control at a quick pace on smooth pavement, but bounces you off the seat and jolts your hands on the bars over frost heaves and potholes. This is especially unnerving if wannabe scramblerists decide to take this BMW off-roading. Probably like the original scramblers, it’s just not designed to handle anything more than smooth, hard-packed dirt roads – anything else and you must either slow down considerably or pick your lines carefully to avoid dips, ruts, rocks or any other off-road obstacles. This isn’t the case with the BMW alone; all modern scramblers I’ve ridden are primarily road bikes, and they handle like road bikes on dirt. There’s a reason the Japanese invented the dirtbike 40-odd years ago, probably because scramblers didn’t work that well off road. If the unpaved road is hard packed and smooth, however, the Scrambler rails along, and with the traction control off, you can slide the rear end out at will. The engine has that typical boxer power band we’ve become accustomed to: it’s wide and flat, and it pulls with gratifying force even high into the rev range, which means shifting is optional if you so desire.

A quick trip through the Bronx and Brooklyn during rush hour reveals that an urban setting is the Scrambler’s true playground. In a sprawling city teeming with busy traffic, it easily squeezes its way through the worst congestion, its wide handlebar and low centre of gravity making tight turns and quick, evasive manoeuvres a breeze.

The BMW R nineT Scrambler should help broaden the appeal of BMW’s retro bikes, especially since it’s priced considerably lower than the roadster. You shouldn’t have aspirations of strapping on a knapsack and hitting the trails, though, since this bike, like the entire scrambler phenomenon, is a fashion statement. But that doesn’t detract from the Scrambler’s most redeeming features: It’s fun to ride, it’s fun to look at, and when you put it away during those winter months, it’ll be fun to work on, too.