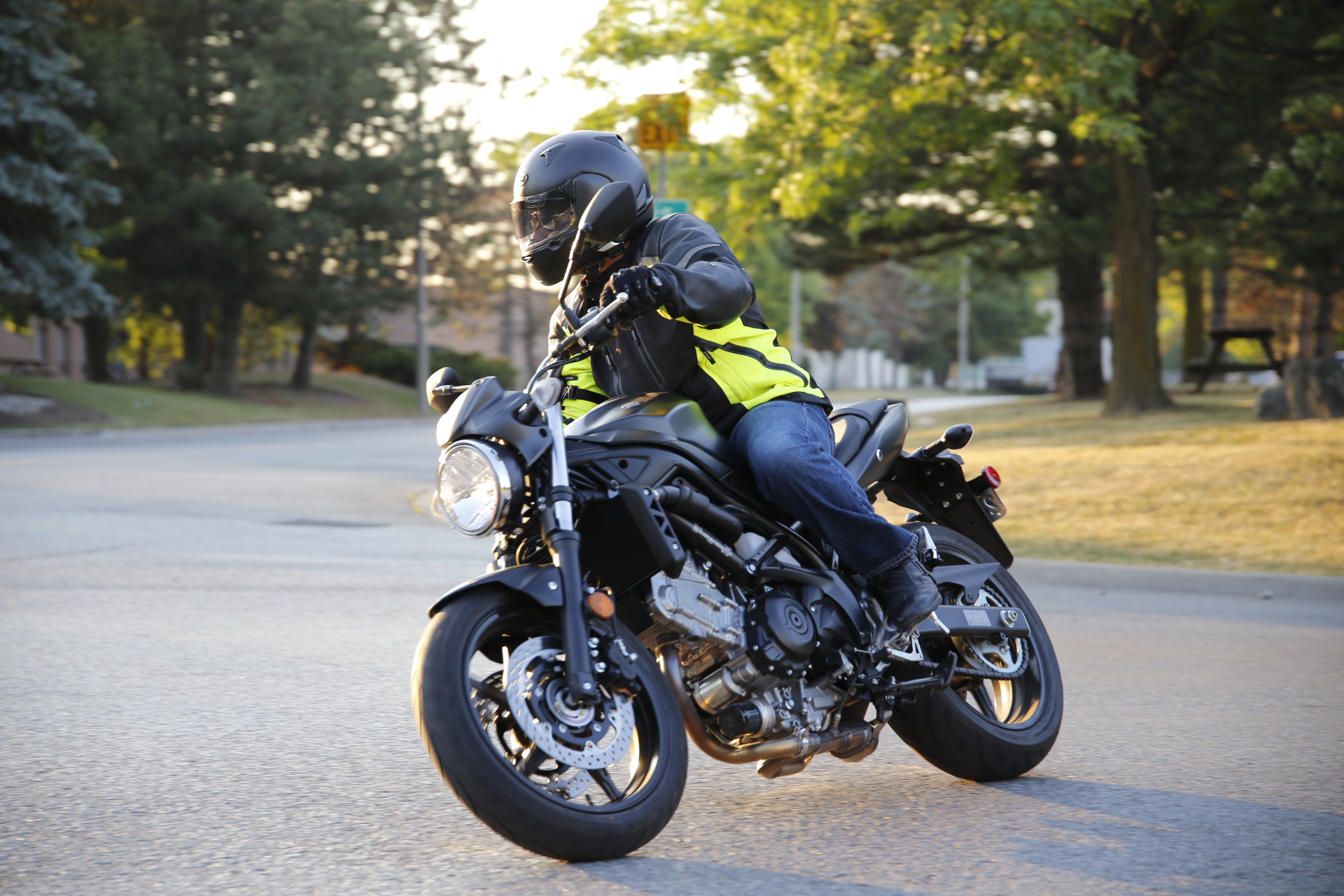 If there were a yardstick in the motorcycle industry, it would look like this

Welcome back! Or maybe that should be, hello again. No, I know: glad-ius to meet you!
No matter how we split those hairs, it’s good to see the SV650 is back in business and ready to represent Suzuki in the segment where it was once so competitive. Formerly known as midsize motorcycles, they are now found under labels such as standards, sport standards, streetfighters, scramblers, classics, retros, desert sleds, adventure bikes and, let’s not forget, café racers. All are valid categories into which you could shoehorn a platform such as the SV650’s, with the right bolt-ons. 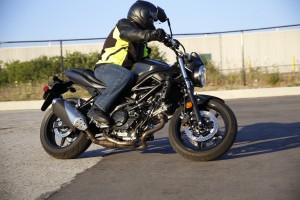 This is the Baskin-Robbins era of motorcycling, where the number of choices seems as infinite as those 31 flavours did to my adolescent mind. Endless subdivisions aside, the glut of quality bikes makes for good magazine content – the challenge, of course, being how to accurately convey the character and quality of so many similar models on a scale that has some quantitative properties.

To that end, I propose that the SV650 has been the yardstick against which the majority of modern members of the segment(s) can be measured, and in support of that theory, I’d like to take you back to 1999 for the introduction of the first SV650. This trip down memory lane reveals a bike with a 645 cc, liquid-cooled, eight-valve, DOHC, 90-degree V-twin in a narrow chassis that rode on a 41 mm traditional Kayaba (now KYB) preload adjustable front fork and a non-adjustable Kayaba rear shock. It had two-piston Tokico calipers and 290 mm floating rotors at the front, and a single-piston caliper squeezing a 240 mm rotor out back. This is all going to sound very familiar when you reference the included spec sheet for the 2017 SV650A, because those are the same specs as the current model, save for the rear suspension now being adjustable for preload, while the front is no longer. The new model does produce a few more horsepower, what with its dual-spark engine, revised internals, freer-flowing exhaust and electronic fuel injection. To be fair, though, most of those changes were made to the platform over the intervening 17 model years, not exclusively for this 2017 iteration. In actuality, the outgoing Gladius is the predecessor to this new bike, as it’s the one that got the majority of upgrades when it split off from the SV-DL family tree – upgrades that SV fans had long been hoping for, but which instead went to the Gladius line.

At the time of the original SV’s launch, the main competition were smaller parallel twins, possessing less sporting intent, with one notable exception: the Ducati Monster, a bike that was very obviously an inspiration for the appearance of both the original and current SV.

Given that the Suzuki’s design concept remains almost completely unaltered from its original state some two decades ago, I think we can qualify it as a near constant in the segment, and can therefore say, with some confidence, that it is a good barometer. Now, that’s not saying there aren’t bikes capable of hurdling the Suzuki’s mark; we’ve already mentioned the Ducati Monster, which gets higher aesthetic scores and certainly feels sportier, but it has seen more reformatting than a floppy disc, both in form and function – I think somewhere along the line Monster got confused with Scrambler, but I digress. Then there’s the FZ-07, a bike that recently came out of nowhere and continues to occupy the sharp end of its class in terms of value, fun and performance. The question now is, does the returning SV live up to its heritage, and is it still the same door frame onto which we can scribe the heights of its competitors? I would answer simply, yes!

The controls are, as ever, light and easy to use. The bar, neither too narrow nor too broad, the levers always at hand, the pegs right where they should be, and the shifter lever and brake pedal placed where few could object. The new LCD gauge pod is a welcome addition, and helps to dress up an otherwise sparse view from a cockpit that’s a pleasure to spend time in, thanks in part to a comfortable and not too firm seat. The lack of wind protection means sustained highway speeds will help to develop upper body strength, the extent to which is completely dependent on your preferred pace. The bonus with most naked bikes is a fairly smooth airflow that’s not likely to induce buffeting of the chest or helmet.

Going into my test of this 2017 model, I had a lot of preconceived notions based on years of riding the SV, DL and Gladius, and, given the similar
specs of the new bike, they were, unsurprisingly, well founded. Handling is a hallmark of the platform, and this SV, at 197 kg ready to ride, doesn’t disappoint, showing off its 8 kg weight loss over the Gladius and its improved suspension tuning compared with previous generations. Despite the front fork’s lack of adjustment and the rear’s basic preload clicker, it felt firm at a sane road-going pace, yet plush enough to tackle the often patchy and pitted surfaces in and around any metropolis. 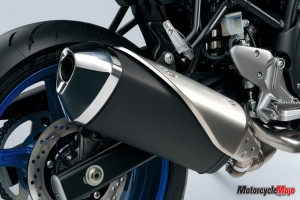 The narrow feel of the “all-new trellis frame” (Gladius owners may argue that) is made possible by that compact V-twin and an effort to reduce the width of the bike’s waistline where the seat and tank meet. I’d guess that even a person with an inseam of 29 inches – or slightly less – could still manage to get both feet fairly flat on the ground at a stop. More importantly, the compact nature of the bike makes it less intimidating to newer riders and allows advanced pilots to absolutely manhandle the SV when riding hard. It’s no coincidence the SV has competed on just about every road course in the world since its inception, and remains a favourite choice of track day enthusiasts.

So what is the big attraction to this rather unassuming motorcycle? In my case, it’s the V-twin engine that doles out 75 hp and 47 ft-lb of torque with almost perfect fuelling and throttle response, thanks in no small part to the Suzuki Dual Throttle Valve. While peak output of both figures occurs at over 8,000 rpm, it’s the pull at lower rpm that makes you think you’re opening the throttle on a much larger mill. Improvements to the engine for 2017 include more than 60 new components that boost efficiency and power (again, Gladius owners may object) – and of course there are those pesky Euro 4 emissions standards to comply with. It all adds up to an incredibly fun and flexible powerplant, not to mention it sounds decent in stock trim. But put a good aftermarket exhaust on and owners will be treated to the rumble of rolling thunder at the behest of their right hand – and an even more willing response at the rear wheel. Speaking of response at the rear wheel, Suzuki has now equipped the new SV650A with a close-ratio six-speed gearbox that allows the rider to squeeze every one of those 47 ft-lb for all they’re worth. Suzuki has also included its Low RPM Assist, which we had previously sampled on the GSX-S1000F. It elevates the rpm when the clutch is being released to assist with pulling away from a stop. To be honest, neither the GSX-S family nor this bike needs any help getting off the line, but it does help to prevent those embarrassing moments of inattention at a stoplight where your hamfistedness is on display for all to see.

During the two weeks I spent with the new SV, I found myself thinking of items I would change, with the first being the aforementioned stock exhaust, while the second would be the brake pads. Those calipers were – and still are – capable, but they’re not as capable as others in the Suzuki lineup, and a pad that gives a little more initial bite and feel would be welcome. And, since we’re talking about hypotheticals, perhaps some sportier suspension components could be borrowed if the resurrection sees some success. I think they’d look right at home on a partly faired S-variant or perhaps a café racer – France already has an exclusive SV650 Scrambler, and who doesn’t like more flavours these days? Some may even recall it was Canada that first received the S model all those years ago, to the outrage of American buyers. But that’s another story.

Much of the variety among the SV’s competitors comes down to personalization rather than performance – image over substance, really. So, I go back to this idea of meaningful measurement for the sake of our readers. I’m proposing we strip away the toppings and talk about what I measure against this yardstick. In my mind, it includes current models retailing under $10,000 and with a displacement under 900 cc, and that’s pretty much it. That rules out the sport bikes, the specialized adventure bikes, most – but not all – cruisers and a good chunk of the models that are simply stylized versions of a base model. There are a couple of exceptions from Europe that suffer from poor exchange rates at the moment, so perhaps a little leeway should be given on the sticker price, but I think you get where I’m coming from. You can try this metric for yourself whenever the conversation among a group of fellow riders turns into a comparison of models – trust me, you won’t have to wait long!

The SV family is much like par at a golf course: You strive for it, but seldom succeed, and the few instances where it’s bettered are usually more than offset by acute failure in other areas. Having ridden at least one generation of this platform should be considered a prerequisite to having your motorcycling handicap established, so if you haven’t, go borrow a friend’s. And for those of you who have ridden an SV650, I would encourage you to take a ride on the 2017 SV650A – I think you’ll find a more refined, though familiar, experience.