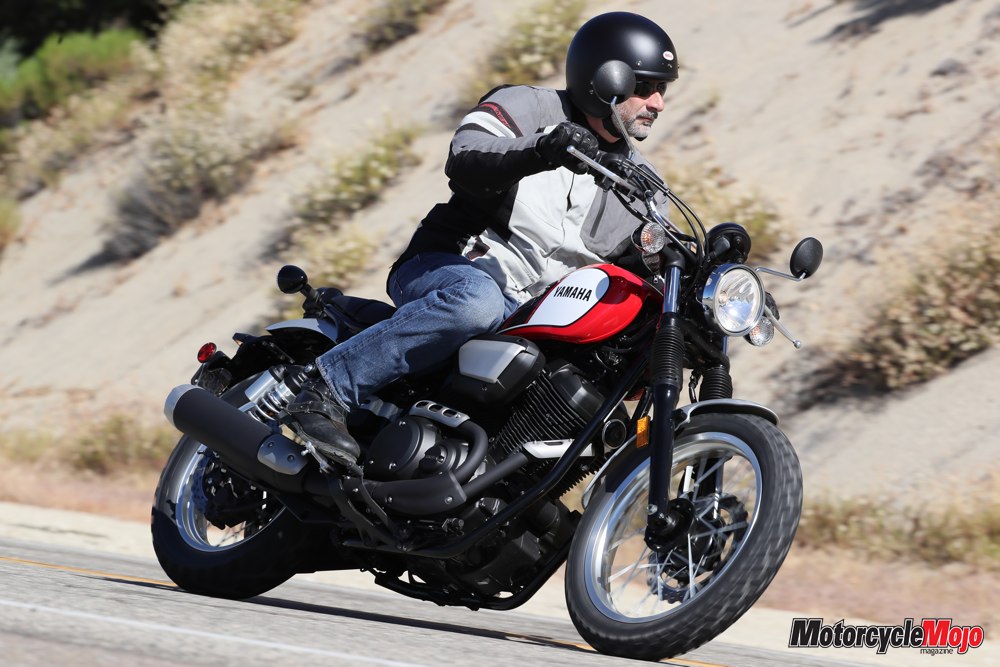 With inspired design from the scramblers of yore, this retro might be better sticking to hard-packed roads

Where’s a trend these days for bike makers to introduce a motorcycle, and then use it as a platform from which to spawn several different models. This makes a lot of sense from the manufacturer’s point of view, because it simplifies production and reduces costs. It also makes sense from a consumer’s point of view, because it offers several styling variations of a certain bike – if you’re not too keen on the styling of Model X, maybe Model Y will strike your fancy. An ideal example of this formula is the Yamaha Bolt. Initially introduced as a low-slung retro cruiser, it was soon also available in the slightly sportier Bolt R-Spec with piggyback shocks and cast wheels, and the sportier still Bolt C-Spec with taller suspension, and a seat cowl and low handlebar giving it a café-racer silhouette. 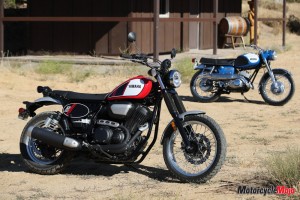 For 2017, Yamaha has taken the Bolt platform in yet another retro direction, and it’s the most radical yet. It has been “scramblerized.” Yes, the Bolt has joined the likes of the BMW R nineT Scrambler, the Ducati Scrambler, the Moto Guzzi V7 Stornello, and the mother of all modern scramblers, the Triumph Scrambler, as a modern take on, well, the scrambler. And while the three previous incarnations of this cruiser kept the Bolt name, this latest one is simply called the SCR950. 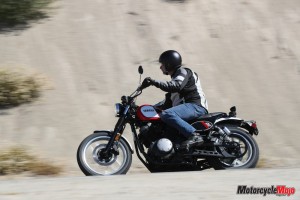 There’s no mistaking the SCR950’s family resemblance to the Bolt, but its profile has been completely altered by the use of both new and existing components. Among the new components are a redesigned sub-frame, which provides a taller seat height (830 mm, a full 140 mm taller than the Bolt’s), and a long, straight seat. Also new is the 17-inch rear wheel, which replaces the Bolt’s 16-incher. Yamaha sourced the shocks from the Bolt C-Spec, which are a bit longer than the Bolt’s for added ground and cornering clearance, while some of the other retro styling touches include side covers that mimic number plates, and fork gaiters (those are rubber fork boots, if you weren’t around when the original scramblers were trailing about).

Swing a leg over the SCR950 and you’ll discover a very scrambler-like seating position, with an easy reach to the tall, wide handlebar placing you comfortably upright, and mid-mounted foot pegs providing a neutral riding position. The seat is straight, but it’s not flat with a rounded cross-section that doesn’t really spread the load equally on your backside. If anything, it actually feels like a dirtbike seat, which lets you move fore and aft easily, but it’s firm – comfy for about 45 minutes or so. The large, round instrument cluster is also from the Bolt C-Spec and has a small LCD display that shows speed, and either the trip meter, odometer or time. This is one item I’d really like to see offered as a simple analogue unit, both for appearance and to maintain the retro feel of the machine.

Just to Be Clear 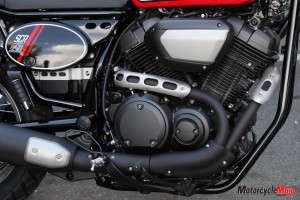 Now, to get things straight, here’s what the SCR950 is: It’s a cleverly styled retro bike that’s faithful to the original spirit of the scrambler genre, in that Yamaha modified an existing model with a wide handlebar, knobbier tires and an upswept exhaust pipe (all right, it’s not quite a high-mounted exhaust, but the idea is there).

Here’s what the SCR950 is not: It is not, by any means, a dirtbike. It is no more competent when riding off pavement than any true street bike would be. The only thing that makes it handle a bit better than an outright street bike when the pavement ends is the addition of the more aggressive Bridgestone Trail Wing tires, as well as its upright riding position and wide handlebar.

You’re reminded that the SCR950 is based on a cruiser platform as soon as you start riding at a moderately aggressive pace on pavement, where you soon discover it has limited cornering clearance, as its foot peg feelers touch ground at modest lean angles. Limited cornering clearance notwithstanding, the SCR950 shines on the road, with light, neutral steering and a very wide, flat power band. In fact, there’s nothing intimidating about its 942 cc air-cooled V-twin, which has five speeds and claims 51.3 hp and 59 ft-lb of peak torque at just 3,000 rpm. The gearbox and clutch action are smooth, light and very beginner-friendly.

Take a turn off-road, though, and you’ll uncover the bike’s real limitations, as the rear suspension often bottoms after hitting even modest bumps at speed. And it bottoms hard after landing from any kind of jump. If you see any promotional pictures of the SCR950 mid-air, you can be assured that the landings were hard. Even standing up to help absorb bumps feels awkward, since the foot pegs are spaced unusually wide. The bike has a relatively narrow steering lock, so tight manoeuvres, like U-turns in the trails, require a bit of backing up.

Look at the spec sheet and you’ll understand the SCR950’s limited handling capability on and off the pavement. Its chassis and steering geometry are identical to the Bolt’s; the suspension components are straight from the Bolt, using the same springs but reworked damping in the forks; while the longer C-Spec shocks also have revised damping but offer the same wheel travel as for the Bolt, which is a very scant and cruiser-like 70 mm.

The $10,199 Yamaha SCR950 is really a styling exercise, but admittedly it’s a very good one. It certainly looks the part of the scrambler, but like most modern scramblers, it should be limited to adventures in an urban setting. And if you do venture off pavement, you should stick to well-maintained dirt roads, where it’s actually a joy to ride. It’s definitely my favourite iteration of the Bolt, with roomier ergonomics, and it’s fun to ride if you don’t have expectations of traversing the country along remote, unmaintained trails. It’s not a bike you should pack your camping gear on for a weekend romp in the deep woods, because chances are it’ll be a long hike back.

Now should Yamaha ever consider using the FZ-07 platform to produce an SCR07 – now there’s a scrambler I think would be ready for some real adventure.