It didn’t take long to say yes after receiving a personal invitation to coach at the world’s only privately owned, personal racetrack

When Alan Wilzig’s girlfriend, Clemence, wanted to learn how to ride a motorcycle, he posted on his Facebook page, “Time to get resident fast girl Misti Hurst out to coach Clem.” I nearly fell off my chair. It’s not every day you get an invite to fly to New York state to coach on a privately owned racetrack. I couldn’t type y-e-s fast enough. 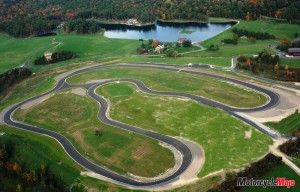 With a date set for mid-September, I began researching more about Wilzig’s property.
Wilzig Racing Manor is the only privately owned, personal-use grand prix-style road racing facility in the world, according to his website, alanmoto.com. Completed in 2011 at a cost of $7.5 million, the track is 1.8 km long and 12.2 metres wide, and boasts nine turns winding through more than 24 metres of elevation change. Included is a 20-degree banked turn, suggested by moto guru Keith Code, who helped design aspects of the unique circuit.
“Do you have a bike preference?” Wilzig, former CEO, president and chairman of the Trust Company of New Jersey, asked. “I have a GSXR 600, unless you want to ride the KTM 390?”
“I’ll try the 390.” I said, happy to just ride the exclusive track. I would have ridden anything.

From Zero to Racer 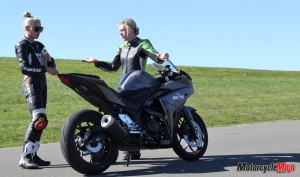 I could hardly contain my excitement as I flew from Vancouver to Newark, New Jersey, then to Albany, N.Y. Peter Huber, Wilzig Racing Manor’s general manager and director of motorsports, picked me up at the airport, and as we drove through the gorgeous countryside, we talked motorcycle riding, technique, track days, racing and coaching. He filled me in on how he had handled Clemence’s novice training, bringing her from zero (not having ever ridden a bike in her life) to being able to competently get around the track.
What a way to begin your riding career, I thought. Being taught by your own California Superbike School coach on an empty, private racetrack in your backyard.
Turning off the main road onto Wilzig’s street, I could never have imagined what was to come. At the end of the dirt road was a large electronic gate. The gate opened to reveal a paved driveway leading up to a modest-looking light yellow farmhouse. The house fit perfectly into the surrounding green countryside, with just a Yamaha YXZ1000R and a Polaris RZR1000 hinting at what lavish toys might be lurking around the property.

I was expecting a huge, modern mansion to be towering over the facility; after all, Wilzig does drive his bright green McLaren, painted like the Incredible Hulk, into the small town of Craryville to get his groceries. But I was pleasantly surprised to find that the 100-year-old-plus farmhouse was considered their main “weekend” residence. Dubbed the “yellow house,” it was gorgeous, with stunning, refinished original hardwood floors, a subtle outdoor pool that blended into the surrounding wooden deck, and luscious greenery outside every window. To one side was a 15-acre shimmering blue lake lined with personal watercraft and other water toys for warm-weather days. Sitting lakeside was the “other house,” a large, beautiful barn with high ceilings, rustic wooden beams, large windows, dark floors, and an open and very natural decor with ropes, wood and minimalist styling. The view was spectacular, and peaceful.

To the other side of the yellow house, perched on the hilltop, I got my first glimpse of the outer edges of the racetrack. Imagine a racetrack outside your window! I felt envy creeping in and couldn’t wait to try it the following morning. 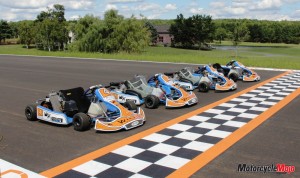 Suddenly the door to the yellow house swung open, and in a jumble of energy, Wilzig invited me in. He gave me a big hug, poured me a glass of juice and began searing some meat on the stove. In a blur of steam, hand gestures and the chaotic pouring of ingredients,
he chatted enthusiastically about all manner of subjects.
“Extraordinarily,” he reminded me, “in 2006, my sixth year on a sport bike, it was in fact you, Misti, who helped me get my knee down for the first time!”
I knew I had been his coach at one of the California Superbike Schools, but had forgotten the exact details. “It was Barber Motorsports Park,” he said. “You helped refine everything about my track riding!”

Wildly, he placed several slices of piping hot tender beef on the plate and continued to bounce around the kitchen, talking until Clem came downstairs. We chatted for a few more hours until it was time for bed.
I was up early the next morning, but there was not a trace of anyone else, so I made some coffee and sat on the front porch, watching the mist roll by on the lakefront. I listened to the silence and daydreamed about having my own gazillion bucks and all my own high-speed moto toys.

A Guy’s Gotta Have Toys 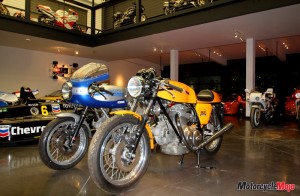 After a while of waiting, I sent Huber a text, and suddenly he was at the door and we were off to see the museum. Directly across from the yellow house was a large, modern building that also blended seamlessly into the landscape. As soon as we walked in and passed the multi-bay service area, I apologized for acting like a star-struck tourist and pulled out my camera to snap shots of the dozens of motorcycles and cars that lined the immaculate halls.
Wilzig has more than 100 cars, motorcycles, off-road vehicles and karts in his arsenal, including a terrific Ducati collection of 20 from a 1974 750 Sport (winner of the 2008 National Ducati Superbike Concorso), all the way through to a 2008 Paul Smart replica.

Wilzig’s own creation, the 2003 Ducati / MV Agusta Faberge Egg bike, combines what he considers the very best looks and mechanicals of the illustrious career of Massimo Tamburini, “One of the three founders of Bimota, as well as a legend!” he told me.

The oldest bike he owns is a 1946 Motom: “The only motorbike with pedals in my collection!” he said with a laugh.

He still owns the very first bike he ever purchased, a Suzuki DR350, and every bike since then (a Suzuki Bandit 400 and so on and so on …).

As for his newest bikes, they are the pair of 2013 GSXR 600s that Wilzig takes great pride in, having been awarded them in light of both his unbridled enthusiasm and his more than 25-year as a Suzuki owner.

Wilzig also owns what he touts as “The biggest and best Bimota collection in the U.S., including the 1975 SB1 (first Bimota ever), unti the ill-fated 500 cc 2000 V Due that killed the company.”

We then went into the café and selected some iced coffee from the bar fridge before wandering past the gear room, where rows and rows of helmets lined the wall, dozens of leathers and riding gear hung neatly, and boots sat on the shelves. I couldn’t even fathom the amount of toys that were in that building. It’s literally like the most fun place in the world.

The Coach and the Student

Clem arrived at the museum around 11 a.m. and got ready to begin her coaching sessions. Huber and Wilzig were on hand to bring us whatever we needed – chairs, pens, paper, water, coffee, blankets (it was cold!).

First we worked on a steering exercise. “To make the bike go left, press the left bar; to make it go right, press the right,” I instructed. “To make it more efficient, press forward and not down to get the bike to turn quicker with less effort.”

From there, we tackled proper throttle control, as taught by Keith Code. “Once the bike is turned, the gas is rolled on smoothly, evenly and constantly throughout the remainder of the turn.” This is where a lightbulb went off for her.

Being Coached Instead of Being Taught

She said that before we did our steering drill, when she rode she sort of just leaned and used her body to try to steer the bike (she was still counter-steering without realizing it), and therefore never had an accurate understanding of when the steering action was complete or how quickly she could get it done. Without that understanding, she never knew when to roll on the gas, or exactly how much. Her lines and her overall riding improved tremendously after just the first session. She was proving to be a good student.

Then we tackled lines, good turning points and getting the bike to turned quicker. As her pace picked up, we did an exercise in locking her outside knee into the tank and moving her body to the inside of the corner. Suddenly (without even trying), she was looking the part and riding well, too.

The track was super-fun, and the nimble little KTM 390 was the perfect bike to be leading and following my student on her Yamaha R3. Overall, it’s a technical course with some tricky turns. My favourite corner was probably the banking – it reminded me of the bowl at Streets of Willow Springs near Rosamond, California, which offered a fast entry corner and felt as though it pressed you into the pavement before sending you firing out like a slingshot.

There is a long 180-degree turn that leads into a series of fast esses (another one of Code’s suggestions) that started off as Clem’s worst corner, but after a few adjustments, quickly became one of her favourites. There is also a blind uphill series that requires an impeccable turn-in point. The last corner before the front straight is a downhill decreasing radius that can catch you out if you’re not careful.

Two Tracks in One

The track is bidirectional with a few different configurations, so it’s really like having two racetracks in your backyard. I was planning on running the course the opposite direction with Clem but changed my mind, instead focusing on nailing down reference points and visual skills on the second day. I did, however, get a chance to ride it clockwise after our day was done, and preferred it that way. If there is a next time, and Clem hinted there would be, I’d start with that direction.
By the end of the second day of coaching, Clem was dragging her knee like a pro. “You’re the knee-dragging cherry popper!” Wilzig announced as he gave me a wicked high-five. “Watching Clem’s meteoric progress has been truly one of my great ‘moments’ in my motor-sports life,” he said. “First, Peter with her novice training, and then Misti came in, and by the end of day two . . . Wow!”

Later, Wilzig emailed me, saying, “All I can say is that I can’t wait till our next session together in the spring. At our final dinner before you flew home, I actually, with no hesitation, started laying out a timeline for spring and summer coaching to continue so that perhaps the young Miss can catch an end-of-season CCS race at New Jersey Motorsport Park.”

Everybody Should Have One

With my time winding down, Huber took me for a high-speed zip in the Yamaha YWZ1000R around the 275-acre property, wailing through the narrow trails, around the lake, past a waterfall, past the “tree house” observation deck and stopping at the highest point. It was sunset, and as I stood on the roof of the side-by-side, I was greeted with a stunning 360-degree view. The sky was pink and purple, the lake shining in the distance and the racetrack like a ribbon of silver-grey. This really is the perfect place to live, I thought. I want a racetrack, too.