Atlantic Canada’s premier motorcycle rally, Atlanticade, reached an important milestone in 2016 under perfect blue skies and warm temperatures. The rally celebrated its 10th anniversary and is showing no signs of slowing down any time soon. Started in Moncton, N.B., in 2007 by a handful of volunteers who form the rally’s executive committee, Atlanticade continues to grow year after year, thanks to the hard work by that small group of dedicated people. In fact, Dale Hicks, the committee chair, told me that planning for the 2017
Atlanticade started during the 2016 event. 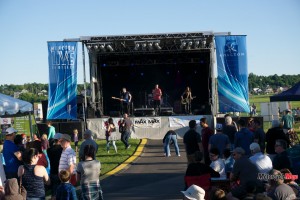 Part of the rally’s success is not only the hospitality and friendliness of the Maritime people, but also its excellent location. The Maritime provinces are a first-class destination for motorcyclists from the northeastern part of the continent, and beyond. Plates were spotted at the 2016 rally from seven provinces and eight states – from as far away as Alberta and Washington state. Riders will take in the 2017 Atlanticade festivities this year from June 22 to 25 while exploring New Brunswick, Prince Edward Island, Nova Scotia and Newfoundland and Labrador. 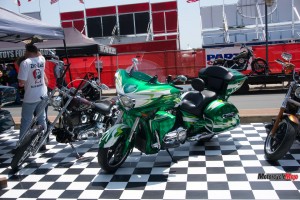 Atlanticade started in Moncton in 2007, calling the city home for the first few years before moving south to St. Andrews in 2010, and then across the Northumberland Strait to Summerside, PEI, in 2012, before relocating back to Moncton in 2015. Of course, volunteers are a special group of people, and there aren’t any more dedicated than the Christian Motorcyclists Association, which has helped with traffic and parking duties at every Atlanticade for the past 10 years, regardless of which town the rally has called home. Super Dave and his CMA team move in like a machine to keep order of the thousands of bikes on the move. 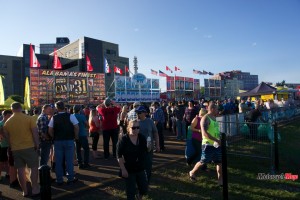 The bulk of the rally takes place in downtown Moncton, but there are a number of things to do at any given time during the four days that Atlanticade runs; there are guided tours, poker runs, bike shows, downtown street parties with live bands on the main stage, burnout competitions, beard and tattoo contests and much more. And if that weren’t enough, when you’re feeling a little peckish or just need a full-blown barbecue, there is a licensed ribfest and live music that also takes place on the Atlanticade festival grounds. Also, new this year is the Ride for Dad prostate cancer ride that will be wrapping up Atlanticade on Sunday afternoon.

Are You Feeling Lucky?

For the 2017 rally, the Atlantic Canada Kawasaki dealers all pitched in and have offered a 2017 Vulcan 900 Classic LT as a grand prize to one luckyregistered participant. The draw will take place on Saturday night in front of Moncton’s city hall. Be sure to check out atlanticade.ca on how you can enter.

During your summer’s tour through the Maritimes this year, plan to be in Moncton June 22 to 25th so you can attend the four-day Atlanticade rally. You won’t be disappointed.