RawHyde Adventures’ ranch is like Disney World for adventure motorcyclists

I was most intrigued with the road that served as the driveway into RawHyde Adventures’ camp. Even though we were in a van at the time, I thought that if this is indicative of what’s to come, then we should have an amazing next few days. Turning off the abandoned old Golden State Highway onto the severely broken pavement of a 1.5 km potholed single-lane driveway with plenty of blind corners and elevation changes led us into the RawHyde 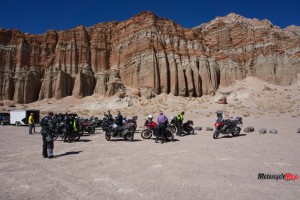 Adventures training property. A kilometre later, we started to see some training paddocks and various other signs of the RawHyde camp, and we eventually arrived at the camp’s home base, which consisted of a number of storage trailers, and permanent structures, including large tents built on platforms that would serve as sleeping quarters for most of the course’s students. Under the shade of camouflaged netting sat more than 30 school-owned BMWs – mostly 1200GSs, with a few 800GSs and a 650GS or two thrown in the mix for variety, all available to rent for the course.

RawHyde Adventures began in 2002, when owner Jim Hyde planned an eight-day, 1,600 km off-road adventure ride from Los Angeles to Las Vegas, and in only two short years, his dream had morphed into the number one enduro course in the United States. Today, RawHyde Adventures is an official BMW training centre, and therefore trains exclusively based on BMW’s prescribed off-road curriculum.

Earlier in the year, Motorcycle Mojo ran a contest in conjunction with RawHyde Adventures operating out of Castaic Lake State Park, California, some 80 km north from the heart of Los Angeles. Far from the overpopulation of sprawling L.A., this 120 acres of desert-like property seemed like an ideal place to have a permanent off-road training centre. The muted brown landscape of sandy hills and the surrounding mountains with pale green flora reminded me very much of the Kamloops area in British Columbia’s southern Interior.

I was travelling with the contest winner, Steve Hubley. We had met for the first time at Toronto’s Pearson International Airport prior to getting on our flight to Burbank. When meeting someone for the first time and knowing you’ll be spending a number of days together, a lot can wrong, like personality conflicts, but any anxiety that may have been present was quickly swept under the rug. Steve is a great guy and we immediately got along. 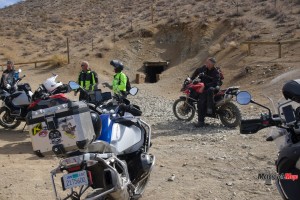 After dumping our gear bags, Lauren, the “mama bear” with an infectious, positive personality who was overseeing administration of the students, gave Steve and me a tour of the facilities that included the sleeping quarters, offices, kitchen, dining room, bar and shower area. We were then set free to pass the time however we chose. While I was wandering around the property, I heard a voice call out, “Are you a guest or do you work here?” I began speaking with fellow guest Julious as he unloaded his 800GS from the back of his van when a resident horse sauntered up and sniffed me from head to toe, looking for a handout, no doubt. I rubbed his nose just as four black cows also sauntered past, glancing at us. We were told later during introductions in the bar that the domestic animals are familiar with humans and motorcycles and won’t move out of the way, so you must go around them. We were also informed that on the property is a big mountain lion, a black bear that is more scared of you than you are of him, white scorpions and rarely seen rattlesnakes, so it’s best to wear boots.

Sitting in the bar on the first night, we met our coaches as they went over the details of what we could expect during the next few days, and guests introduced themselves before moving into the dining room. The chefs at the RawHyde ranch are Cordon Bleu-trained, and if the salmon on the first night was any indication of what the food would be like for the next few days, thoughts of putting on a few pounds superseded any concerns of going hungry.
There were two groups of 13 taking part in the two-day Level 1 Intro to Adventure camp. A handful of us, Steve and me included, would stay on for two more days to participate in Base Camp Alpha – a ride through the Mojave Desert, with desert camping at the end of the first day. 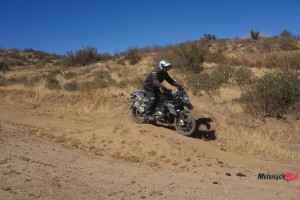 Jim Hyde was away riding in South America, so coach Travis was the main speaker during the first day’s morning orientation, but it seemed that in no time we were on our bikes performing braking exercises, slow-speed manoeuvres and counter-weighting to turn the bike. BMW’s curriculum is laid out like building blocks so that when the Level 1 course is completed, you have most of the skills to tackle many types of terrain.
After an excellent lunch, we tackled tight turns around pylons and then slow-speed turning exercises through trees on a hillside. The 1200GS is a big bike for the inexperienced in this scenario, and quite a few bikes went down, including mine, but no damage was done. Serious damage to a bike is the responsibility of the rider, but scratches are free, and expected, and given the windshields and mirrors have been removed, and the turn signals have been unbolted and zip-tied to the bodywork, not much damage could occur. All bikes are equipped with crash bars, bash plates and the regular protective equipment.

We knocked off about 4:30 on the first day, and since there isn’t a bartender at RawHyde, the drinks are free after training. A wide variety of cold beer was very welcomed to wash down the desert dust.
Coffee at six, breakfast at seven and be ready to ride at 8:30 was our final instruction for the following day.

Slow-speed manoeuvres again began the day. While the BMW 1200GS is an amazing-handling bike, it is heavy, and you must keep in mind that it isn’t a small dual sport, so throwing it around really isn’t an option. It’s best to learn how to ride it slowly, which is emphasized in the BMW curriculum. I’ve always said that a monkey can ride a motorcycle at speed, but it takes skill and practise to ride a motorcycle slowly. If speed is your thing, it will come after learning the basics in what feels like slow motion sometimes.

Heading up the mountain on the RawHyde property taught us a wealth of different riding techniques, the most important of which was accelerating uphill on a loose surface and braking on a loose downhill surface.
The RawHyde property has a varied array of dirt landscapes, including deep sand, steep hills, trees and tight single track, all of which we sampled during the two-day intro course. Unfortunately, due to the geography and a multi-year drought, there aren’t any water crossings or mud to play in.

Steve has a number of years of riding under his belt and was doing really well in the dirt – until he had a less-than-graceful dismount. I was in front of him, though, and didn’t see what happened. We were on a series of large whoops, which might have been about two metres high. I just heard an engine rev up behind me and I had a feeling it wasn’t going to be good. I immediately pulled off the trail and ran back to find Steve flat on his back with his 1200GS beside him pointing in the opposite direction that we had been travelling. A rider who did witness his accident said that as Steve was coming up the last whoop, he accelerated, launching the big bike in the air; both Steve and the bike settled on the ground beside the whoop. When I later talked to Steve, he wasn’t sure what happened. Luckily, one of the coaches teaching the other group was a paramedic and came to assess the situation. Once it was determined Steve was okay, the coach rode him back to camp. Lauren took him to the hospital to get checked out and, thankfully, in the end Steve was just very sore. 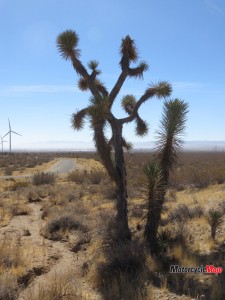 The next two days were spent on the road or on mostly sand trails riding into the Mojave Desert north of Trona, between Death Valley National Park and Sequoia National Park.
There were 11 riders for Base Camp Alpha, including coaches Wil and Chris. A chase truck, driven by Phil, the resident fix-anything MacGyver-type, took our tents and bedding, along with Steve, who was too sore to ride. They would take regular roads and meet us at the camp. We were glad to hear that our quality of food wouldn’t suffer, as chefs Kenny and Giuseppe would also meet us there.
We left the RawHyde ranch early, and with light clothing on and jacket vents still open from the day before, nobody was prepared for the temperature at only 10 C. But we knew it would warm up as the day went on. There are wide temperature fluctuations in the desert – night can become quite cold, while daytime temps can rise dramatically.

Although the official training days had ended, the coaches on the Base Camp Alpha trip were quick to give advice on the variety of real-world terrain we encountered.

I always find it exhilarating seeing fighter jets overhead, and given we were riding beside Naval Air Weapons Station China Lake, we had many chances to see and hear F/A-18 Super Hornets and F-22 Raptors, including one low-level flight of a Super Hornet coming straight toward us. I didn’t see or hear the plane until it was on us, and once it passed over, the sound from its jet engines was unbelievable. The riding was amazing, but seeing that made my day – and made me glad we weren’t the enemy.

Even though Base Camp Alpha is set in the desert with no modern amenities, the food was just as delicious as it was at the ranch, and the large campfire at night finished off an excellent day of riding. And with absolutely no light pollution, the stars and the Milky Way were spectacular.

Back to the Ranch

We had three riders who were struggling in the sand, so our group split up. They followed the chase truck to lunch at Jawbone Canyon, while the remaining eight of us took sand trails. It was decided that the afternoon ride back to the ranch would be some pretty intense riding over a mountain pass on sketchy trails with no guard rails, so the same three continued on with the chase truck back to the ranch.

That afternoon’s riding was the most epic I have ever done. Not only was the off-road riding over the mountain pass fast and adrenaline-charged, the pavement of the Caliente Bodfish Road, most of which is barely a thread width on a map, was a continuous series of high-speed mountain turns and switchbacks that I could only dream of having close to where I live.

The whole Base Camp Alpha trip took us several hundred kilometres each day over sandy and rocky mountain passes and desert trails to abandoned gold mines and through ghost towns with some of the best riding I’ve ever experienced.

The RawHyde Adventures camp is a top-notch training facility with 120 acres of the most varied terrain you could imagine. Most of the staff eat and sleep at the ranch, which makes for a close-knit group with no end to the camaraderie.

Who says you can get bored doing things over and over again? Everything about RawHyde Adventures was an experience I’d like repeat one day, and take the next level of training.

In addition to the California ranch, RawHyde also operates adventure training in Colorado. Go to RawHyde-offroad.com for more information.