The inexperienced rider might call it the highway to hell; others call it the most exciting motorcycle loop in Tennessee

Gone are the past weekend’s ear-shattering crescendo of exhaust that reverberated through the valley during the Spring Thunder in the Smokies Rally. It has been replaced by the quiet serenity of nature, and the only sound this morning is the tack-tack-whistle of a red cardinal. 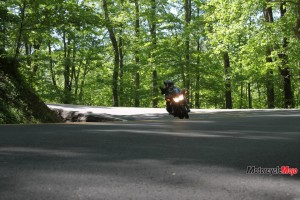 Sitting in my squeaky red rocking chair on our porch, the chattering Campbell Creek tells me of its trek from high in the Smokies. This is Pioneer Village Resort, an assortment of log cabins that remind us of simpler times and our personal Shangri-La in Maggie Valley, North Carolina – the ultimate centre for hundreds of kilometres of the best riding in the Appalachians.

The smell of breakfast wafting from the kitchen breaks my reverie and soon my wife, Tina, and I are packed and mounted, and off to meet our friends Rich and Liz just across the wooden bridge from our cabin. 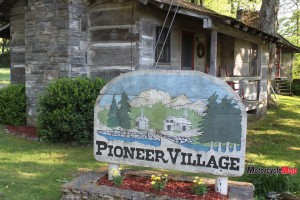 Over 125 years ago, Jack Setzer applied to open the first post office here, but one of the requirements was a name for this place. His youngest daughter’s name was Maggie Mae, and today, Maggie Valley in the heart of the Smoky Mountains bears her name and echoes with the pleasurable sound of motorcycles arriving from far and wide.
Legendary rides with names like the Green-Eyed Snake, Hellbender, the Dragon and the Diamondback exude a tempered fear in the hearts of the meek. But today, our appointment with Lucifer is a temptation too great to pass up, so we thread our way through the valley, seeking one of America’s most challenging and beautiful stretches of interstate highway that will lead us to a devil’s den.

For 50 of America’s sweetest interstate kilometres, I-40 winds north through the Smoky Mountain National Forest like a giant green python wriggling through the valley. Tall oak-covered mountains rising up on either side complete the picture. Unfortunately, this morning the road is congested with cars, transports and motorhomes, so we thread our way from lane to lane through a muddled mass of humanity, and try to enjoy the beautiful curves and remove the surplus chicken strips from our tires.

Coming out of the mountains and past Douglas Lake, I-40 bends westward through the gently rolling hills of southern Tennessee. Knoxville soon becomes a distant memory as we exit onto TN 62 and roll by Oak Ridge, home to the Manhattan Project. 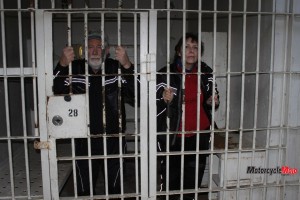 Just past Oliver Springs, we take TN 116, the beginning of the legendary Devil’s Triangle. We wind through hills and mountains to Petros, population 583 and home to many of the guards who worked at the nearby Brushy Mountain State Penitentiary. Heavily gated, this stone prison stands majestically cradled between surrounding snake-infested mountains, as it has for 120 years. This was home for James Earl Ray, the man who killed Martin Luther King Jr. Many other infamous killers and petty criminals used this as their home address – some walking away after paying their debt, and others who lie in unmarked graves down behind the boiler house. Our tour guide, Mark Tucker, a second-generation guard who served there for 25 years, regales us with story after story of murders and mayhem that make our hair stand on end. When the tour ends, we mount up and tentatively straggle out Brushy’s rusty gates. Immediately our minds are occupied with survival on the Devil’s Triangle. Newly paved, this road/treat has few guardrails, and with 30-metre-plus drop-offs down through the trees, a deep respect for speed and traction kicks in.

First thing, a long, uphill, never-ending left-hander greets us. The cement barrier at its outside edge is adorned with the spray-painted signatures and words of those who have passed this way, such as “Highway to Hell” and “Turn Right,” along with many of the usual assorted inscriptions of undying or unrequited love. Mottled sunlight filters through the forest canopy, providing a jungle-like feeling as we sweep into another 15 mph bend that terraces us downward into a valley. As we slow for a turn, we spot three riders gathered at the roadside waving to us. They alert us to some gravel on the roadway where a friend of theirs ended up in a shower of sparks and with a dented ego. Experience tells me that I always have to remember that these are public roads, not a racetrack, and unexpected surprises are ready to ambush me around every corner. Modest homes, trailers and double-wides dot the roadside as we turn from TN 116 onto TN 330. Here, the tight twisties give way to long, gentle sweepers unwinding us appropriately, because at Oliver Springs, we will have completed the devil’s 80 km triangle.

It’s hard to believe that just 10 minutes away, in this pristine area, the mystery of the atom was unravelled, leading to death and destruction that would rain down on Nagasaki and Hiroshima and end the Second World War. Oak Ridge was not even a town until 1942, when the Manhattan Project site was chosen for a uranium enrichment plant and a pilot plutonium reactor. Suddenly, a town of 30,000 people was born. Back on I-40 and heading east, the late-afternoon traffic through Knoxville proves insignificant, but that meandering stretch through the mountains is quite another story and a great way to put a ribbon on the day. We’re home again at our log cabin and chock full of memories; the tales from Brushy Mountain prison will be with me forever. Yes, it is the Devil’s Triangle – and in more ways than one.

Opened in 1896, Brushy Mountain State Penitentiary was built by inmates with the stone quarried from the nearby mountains. Later, inmates did forced labour in the coal mines behind the prison, and if they did not meet their daily quota, they were whipped. Under the laundry area, there are several cells with no windows called “the Hold.” That’s where inmates who behaved badly were kept in complete darkness for up to 30 days, sometimes more, with only a pail of water and a pail for their personal refuse. They received a hard biscuit for food each day, and every third day they were given a modest meal of gruel made from turnip.

There was an electric chair here, but it was never used. Those sentenced to death were taken to Knoxville. Retired guard Mark Tucker says that you can’t take a step anywhere in “the Yard” without stepping where human blood was spilled. Infamous prisoners at Brushy Mountain include James Earl Ray, who attempted to escape at least four times; John Tate, the boxer; and Frank Randall, another famous boxer. Ironically, years ago, a deer managed to get inside the walls and became a pet of the inmates. They fed it scraps of food and nobody dared harm the deer for fear of retribution. Each year, the Barkley Marathon, considered one of the toughest marathons in the world, is held in the mountains right behind the prison. It’s referred to as being “60 hours of hell,” and since its inception in 1998, only 14 runners, out of more than 1,000 participants, have finished it.