After a decades-long run, a staple in Honda’s lineup gets a makeover

The Honda Rebel is one of those bikes that have had an unusually long production run, and for good reason. First introduced in 1985, the 250 Rebel has had a healthy run for decades, and was a mainstay of Honda’s entry-level motorcycles as well as a staple mount for training centres across the country. The Rebel was also the first bike of many of today’s riders. In fact, there was one in my garage in the late ’80s, as it was my wife’s first bike.

There are various reasons for a bike to be on the market for several years or even decades: perhaps it continually serves the purpose it was designed for, or it’s reliable and just plain works well in its original form. In other words, why change something that isn’t broken? Every manufacturer can lay claim to one model’s longevity in its inventory, and in Honda’s case, it was the CMX250C, otherwise known as the 250 Rebel. 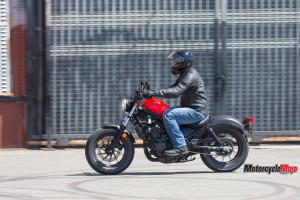 But all good things must come to an end. Over the past few years, Honda has been introducing a staggering number of newly designed engines and repurposing these powerplants into a likewise staggering number of new models. Understandably, the old must eventually be replaced with the new, and the 2017 Rebel is the company’s most recent entry-level offering aimed directly at a new generation of riders. And with a low seat height of only 691 mm and weight of 165 kg (185 kg for the Rebel 500; add 3 kg for ABS), I doubt whether there is a person of driving age that this bike won’t fit. 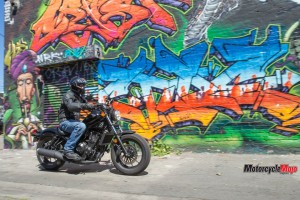 I was fortunate to attend this past spring’s international press launch for the new Rebel 300 and the Rebel 500 in Venice, California, to try out these new offerings from Honda. The two Rebels have been designed as simple and raw. True to that description, they are no-frills, yet offer a unique look and stance unlike anything else on the market.

It’s as if the Rebel’s designer blended a cruiser with the styling of a bobber and a little chopper thrown in the mix. How you interpret the bike is up to you, but the overall solo seat design, fat tires, side-mounted ignition, and chopper-style frame and gas tank would insinuate a melding of coolness associated with the bare-bones bobber or chopper scene. The bottom line is that you’ll get noticed when riding this blacked-out modern take on an old-school minimalistic design.

Having a press launch centred in a major metropolis is not unusual, although having the majority of seat time spent on city streets is a little odd. But let’s face it, these are not sport bikes made for carving canyons, nor would the general consumer consider these minimalistic urban dwellers long-distance touring bikes. They are small and nimble bikes, and both the 300 and 500 versions are well suited for city life or taking on commuter duty. The latter can expand on that scenario based solely on engine size and would also be suitable for extended highway travel. 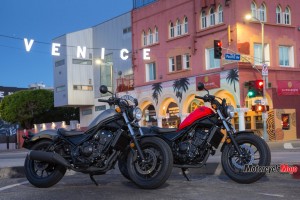 Both versions are constructed on unique but identical frames and bodywork, with the exception of the engines, of course, and therefore curb weight, and colours. These powerplants are derived from proven platforms: the single-cylinder CBR300R and the parallel-twin CBR500R, but have been retuned for a cruiser feel and sound. It goes without saying that the 500 pulls harder and smoother on acceleration than the 300, but both are fun in the city. That’s the beauty of a small engine – it lets you work the full range of rpm and row through the gears and, in turn, keeps you engaged with the machine. It just isn’t the same with a bigger engine with tall gearing that can launch between stoplights without the need to even change gears.

The 500 handled freeway duties without any drama, and while the 300 single more than managed the much faster pace of freeway traffic, the engine sounded very busy. Mind you, at one point traffic was moving at around 115 km/h, a pretty good pace for a small single-cylinder engine. I can’t tell you the rpm of either engine at higher speeds, as neither bike has a tach, but we were told the 500 redlines at about 9,000 rpm and the 300 in the vicinity of 10,000. Engine tuning and fuel delivery were spot-on, in true Honda fashion.

The 471 cc of the 500 is vibration-free, thanks to the crank pins being phased at 180 degrees, which in itself helps to cancel out any vibration, but in addition to that, the twin has a balancer shaft that quells any vibes that might get through. I didn’t feel any vibrations from the 500 anywhere in the rev range. I did feel a little vibration in the foot pegs at high rpm on the 286 cc smaller Rebel. It, too, uses a balance shaft, and the end result is quite impressive, considering how high the single revs on the freeway.

Shifting of the six-speed transmission was always smooth and precise with just a light effort at the shift lever, and the gear ratio worked well with the engine’s fairly wide power band. Even on the 300, modulating engine rpm in conjunction with the clutch’s light lever effort resulted in a clean getaway that never once left me with a stalled engine.

On both the 300 and the 500, power is transferred to the pavement via chain final drive and a wide 150-section tire. The 130/90-16-inch front tire is also larger than you might expect on a bike of this small stature, but this follows suit of the bobber styling. The wide tires also help in the city when you encounter streetcar tracks.

Stopping the Rebel is a single 296 mm disc up front with a two-piston caliper doing hydraulic duty, while the rear has a 240 mm disc and a single-piston caliper. While nothing fancy, they easily did the job at hand and slowed the bike quickly with a moderate squeeze on the front lever. ABS is available on both models for a paltry $200 more over the base price, making it a no-brainer for the added safety ABS brings to the table.

Suspension duties are handled by a pair of coil over shocks on the rear and traditional forks up front. Even though I was riding in Southern California, I was on a few roads with questionable tarmac in places that mimicked the quality of our Canadian roads, and while the front and rear suspenders worked well, the rear did bottom out on me once over a large bump.

Part of the draw of riding in the Los Angeles area is that even though it’s a massive city, it still has twisty roads, particularly as elevations climb west of the city in the residential area of Beverly Hills. The Rebel handled well in the corners, and steering was predictable and responsive with just a light push on the grip to initiate the turn.

Riding position is relaxed and neutral with mid-mount pegs and an easy reach to the hand grips. As mentioned, most of the riding was within the sprawling metropolis of L.A., so there was plenty of stop and start, allowing movement and not being stuck in one position for hours on end. While some of the other riders found the seat uncomfortable, I didn’t have a problem with it at all.

Honda claims the Rebel is ripe for customization, and in fact there were a couple of models on display that were indeed customized, but Honda’s website doesn’t offer any customization parts other than saddlebags, a fly screen, a luggage rack and a pillion seat.

As for custom parts, I’m sure the aftermarket will pick up on the new Rebel, and I expect that soon there will be loads of accessories available to personalize your own ride.