Polar opposites collide to form this Jekyll and Hyde ride

It’s hard to think of two kinds of bike more radically different from each other than a chopper and a superbike, the Arctic and Antarctic of planet motorcycle. Yet, if there’s one man capable of blending those two polar opposites into one combined package, it’s Roland Sands – and that’s exactly what the Los Angeles-based fusion chef of custom cool has done in creating his award-winning Black Beauty, which took home the second-place Sponsor’s Choice trophy in the Modified Harley class sponsored by the Motor Company itself at the prestigious AMD World Championship of Custom Bike Building, staged at the Sturgis Rally in South Dakota. Only second place, though? That’s because Sands beat himself, as well as all the other contestants, to win first prize with his radical Bu-hell – a superbike that thinks it’s a chopper, whereas Black Beauty is a chopper that thinks it’s a superbike. Pretty schizy, huh? 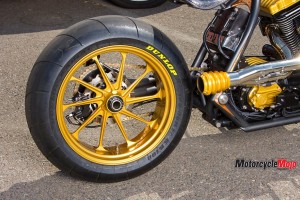 Black Beauty is indeed a radical example of two-wheeled schizophrenia, with its thin-wall, spliced, ape-hanger handlebar festooned with Performance Machine (PM) Contrast Cut hand controls guiding a skinny PM Assault 21-inch front wheel shod with 120/70 Dunlop Elite rubber via raked-out Kayaba upside-down forks sourced from the ’08 Suzuki GSX-R1000 parts bin, mounted in black-anodized PM Contour triple clamps. There’s a similar mechanical juxtaposition at the rear, where behind the hand-tooled leather seat created by Mauricio at Aztec Custom Cars in L.A. sits a fat 195/65-17 hand-cut Dunlop KR108 road-racing slick mounted on a six-inch Assault wheel hung on a curved TIG-welded Gregg’s Customs 4130 chrome-moly single-sided swingarm, modified by Roland Sands Design to pivot in the stock Harley-Davidson Softail frame. For beneath the refined glitz of this black-and-gold SuperChopper is a pimped-out stock ’03-model Harley Softail that got turned into a bike with a split personality by Sands and his guys at RSD in the space of just a few weeks, after he was invited to let his imagination run riot in building a bike for one of his clients. 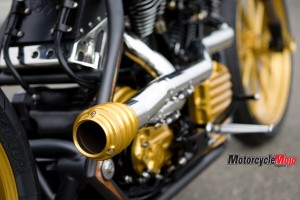 “I had a customer who just said he wanted ‘something crazy,’ so I decided to give him the baddest chopper I could build,” Sands says with a smirk. “I’m proud of all the stuff we do, but I really, really like this bike, because everything a chopper ought not to be, it is. It’s absolutely minimalistic, really lightweight, all stripped out – there’s nothing on there that doesn’t need to be there. You know, a lot of people think that building a chopper means basically chopping the front up to rake out the forks, and leave the rear half alone, but we did it the other way round. This has stock geometry, and the wheelbase is standard Harley Softail – maybe even a bit shorter with the upside-down forks. And the rest of what we did change was because of aesthetics, like the single-sided swingarm and stuff, which is what makes this bike so cool.”

With 11 full-time RSD employees who laboured all day and a good part of the night to get Black Beauty born in time – completing it barely in time before wheeling it out of the workshop and into a truck for the drive to Sturgis, and presenting it to the judges exactly three days later. “It was cool to get the Sponsor’s Choice awards from Harley-Davidson themselves, because that showed they appreciated what we’d done,” Sands says with the air of a kid who’s been given a credit mark by his schoolteacher.