“Created to provide quintessential performance.” That’s Ducati’s proclaimed axiom behind the development of this bike, and after riding it, I reckon its engineers have hit the bull’s eye

It’s become a bit of a cliché to call something a mechanical work of art, but if ever a motorcycle deserved that accolade, it’s the Ducati 1299 Superleggera. Dripping in carbon fibre, replete with titanium and flaunting endless examples of technological innovation found on nothing else with two wheels and an engine, the whole clothed in bodywork of stunning beauty – this is the latest testament to Ducati’s ability to combine exquisite looks with a stellar level of performance sourced from winning countless races and championships.

The Superleggera was launched at the EICMA Milan Show last November as a limited edition model of which just 500 examples will be built. Unfortunately, if you were slow to put a deposit down on one via its dedicated website, you’ve lost out. At around C$85,000, all of them have been sold, and it’s said that 16 are coming to Canada. 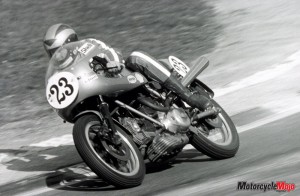 Yet the 1299 Superleggera also marks a significant landmark in Ducati history, beyond its sheer unmatched excellence in conception and execution. For with the advent next year of the Italian firm’s first V4 superbike, this is the last of the line of the its series of desmo V-twin street-legal race bikes, the ultimate evolution of this unique format that has so far garnered 14 World Superbike rider’s titles and 15 manufacturer’s crowns, in winning 329 races to date in the past 30 seasons. It’s a line that began in 1974 with the debut of the green-frame 750SS, of which just 401 examples were ever made as a pretty close replica of Paul Smart’s Imola 200-winning factory desmo V-twin, just as the new Ducati 1299 Superleggera is to the factory F17 superbikes that are at the front of the field in WSBK competition. Actually, it’s even better chassis-wise, with a carbon fibre, semi-monocoque frame structure that saves 1.7 kg over the racer’s heavier aluminum equivalent. And it’s pretty close in engine performance, too, with a claimed 215 hp on tap at 11,000 rpm – 15 hp more than the Panigale R currently leading the FIM Superstock series.

Having begun my racing career back in the mists of time as one of the 401 lucky owners of the aforementioned green-frame 750SS, which I had bought new in 1974, I still race in Classic F750 events on what is apparently the last such genuine bike to be used in something approaching anger on the racetrack. So for me, the honour – no other word for it – was especially meaningful to be one of only eight journalists from around the world invited to sample the 1299 Superleggera at the Mugello GP circuit just a couple of weeks before this year’s Italian MotoGP was held there. Riding this two-wheeled work of desmodromic art composed of magnesium, titanium, aluminum and carbon fibre – scaling a featherweight 178 kg ready to roll with a full 17-litre fuel tank – was an undoubted thrill.