Eating dirt is underrated, especially in the case of adventure riding. The fact my teeth are very well coated in red dust today simply means I can’t stop grinning. I’m riding full throttle up a rocky dirt road in ridiculously beautiful Utah with a pack of mates – certainly cause for glee – but what’s really behind the grin is the fact I’m having this much fun on a 300 cc adventure bike. What a great surprise. 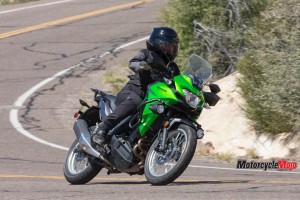 Kawasaki has hit many marks with its all-new small-scale adventure bike, beginning with stature. It doesn’t feel like a small motorcycle, though it does feel extremely light and maneuverable. And it’s this combination of lightweight agility and upright roominess that sets a perfect stage for riders of any ability to utilize and enjoy the bike’s remarkable performance features.

The first Versys launched by Kawasaki was the 650, back in 2007. I was there for that introduction and remember the bike being positioned as a kind of multi-tool: a flexible platform for commuting, sport riding and light touring. The category of ADV, along with its swashbuckling fan base, was yet to ignite. Since its inception, the Versys line has added a 1,000 cc model and has evolved to offer improved engine characteristics, suspension and amenities such as ABS, though neither the 650 cc nor 1,000 cc version has been pitched directly to the ever-eager adventure crowd. 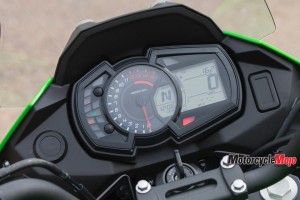 Kawasaki’s tag line for the 300 is “Any Road, Any Time,” and while the marketing department doesn’t go as far as to say the little chain-driven Versys is purposed for off-road use, it wouldn’t be a stretch. The 19-inch front and 17-inch rear spoked wheels and tubed tires alone tell the intention. It might not be the “Street Legal Dirt bike” Honda has brought to the entry-level ADV party in its CRF250L and new CRF250L Rally when it comes to roosting, but the Kawasaki does work quite well off pavement and will happily play Tonto to a larger ADV bike, no problem.

The Versys-X 300’s suspension is well balanced, with a 41 mm telescopic fork offering 130 mm of travel up front, and a Bottom-Link Uni-Trak gas-charged shock with adjustable preload and 147 mm of travel out back, just enough for some mild off-road antics. I’ve only had the fork bottom once during our dusty, fast-paced romp along some fairly rocky fire roads. Adding luggage and certainly adding a passenger might hasten some hits, but all in all, the Versys is a totally viable option for the type of on/off-road touring most would do with a much heavier, more traditional adventure bike, and way – way – easier to ride. 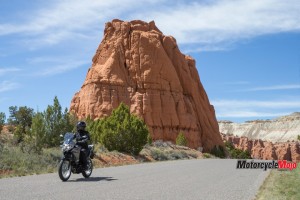 It’s also a featherweight champ in the full range of street settings, from urban commuting to canyon carving to legitimate long-distance touring. The liquid-cooled, eight-valve parallel-twin engine borrowed from the ultra-sporty Ninja 300 has been tuned to deliver strong low- and mid-range torque, which results in smooth, predictable power delivery at low speeds. And that power band is vast, spooling nicely just above idle and stretching taut all the way to a 12,000 rpm redline. Gear ratios encourage mid-range shifting, so achieving freeway speeds is surprisingly relaxed business. And when I say freeway speeds, I mean proactive speeds, not necessarily posted limits. Reaching and maintaining 125 km/h is quick and silky smooth, with the nicely balanced twin spinning comfortably right around 8,000 rpm.

At one point – strictly for the sake of research – I had my test unit flying across the high desert landscape at 164 km/h for a sustained period with the tach quivering against redline, and still the ride was remarkably smooth. The engine emits a manic hum and a high-frequency shiver can be felt through the bar and foot pegs, and that was it.

The chassis is likewise unflustered at open-road speeds, providing a very stable platform whether you’re barrelling along an arrow-straight highway or dipping into fast sweepers. In tighter cornering, there is an urge to stir the gearbox, but really no need. The engine delights in being revved, and subsequent engine braking serves well to moderate speed through successive corners, but since there is proportionate torque down low, you can also select a tall gear for a quieter, yet no less impressive experience.

Mind you, acceleration is not going to be dramatic in any gear, but it will be sufficient for fun and defensive safety. The same goes for the braking system. The Nissan petal discs, a 290 mm up front and 220 mm in back, are entirely up to snuff, drawing the little bike’s speed down quickly. The test bikes Kawasaki turned us loose on were all equipped with the U.S.-optional ABS, a super-practical feature that’s included in the reasonable $6,399 base price for the Canadian edition. The ABS is not at all intrusive, and is very useful during all types of riding, especially for beginners and urban commuters.

Some experienced riders will miss using the rear brake as a steering element off-road, but this engine is so flexible and tame you can pop the throttle to steer just as effectively. The Bosch 10M ABS unit can’t be disengaged, as systems on more dirt-oriented bikes in this lightweight adventure class can be, but it’s hard to imagine an occasion you’d flog the street-bias Versys-X 300 in a way that warrants such aggressive braking control.

If the 50 states were in a beauty pageant, Utah would wear the crown. She’s a toppled layer cake: her reds and creams and pinks and browns askew; sedimentary layers representing millions of years’ worth of geologic history, laid yawning and bare. Around every corner and over each rise your eyes are greeted with natural wonder, your mind with intrigue. As you would imagine, the roads negotiating this rugged, high-altitude landscape are ideal for motorcycle travel, and the little Kawasaki is a fun choice of steed.

At low speeds the Versys-X 300 is extremely friendly, with a tight turning radius and light feel at the bar. The bike responds eagerly to input and rider position on the bike, something the engineers at Kawasaki have made a priority. The result is a trust-inspiring sense of back-and-forth feedback that will encourage new riders.

Another super-friendly feature is the light, goof-proof assist and slipper clutch. The assist cam pulls the clutch hub and operating plate together to compress the clutch plates, creating a truly featherlight clutch feel at normal rpm, while the slipper cam relieves pressure during excessive engine braking by forcing the clutch hub and operating plate apart, which helps to reduce rear-wheel hop or skipping if you prematurely shift into too short a gear.

The Versys-X 300’s many amiable characteristics are ideal for touring Utah, where one minute you’re tootling around a crowded viewpoint parking lot and the next you’re flying through a set of sweepers or racing up a dirt road. The little Kawasaki is even pleasant for droning along the freeway, though long stints in the stock saddle will produce a major bum ache. It appears, however, the seat will eventually break in, as proven by a stint on one of the long-ridden pre-production units.

One Size Fits All

I’m 5’ 10” with a 34-inch inseam, and the bike, with its roomy ergonomics and relatively low 815 mm seat height, felt very spacious and comfortable, even during long days. At a standstill, the narrow seat and frame makes it easy for a rider to get his or her feet firmly planted on the ground. Our group of nine riders ranged in height from 5’ 5” to 6’ 3” and everyone, including those at the extremes, seemed impressed by the fit. The taller riders, myself included, opted for and enjoyed the addition of the accessory Ergo-Fit extended reach saddle (see “All Dressed Up and Everywhere to Go”), which adds 25 mm of height over the stock saddle.
If you fell from a clear-blue sky and landed in the cockpit of the Versys-X, you would never guess it is a 300 cc motorcycle. In stature it feels more like a 650. I’ve owned and loved more than one KLR 650, and I have to say this 300 is a tad more comfortable and stable-feeling on the highway. And by utilizing a twin instead of a single cylinder, it’s also much smoother than the KLR or, for that matter, Honda’s comparable CRF250L, which is also powered by a single.

I once rode a KLR650 to Alaska and had a great time. But would I ride a Versys-X 300? This is the idea I entertain as we sweep through the stunning Utah scenery headed for our final hotel and flights home. “It sure would be interesting to know how long it takes to break in this seat,” I think. “And what does this cool instrument pod look like at night anyway? Hmm. At best guess, my fuel economy I’ve been getting here in Utah sits at around 3.6 L/100 km, times another 5,300 km from here to Anchorage, I’d be looking at less than $250 for fuel. Plus hotels. And oh yeah, I’ll have to buy all those extra toothbrushes.” For all those dusty smiles.