When an abstract idea becomes a concrete creation, we call it art. From Jean-Michel Basquiat to Vincent van Gogh, interpretation of the presentation is in the eye of the beholder, and the range of reactions can be extreme. 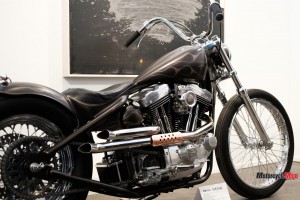 Masterpieces or not, in early May, close to 40 hand-built motorcycles rolled into Calgary’s Christine Klassen Gallery for the third edition of the IFK Kickstart Show. Celebrating the garage-based builder working with metal, grinders, welders and a variety of hand tools with the motorcycle as the medium, Kickstart is all about gasoline and spark plugs.

“There’s a great sense of satisfaction when you put together a motorcycle – the machining, the fabricating, the welding – and then when it’s all done, you can take it for a ride,” says Kickstart co-coordinator Kenny Kwan of Ill-Fated Kustoms + TANK. “There won’t be another machine around quite like it.” Kickstart 2017 featured a diverse range of machines, from custom Moto Guzzi adventure bikes to Triumph pre-unit bob jobs, and restored and modified Yamaha RD400 café racers. There were rat scooters, pristine Royal Enfields and several Harley-Davidsons, from a uni-body Sportster to an Evo chopper. Perhaps the most interesting build was Marco Luk’s 1982 Harley-Davidson FLHS. Although the machine defies categorization, it earned him second place in the Vintage class. 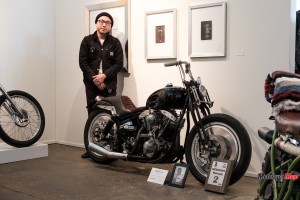 Luk epitomizes the garage-based motorcycle builder. In his early 20s, he modified a Honda CB750 in his mom’s unheated Edmonton garage, working with a basic socket set from Canadian Tire and a used MIG welder. His feet would get so cold he’d thaw them out with an electric heat gun. After moving to Calgary, he continued refining his skills and bought a lathe. Luk worked on his projects in a number of borrowed garages until he bought his own house, complete with a two-car garage, now equipped with TIG welding gear, a heater and much better tools. He rides every motorcycle he’s built, sometimes as far as Mexico.

For his latest build, Luk spent countless hours modifying his Harley-Davidson’s frame, painstakingly cutting it apart to add castings and tubes, giving it a wishbone-style front and a Duo Glide’s dropped seat rails. His intricate, handmade details are endless, including the springer front end modified with dual disc-brake mounts machined and then shaped as though they had been cast. No stranger to custom motorcycle shows, Luk has visited events such as Born-Free and the Brooklyn Invitational, and as an invited builder to the One Show in Portland, Oregon. 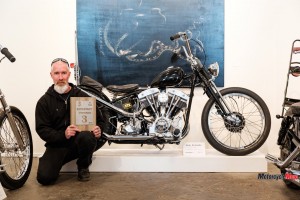 For Calgary’s Kickstart, Luk and other custom builders submitted registrations and were selected to display their one-off motorcycles. This year, more than 1,000 people flowed through the two-day event, taking in the machines, vendors, food and libations. Plans are underway for Kickstart 2018. Of this year’s Kickstart , Luk says he enjoyed the less chaotic pace, as the machines were displayed as objects of art. “It’s a smaller show, and the gallery setting forces people to slow down, stop and really look at the motorcycles,” Luk says. “Kickstart was more about the bike, and the artistry of the build, than anything else.”…