Can Harley’s newest midsize offering impress on some of Europe’s finest motorcycle roads?

The invitation could hardly have been more specific, and enticing. “You are invited to Marbella, Spain, to view, ride and understand the new Harley-Davidson Street Rod. You will be able to ride the new model in urban and country locations for a full day, including along two of the routes widely recognized as being among the most enjoyable and demanding biking roads in Europe. You will ride along the twisting A366 tarmac roller coaster via El Burgo to the historic city of Ronda, spectacularly located in the mountains above Marbella. You will then descend back to Marbella along the legendary A397 – a sinuous length of challenging road steeped in automotive and motorcycling history.” Yes, please!

Hang on, though – you’re inviting me to ride a Harley along those fabulous racer roads where I’ve had the thrill of exploiting the performance and especially the handling of successive Ducati, Triumph, KTM, BMW and Yamaha models down the years – and have left witness marks to say “I Was Here!” by grinding their footrests in the asphalt to prove it. So, what can this new Street Rod be then? A Harley that handles? 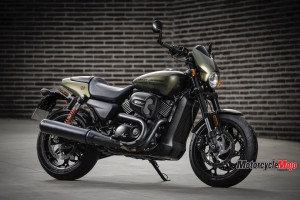 Harley-Davidson Europe was indeed confident enough in the company’s new Street Rod model to invite me to tackle the Ronda roads on it. That contrasted with Harley’s head office, which held its U.S. press launch in Florida, where anything other than a right-angle turn is alien territory, and elevation an abstract concept. Okay, so it was Bike Week in Daytona – but even so, gentlemen, you should have had more faith in what your R&D guys have come up with. Their job may have been to produce an urban streetfighter aimed at bringing younger riders into the Harley fold, but the result is a great deal more than that, which deserves to be ridden hard and not simply treated as a simple traffic tool, effective as it may be at this.

A 220 km high-speed day’s ride along some of the most demanding two-wheeled territory in Europe indeed underlined the broad capabilities of Harley’s new Street Rod package, in delivering H-D dealers with a genuine rival to the Triumph Street Twin, Yamaha FZ-07, and especially the Ducati Monster 797 and its Scrambler cousins – albeit one with a truly American personality at a super-competitive price. “We’re reaching out to customers in a space where we didn’t really have a product before now, who are already perhaps well-disposed toward Harley-Davidson, but haven’t yet found the bike in our lineup to meet their needs,” Jeff Strunk, H-D’s motorcycle product planning manager, says. “They’re primarily a younger crowd, living in a more urban environment, looking for a bike to get around on in a more exciting way.”