After more than four decades in the power sports industry, the effervescent and seemingly ageless Bruce Parker has touched, in a positive manner, a great number of people. He has furthered the careers of many racers, partners, friends, employees, clothing manufacturers, suppliers, distributors and dealers. Within the industry, it’s easy to find people who only have good things to say about the man who did so much for so many.

Maybe it’s because Parker has always done things with his own brand of flair and style. His humour and a self-effacing attitude are instantly likable. His ego always seems to be in check; in the time I’ve known him – and that goes all the way back to the mid-’80s – he’s always been quick to offer a sincere hello and a joke. Parker’s also a high-energy super-salesman who could easily sell screen doors for submarines if he wanted. Around the time we met, he owned a Windsor-based motorcycle dealership selling Kawasaki, Yamaha, Suzuki, Harley-Davidson and Bimota motorcycles. He expanded into two more locations, including one in Etobicoke, Ont., that was managed by then top-250 cc road racer Dave Grummett. “Parker’s greatest asset is his drive to win and succeed. ‘Work hard, play harder’ describes Parker best,” Grummett says. 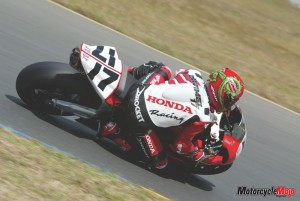 By the late 1980s, Parker decided that clothing and accessories was the best part of the business, and he chose to produce suits and jackets under the name Body Guard by Parker Bros. Ultimately Parker and his then employee Marc Bay developed the Joe Rocket brand, the name coming about during a brainstorming session in a bar fuelled by libations and good humour with long-time friend Chris Ellis. The Joe Rocket name was born on a proverbial beer-soaked napkin, and Parker has never looked back.

Using crayons, coloured pencils and markers, Parker and Bay penned the original logos and designs. Although neither is a professional graphic artist, the signature Joe Rocket look caught on quickly, and those scribblings established trends that are still in play today.

Grummett continued, “In the beginning, Joe Rocket’s product range had names that were offensive and in-your-face but unforgettable. Names like Joe Schmo, Joe Highside, Joe T.O. and the most controversial – Joe Bitch. Originally, we didn’t think much of the Joe Rocket name, but it worked, and we sold a ton of jackets and suits. The first Phoenix jacket was awesome. When I saw the prototype, I knew we were going to sell a lot of those. One of the secrets to the Rocket brand was North Americans could pronounce the name, as opposed to some of the European brands.”

Eventually, Grummett went on to buy the Etobicoke Parker Bros. store when Parker dedicated his time to the wholesale side of the business. When asked what was the most memorable moment in his relationship with Parker, Grummett quickly replies, “Bruce sponsored me during my racing career starting in 1987; I was the first road racer to wear Joe Rocket gear. In 1990, I had a brand-new Yamaha TZ 250, which is a full-on Grand Prix road-race bike. Bruce wanted to ride it real bad so we fired it up, and wearing only a T-shirt, shorts, beanie helmet and sunglasses, he did laps on Walker Road in Windsor out in front of the store. We were killing ourselves laughing.” 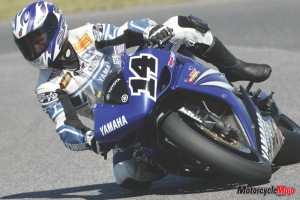 The company’s first brochure was shot by shutterbug extraordinaire Bill Petro. “The cost of shooting the photos for the first brochure nearly broke us,” Bay says. “These days, we’d love to have such reasonable prices for photography.” The first Joe Rocket textile jackets were made in Quebec using, at the time, a revolutionary Canadian-made material called 600D polyester, which is now an industry standard. Parker and Bay added abrasion-resistant Kevlar panels and amour in all the key areas using material they found at a military surplus vendor that had an overstock of Kevlar.

They were faced with constant challenges, one of which was sun fading; some jackets faded from red to pink within a year. The problem was solved by a Canadian fabric mill, which developed a suitable UV-resistant material for the harsh conditions. “We tried to keep our customers happy, and we replaced or repaired defects without question and have always stood behind Joe Rocket clothing,” Bay says. 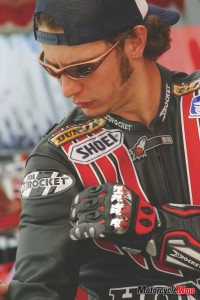 Bay adds that their “early design process was archaic. We’d send black-and-white faxes to the manufacturer and sometimes spend up to 18 days in a row at the Quebec factory tweaking the designs to get things just right. All the work and attention to detail paid off: the Joe Rocket Ballistic jacket sold like hot cakes and is still produced, albeit in an evolved form.”

Bay also has a story related to the in-your-face-style Joe Rocket used to sell clothing. “One of our original logos was a cartoon of a rider, called Joe Speed, flipping off a cop. We never used it, but we did use a lot of lightning bolts, racing stripes and flames – our racers gave us a great canvas to try out new designs.” Bay explains that once a racer wore a design, “the following year we’d have a replica jacket available to the public. Over the years, we had a series of racer’s jackets, such as the Lawson 21, the Nicky 69 and the Schwantz 34. All of these rider replica jackets sold well for us.”

Own the Podium
Business was good for Parker. In Joe Rocket’s heyday, the company signed big name riders to wear its gear, and subsequently the motorcycle magazines gave the brand tons of exposure and, as a result, sales boomed. Joe Rocket riders swept the podium at the famous Daytona 200 a number of times. In 2006, three stand-out riders, Mat Mladin, Ben Spies and Miguel Duhamel, carried the Joe Rocket name to the top. Most of the premier racers during the ’90s wore Rocket at one time or another, including Chris Carr, Doug Chandler, Jordan Szoke, Pascal Picotte, the Hayden Brothers and, most recently, Michael Jordan’s race team.

Paying for riders’ endorsements was expensive, but was viewed as a capital investment and an investment in the sport that made a significant difference in brand recognition at dealer show rooms. According to J.D. Power surveys, Joe Rocket often led sales of motorcycle clothing during this era.

“Two milestones changed Joe Rocket,” Bay recounts. “One was signing Steve Crevier in the late ’90s. Crevier did wonders for us; he won races and championships – plus he had that edgy image – you’d never know what he’d say or do next. In June 1999, we got a cover shot on Motorcyclist magazine that featured a Crevier jacket. I was paying for my subscription at the time and it was huge to see that, we thought we’d really made it when that issue came out!” They sold Crevier jackets hand over fist as a result of support for the iconic racer and that magazine shot.

In order to focus on designs and marketing, Parker and Bay decided to forego distributing the Joe Rocket brand to snowmobile clothing entrepreneur Randy Robison, instead selling it outright in 1996. Parker re-acquired 10 per cent ownership back in 2001, but left the company in 2007 and started another brand called Speed and Strength the following year. However, times changed, and in 2008, the real estate slump in the U.S. and ensuing slowdown in road-racing activity in North America saw a significant drop in sales for the Joe Rocket brand, and the industry in general. In 2009, Parker acquired the Joe Rocket rights for the Canadian market and enjoyed commercial success with, until recently, Motovan acting as the Rocket distributor. Currently, Gamma Sales distributes Joe Rocket in Canada, while another entity, Parker Synergies, operates the design team that works on both the Joe Rocket and Speed and Strength brands.

Parker has been called a rapscallion and an incorrigible prankster, but he’s been called worse. He made the cover of a 2003 issue of the Canadian Motorcycle Dealer and Trade magazine, a now defunct insider industry rag. The close-up cover shot was so revealing you could count his nose hairs. The headline boldly stated: “How Did the Most Hated Guy in Retail Become an Aftermarket Superhero?” Undaunted, Parker seems to revel in the spotlight despite his ups and downs. When asked about the history of Joe Rocket, Parker responds that Joe Rocket wouldn’t exist if not for the Parker Bros. stores. “In its heyday, the Toronto store on Dundas Street had up to 40 race suits in stock and helmets piled to the ceiling. They said we tried to put Cycle World [which was next door] out of business. That wasn’t necessarily true; however, I am quite sure John Bagby, the owner of Cycle World, would love to have put us under,” he says. “At one point, we found them looking through our garbage. Instead, we survived and flourished. Our customers would park in front of Cycle World and walk over to buy from us. It must have frosted their cookies, to say the least.”

Chris Ellis, Triumph Canada’s general manager, remembers an era that built legends in the Canadian motorcycle industry. He fondly recalls a Yamaha dealer trip to Japan in 1982 that had Mike Inglis, Danny Baldwin, Peter Hurst, John Mochrie, Bruce Parker and himself pull some shenanigans that are probably still being talked about in the Land of the Rising Sun. “We stayed at Yamaha’s corporate retreat, called Summagoi, and visited pagodas – it was full-on frivolity, the details of which will stay in the vault forever,” the guarded Ellis replies, unwilling to elaborate, despite my pressing the subject. But he does say that “Bruce helped me get back on my feet after my shop closed. In hindsight, it was probably the best thing that happened to me career-wise.”

As a visionary, a philosopher and creative genius, Parker rose to meet every challenge that came his way. The ebb and flow of business never got the better of him. He is most definitely a survivor; his business sense, his boundless energy and his motivation are probably Parker’s most endearing qualities, but his generosity is likely his most notable quality of all.

Over the years, I’ve worked some shows with Parker Bros., helped out in the shop and wore Joe Rocket clothing, and I continue to enjoy the man’s company on any occasion.

The one thing I regret is not wearing Joe Rocket gear to ride the Paris Dakar Rally in 2001. I still remember Parker’s words: “We want to dress you for the Dakar.” But I had already committed to wearing another brand through another old friend and couldn’t go back on that deal. Sorry, Bruce, I wish the timing had worked out better.

When asked how he got Michael Jordan’s race team to wear Joe Rocket, Parker’s reply reveals volumes: “You pay! It’s that simple.” Parker was and is never afraid to invest, and some may even consider him a fast-and-loose gambler, but it has paid off.

The year 2017 is a big one for Canada – 150 years since Confederation, and it’s also significant in the life of Parker; it’s the 25th anniversary of the iconic Joe Rocket clothing brand, and he’ll also be turning a spritely 65. So, look out for big things from Bruce Parker and Joe Rocket in the near future.