Vintage styling captures the eye of this beholder 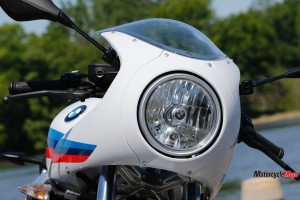 With the 2017 BMW R nineT Racer strapped firmly into the bed of my pickup, I headed home to unload it and begin two weeks of test riding this classically styled machine. Out of all of BMW’s R nineT Heritage models (there are five, if you’ve lost count), it’s the Racer that I find the most stunning visually. And as I drove along on that sunny afternoon with the Racer on display behind me, I noticed I wasn’t alone in my admiration of the bike’s convincing retro styling. Drivers of passing cars slowed beside me to have a look; pedestrians gawked and pointed at intersections; a pair on a bike stopped next to me at a traffic light and gave me an approving thumbs-up.

The red-and-blue-on-white paint scheme catches your eye, but it’s the sleek, bullet-shaped half fairing capped by a large, round headlight that gives the bike a shapely profile that really piques interest. The low handlebar and bulbous seat cowl harken back to the café racers of the past, while various cast-aluminum brackets and the five-spoke cast wheels give the bike a contemporary touch. 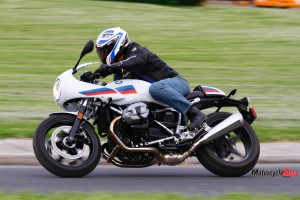 The powertrain is identical to the other R nineT models; propulsion comes via a torquey, 1,170 cc, 110 hp, air-cooled boxer with a broad spread of torque that peaks at 85.5 ft-lb at just 6,000 rpm. Push the starter button and the engine bursts to life with a throaty rumble coming out the two-into-one exhaust, though the sound doesn’t quite match the seductively alluring and surprisingly robust twin-pipe drone of the original R nineT roadster. It’s also a very fuel-efficient engine, averaging 6.5 L/100 km over two weeks of mostly city riding, or good for about 260 km before running its 17-litre fuel tank dry.

The counterbalanced opposed twin produces an agreeable throbbing vibration when launching from a stop that smooths out as revs pick up, though you still feel the power pulses through the seat and at the hand grips any time you twist the throttle to accelerate. Peak horsepower is about half that of BMW’s S1000RR, but the bike lunges forward with surprising authority when you gas it hard, and it does so in higher gears without having to downshift – it does, after all, produce two ft-lb more peak torque than its supersport cousin. Even though its broad spread of torque doesn’t prompt frequent use of the shifter, when you do row through its six speeds, shifter action is featherlight and precise, a far cry from the clunky gearboxes of the R90 Beemers of the 1970s, from which the R nineT name plate originates. 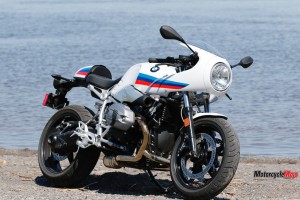 A rigid chassis combines with supersport-spec 17-inch wheels and tires (120/70 front and 180/55 rear) and firm suspension to provide a very sporting ride. Suspension components include a conventional 43 mm telescopic fork and single shock adjustable for rebound damping and preload. Despite its rather basic suspension, the Racer nonetheless has a pleasant ride, which offers softer compliance than the R nineT roadster, though the fork does feel harsh over sharp bumps. At 1,491 mm, the wheelbase is a bit longer than on a typical sport bike, and steering geometry (26.4-degree rake; 104 mm trail) is more relaxed than on a supersport bike, giving the Racer a very stable, planted ride. Steering is neutral, so once leaned over, you need not push constantly on the inside handlebar; but steering effort is heavy and it takes a bit of muscle to change direction.

Now, you may have noticed that I haven’t yet discussed the riding position. To achieve such sophisticated styling, especially when in motion with the rider splayed over the gas tank as if attempting a land speed record at Bonneville, BMW has essentially transformed the rider into a fashion accessory. Swing a leg over the seat and you’ll find that the reach to the ground is a very manageable 805 mm. The bulk of the 220 kg wet weight sits low to the ground and requires little effort to coax off the side stand. But when you lean forward to reach for the handlebar, you keep going and going, and by the time your palms reach the hand grips, they’re in another time zone. By memory, about the only bike that comes close to having such an extreme forward riding position is the Ducati Sport 1000S SportClassic of a dozen years ago, which the R nineT Racer resembles.

As was the case with that now collectible Ducati, spending time on the R nineT Racer’s saddle proves painful, mostly in the lower back and wrists. Granted, the Racer isn’t a touring bike, but it’s not a supersport repli-racer either, so it’s hard to justify such a radical riding position, at least from the seat. However, some justification comes when you change perspective – watch this bike ride by, and the ensemble of rider and machine blend to form an elegantly streamlined silhouette that exudes the impression of speed even when riding at the speed limit through a school zone.

It’s very unlikely that an R nineT Racer buyer will peruse accessory catalogues to select a set of saddlebags, or a taller windscreen or a more comfortable handlebar (which isn’t even a possibility, since the Racer’s handlebar is integrated into the top triple clamp) in an effort to make the bike long-distance capable. And if such buyers do look through the accessory catalogue, it will likely be to select some aesthetic add-ons, maybe some carbon fibre covers, some billet aluminum brackets or a performance exhaust system. It’s also unlikely the R nineT Racer will be the only bike parked in the garage – a statement supported by BMW’s claim that heritage bike buyers, at least in the States, have an average income of about US$125,000.

The R nineT Racer retails for $14,150, which is $100 less than the Scrambler and $2,700 less than the original R nineT. This makes it the second least- expensive nineT model, out-priced by the $12,950 R nineT Pure. Despite being the most visually captivating model to me, the Racer is the one I least enjoyed riding among the models I have already sampled, which to date includes the original and the R nineT Scrambler. That is, at least if the ride lasted more than an hour – in short spurts, I loved this bike, and it always incited conversation when parked.

With the growing trend of regular motorcycle social gatherings (like the aptly named The Moto Social), where the emphasis is as much on the social exchange as it is on uniquely styled motorcycles, many new riders are looking for bikes that make a bold fashion statement, even if those bikes offer a somewhat compromising ride. And that’s a role that fits the R nineT Racer perfectly.