Sometimes it takes a different perspective to see clearly.

“Do you take that bike off-road? I see you have the tires for it.”

I turned to see a bearded twenty-something following me out of the Florida Visitors’ Center. He was focused on my 2006 Suzuki V-Strom.

“Yes, and sometimes I even keep it vertical,” I replied (half) jokingly.

“Man, you are set up, with your panniers, tank bag, tent – You are living the dream!”

His words would stay with me a long time after I pulled out and back onto the interstate. Ordinarily, I avoid such arteries whenever I can. As John Steinbeck once prophesied, they make it “possible to drive from New York to California without seeing a single thing.” But I had limited time and miles to munch, so with head to the wind, I pressed on. My end goal was Key West, but for today it was Oxbow Trailhead, a free campsite near Dunnellon, Florida. I have always been interested in stretching my travel dollars, opting to camp over hotelling it, and learning to carry non-perishable food in my panniers to limit restaurant expenses. Now I was expanding my mission further, having discovered Freecampsites.net, a crowdsourced trove of free campsites from all over the U.S., complete with descriptions, ratings and filters, letting me zero in on sites that would be appropriate for travel by motorcycle. Oxbow turned out to be a gem with a clean space shaded by live oak trees with saw palmetto undergrowth. I unrolled my bivy sack on top of my Thermarest Luxury Lite cot while the water came to a boil on my new Coleman Dual Fuel 533 camp stove – another of my new frugal tactics. By avoiding restaurants altogether, I found I could cut food expenses by up to two-thirds. The 533 may be a bit larger than some of the best backpacking stoves available, but it can run on regular gasoline, making it unnecessary to carry extra fuel (and in a pinch, you could siphon fuel the other direction to help you limp your bike to the next fuel stop if you were to run short). 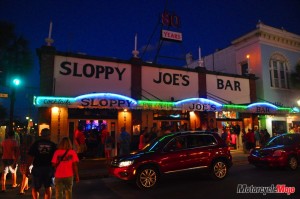 The next morning, I was up early and continuing on I-75 as the most direct route south. I certainly wasn’t using up any of the tread on the sides of my tires. However, I took advantage of the monotony to ponder life and the many road signs I was seeing. Here, I thought, context is everything. For example, End Construction (a rather short-sighted protest sign); Slow Children Playing (are the others too quick to hit?); Be Prepared to Stop When Flashing (you will be arrested); and, my favourite, Large Trucks Need More Space (as with the others, I got the intended meaning, but it sounded akin to something as obvious as Big Boys Wear XL, and I wondered how many government studies it took to come to this conclusion). Just for a break – and to escape the insanity in my head – I detoured to Anna Maria Island, south of St. Petersburg across Tampa Bay. I explored the many beach houses and cottages in town and walked out onto the white sand just to smell the salt breeze. Sunbathers looked quizzically at this man standing on the beach in full riding gear. As a Canadian, I’ve always thought it looks like a snowsuit.

Farther south in Naples, I was finally able to take secondary road 41, the Tamiami Trail, and begin to explore Everglades National Park. The Everglades, prior to drainage, was a web of marshes and prairies 10,000 square kilometres in size. Somewhat reduced by the creation of canals, landfill, and both urban and rural uses, the central feature of the glades remains: a river that is 100 km wide and 160 km long, moving at the incredibly slow rate of 30 metres per day. As I rode along, gazing out at this “River of Grass,” I was reminded of my childhood interest in Gentle Ben, the television show about a warden and his family living here, their prime means of transportation an airboat, which I thought was the coolest thing imaginable. I was drawn back from my reminiscence by the sight of the world’s smallest post office. The building was originally an irrigation shed hurriedly pressed into service by the local postmaster after a disastrous night fire in 1953 that burned Ochopee’s general store and post office. The tiny structure still serves the extremely sparse population in a three-county area, and also stands as ticket office for Trailways bus lines.

I was dismayed to arrive at the gate of Shark Valley Park just as it was closing for the night. I inquired about camping and was told the nearest grounds were 30 km back the way I’d come. With little choice, I agreed to return there. I reached out, turned the key, pressed the ignition and . . . nothing. After a couple more attempts, I recalled that sometimes the brushes in the starter can become worn just enough that they fail to rotate, and a gentle tap with a hammer can move them just enough to get you going. But that didn’t work. I was truly stuck. I then recalled that this year, for the first time ever, I had registered with CAA, so I called them with my problem. They were prompt to find a recommended repair shop with a hotel nearby and sent out the truck. However, I was in the Everglades, and it became a two-hour wait as daylight faded and the ranger left, and the volume of night sounds increased. I began to think about the warning signs I had seen for alligators, bears and panthers, but then I took comfort in the arrival of younger, more tender bicyclists who had come to ride the trails in the cool of the evening.

The tow truck driver and I were both a little concerned by the address we’d been given for the repair shop. It appeared to be an industrial mall where all the shops were behind pull-down garage doors, giving the unsettling impression of a crime-ridden area. But since I had no other option, I would have to leave the bike parked outside Voodoo Motorsports until morning. I said a little prayer as I removed every bag, duffle and farkle I could. At La Quinta Hotel, I made quite an entrance and took the last available room. 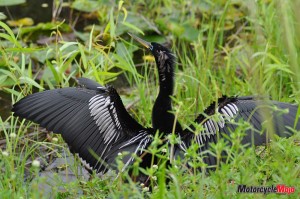 I was relieved in the morning to receive a return phone call from the shop saying the bike was in their way and could I bring the keys as soon as possible to unlock the steering column. “We’re lucky your bike is still out there,” Mike said. “Motorcycle theft is a real problem here. Of course, it wouldn’t have been any safer outside your motel room either. I would have done the same – but I wouldn’t have slept.” Despite having two other teardowns on the go, he immediately went to work thoroughly diagnosing my problem. In the end, a new battery and topped-up oil cost me $150. He even checked tire pressure and tightened a loose pannier bolt. “I believe in treating riders fairly,” he said, “and you’ve come a long way.” Such goodwill only strengthened my faith in the riding community, and by 10:30, I was on my way to Flamingo at the very end of Route 9336, again in Everglades National Park.

Riding from Miami to Flamingo, I witnessed the full spectrum of the Everglades’ landscape, from tropical hardwood hammocks to pine rockland and freshwater marshes, mangroves and other marine waters. The city of Miami is only about two metres above sea level, and even minor elevation changes bring distinct changes to the landscape. Amid the flatness of the slough, I enjoyed some ranger’s sense of humour: another road sign that read “Rock Reef Pass – Elevation 3 Feet.” Doubtless the lowest pass I will ever ride.

Thunderheads towered before me, and I took shelter in the visitors’ center. The dousing was over in minutes, however, and I continued on to my campsite. As it was the off-season, campers were few and payment was on the honour system. If ever I considered taking advantage of the system, this was not the time. Our national parks need all the support they can get, and somehow pay-it-forward was still in play from Voodoo’s generosity.

I then toured the Anhinga Loop, where I watched alligators leisurely stalking fish such as the plentiful Florida gar and birds such as the anhinga itself. As I cooked ramen (25 cents!) on my camp stove, I felt a sense of satisfaction here at the end of the road on Florida’s southwestern shore. Only the Keys could lead me farther south – and that was tomorrow’s goal. In the heat, I would have comfortably slept atop my bivy but for the hordes of mosquitoes that created an incessant whine in my ears. I was amazed to learn this was actually low season for them as well. In high season, I learned, old-timers used to say you could swing a pint cup and gather a quart of mosquitoes. 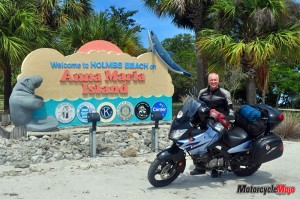 Riding Highway 1 from one island to the next the following morning, I discovered another distinct advantage to riding over driving: along the varying two- and four-lane route, the concrete barriers at the sides of the highway hamper the view from a car. From the seat of my V-Strom, however, I enjoyed open vistas of thickly treed mangroves surrounded by a vast turquoise ocean adorned in swirls and meanders of deep blue and green.

Arriving at Key West, I was surprised by the number of scooters there were for rent, and how many were in use. Apparently, it’s cool to drive your girl up and down Duval Street while those no longer sober enough to drive whoop to you from the open-air bars and restaurants that punctuate the T-shirt shops and art studios. Key West has a uniquely Cuban flavour, most obvious in the architecture of St. Paul’s Episcopal Church and the many cigar shops along the main street. This is not surprising, as Cuba is only 145 km south and travel between the two points was once open and frequent. In fact, it was by way of Havana that Ernest Hemingway came here in 1929, attracted by the possibility of big-game sport fishing. He purchased a house that is now a National Historic Landmark, one that I was able to tour, viewing the room where he wrote several of his best-known novels. Of special interest were the many cats that still live there, all of them with six toes, all of them descendants of a cat Hemingway received as a gift from a sea captain.

As I stood for the obligatory photo at the “Southern-Most Point in the Continental U.S.,” I thought back to my bearded friend at the Florida Visitors’ Center. Sometimes it takes another person to point out what you have missed. Though my days, like everyone’s, are made up of routine, challenges and concerns, in truth, he was right: “You are living the dream,” he’d said. Yes, I smiled gratefully. Yes, I am…