A century may not be a big deal in terms of the history of humankind as a whole, but for most of us alive today, it’s hard to fathom the changes the world has seen in that time. People have gone from riding horses and driving Model Ts to (allegedly) self-driving Teslas. Two World Wars have been fought, costing millions of lives. The advent of electricity and indoor plumbing in every home, so Dad didn’t have to take the newspaper out back and freeze. And the Deeley family business selling Harley-Davidson motorcycles in Canada has soldiered on the entire time. That’s right, Trev Deeley Motorcycles is celebrating a century of selling Harleys in Canada this year, making it one of the world’s oldest Harley dealers. 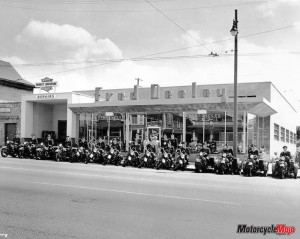 But it wasn’t always called Trev Deeley Motorcycles. Trev’s grandfather, Fred Deeley Sr., began selling Harleys from his shop on Granville Street in Vancouver. He had come from England several years earlier to enjoy the West Coast climate, and brought with him the rights to sell the rifles, bicycles and motorcycles of the Birmingham Small Arms Co. (BSA). But as the First World War heated up, BSA shifted its focus on the war effort, and Fred Sr., running short of product, had to look elsewhere. It wasn’t long before he took interest in Harley-Davidson, which had been winning races the past few years. Fred Sr. locked in the first dealership agreement outside of the United States in 1917, just before the end of the war. By 1920, H-D had become the largest motorcycle manufacturer in the world, and its models were sold in 67 countries. 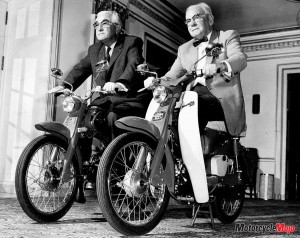 In 1925, Fred Jr. took over running the motorcycle business, while Fred Sr. maintained the bicycle business. Now, this was long before Sons of Anarchy, or even Easy Rider, so motorcycles were purchased as inexpensive transportation, and sidecars were a practical and popular option. Harley was a long way from becoming a “lifestyle brand.”

In 1928, presidential candidate Herbert Hoover promised that if he were elected, there would be “a chicken in every pot and a car in every garage.” But that didn’t quite happen. One year later came the stock market crash of 1929, followed by years of the Great Depression (everyone should read The Grapes of Wrath by John Steinbeck). So, it would be some time before automobiles would eclipse the popularity of a motorcycle with a sidecar rig, if one could even afford that.

Then came the Second World War. In 1941, the U.S. joined the Allied war effort and Harley-Davidson’s civilian motorcycle production all but ceased until the end of 1945. But through all this, the Deeleys persevered. It was during this tumultuous period that things got “interesting” for the business,
because along came Trev.

The son of Fred Jr., Trevor (they had to use his middle name, because they already had two Freds in the business) was a bit of a madman in his early years. He joined the family business in 1935, at age 15, as an apprentice. He began racing competitively at age 19 on his BSA 500 Star Twin, eventually earning himself an American Motorcyclist Association competition licence, becoming the first Canadian to do so.

And there are still some folks around who remember Trev from back in the day. In May of 1940, a local fellow named Ralph Weinstein purchased a brand-new 1939 BSA Gold Star single from Trev himself, for 12 monthly payments of $27.50. In fact, all three of the Gold Stars that were imported into Canada that year were bought by Weinstein and his pals who had formed the Royal City Rockets motorcycle club. “Ralph and Trev became great buddies,” says Weinstein’s son Rocky, who now has his father’s bike. It’s a great example of a one-owner survivor, and I was lucky enough to have a good look at the bike and a long chat with Rocky.

Weinstein and Trev were such good friends that Weinstein would act as Trev’s mechanic and pit crew at races as far away as Portland, Oregon, Rocky says, and if his father needed to borrow a bike, Trev would lend it to him – typical of the kind of generosity that Trev was famous for. 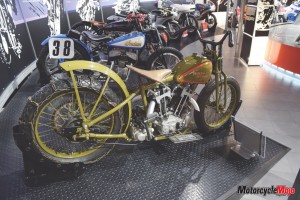 Trev’s love of racing and a competitive spirit took him as far as Daytona, and he eventually caught the eye of Harley-Davidson with his aggressive “elbows out” riding style. He became a factory rider in 1950, which was quite an accomplishment, especially for a Canadian. However, three years later, after experiencing the loss of a friend and fellow racer, as well as his father-in-law, who was killed while riding Trev’s own bike, it was time to retire from racing. By that point he’d won nearly 80 races, but he was a husband and father and had become general manager of Fred Deeley Motorcycles. Still, he never lost his love of racing and spent a lot of time socializing with and supporting other racers, including champions Yvon Duhamel, Barry Sheen, Steve Baker, Jim Allen, Don Vesco and Pete Kellond. At one point, he sponsored a total of 22 racers at Daytona!

In 1957, Trev had the foresight to become the first distributor of Honda motorcycles in the English-speaking world, after reading an article about a GI who brought one home following the war. This was a tough sell back home, with both his father and grandfather strongly objecting, due to feelings still fresh after the war. It wasn’t until Trev threatened to quit the business and take Honda out on his own that the two Freds relented.

The Hondas were a boon to the Deeley business. They flew out the doors and were soon back-ordered. They appealed to a completely different demographic than the Harleys, giving Deeley a far broader market share. Things were looking great until relations between Trev and Honda started to strain, with Honda pushing to open dealerships in locations that, in Trev’s opinion, didn’t make sense. He still saw the value of Japanese bikes in Canada, so before letting go of Honda, he had Yamaha on the hook. Trev’s business savvy was a big reason Japanese bikes gained such a strong foothold in Canada so early – back when you met the nicest people on a Honda.

Just as things were wrapping up with his Japanese business, Harley-Davidson approached Trev in 1973 to become the sole distributor for Canada, which he accepted, under the name Fred Deeley Imports Ltd.

The Vancouver dealership was renamed Trev Deeley Motorcycles in 1975, when Trev and his partner Don James purchased the retail portion of the business from Fred Deeley Imports. This called for a road trip! Trev, his second wife, Joyce, and James and his wife rode across the country to drop by every Harley dealership and say hello. Now that’s commitment. And in 1985, Trev was invited to serve on Harley-Davidson’s board of directors.

“It wasn’t just selling Harleys that led to Trev’s success,” says Brent Cooke, curator of the Deeley Exhibition, which shares space with the dealership on Boundary Road in Vancouver. “The success of Deeley was in distribution of anything that would make money. Honda, Yamaha, Guzzi, Norton were all part of the business at one time or another. Trev was famous for saying ‘It doesn’t matter what you ride, just as long as you ride.’” Cooke also alludes to Deeley’s variety of ventures: “They also have property investments and other business.” Many of those operations continue to thrive under Deeley Group – and some familiar leadership. In 1976, Malcolm Hunter joined the Deeley family, and by 1982, he’d become a partner and vice-president. Hunter is currently the long-standing president of the Deeley Group, alongside chairman and CEO Don James. These are two of the most significant people behind the success of the Deeley name in the last 40 or so years, and they continue to be among Vancouver’s most respected business leaders.

This business acumen made Trev a wealthy man, and he shared his good fortune, becoming known for his generosity. In 2001, after losing Joyce to ovarian cancer, Trev donated $1 million to the BC Cancer Foundation’s “Daring to Believe” campaign for the construction of a research centre on Vancouver Island in her honour. Trev passed one year later at the age of 82 and left more than $5 million of his estate to create a permanent endowment supporting cancer research.

These days, the most significant aspects of Trev’s legacy for us gearheads are the Deeley Exhibition and Trev Deeley Motorcycles, which exclusively sells Harley-Davidsons, and has opened a Harley-Davidson Custom Shop as part of its operation.

The exhibition, though, isn’t exclusively H-D. “We have 57 brands of motorcycles here, with about 275 bikes in total,” Cooke says. “Only 65 to 75 are on display at any given time, in themed exhibits.” The current theme is, rather appropriately, “100 Years of Motorcycling.”

I was treated to a personally guided tour of the exhibit by the affable Cooke, who took the time to point out some of the more relevant displays. One of the true gems is the Nova Project bike, a V-4 liquid-cooled monster that Harley experimented with circa 1980. There were only six to eight of these known to exist in the world. One day, a group of Harley bigwigs were in town and wanted to tour the facility. “They weren’t too happy to see that here” Cooke says. “They didn’t know that Trev had it!”

So, where might the other 200 or so bikes in the collection be? In a secret, secure location, of course. “We don’t necessarily want everyone to know what we have and where it is . . . Would you like to see it? I’ll just ask that you don’t take any photos,” Cooke offers. Now, I can’t tell you what I saw, or where I saw it, but it was awesome times 10! A cavern, with bikes stacked three-high on shelving. An incredible collection of absolutely beautiful bikes, spanning the entire history of the motorcycle, all resting quietly, draped in virginal sheets, until being called upon for future exhibits. Many are runners. I have to admit, I did feel a bit like I was in a place of worship. We spoke in hushed tones and a moment of silence was observed.

And Cooke did allow me to photograph one bike. He graciously rolled out one of the three infamous “Trevsters.” This was a personal project of Trev’s. He was a diehard Sportster fan, having raced and run them for years, but he felt that they could be improved by rubber-mounting the engine and giving them a larger tank. Harley-Davidson didn’t listen, so Trev went into his laboratory and made his own to show the Motor Company what could be done. All three Trevsters were right in front of me. Apparently they had some impact, as it seems Harley does rubber-mount many of its engines to this day.

But now with 100 years under its belt, what lies ahead for Trev Deeley Motorcycles? General manager since 1991, Darwin Osarchuk speaks of how grateful and respectful they feel toward their core customers. Deeley Motorcycles will always support those who have been loyal to the sport and the brand. “But we know we have to change, too,” Osarchuk says. “Harley-Davidson has publicly announced it intends to bring 100 new models to market over the next 10 years. That’s very exciting, especially for the under 35-year-old segment in our urban marketplace, with their adventurous lifestyle. Our staff consists of passionate, dedicated, long-standing and experienced people, complemented by new, younger staff who are excited to bring forward their ideas and passion for the future. It will be them who will be our new leaders.”

Osarchuk reveals they “plan to have a rider training school to bring more people into the great sport of motorcycling. And we will continue to grow our business, one customer at a time, for the next 100 years.”

According to Osarchuk, Trev used to say, “That’s really neat, but what’s next?” Looks like Trev Deeley Motorcycles has that covered.