It was just going to be a ride to Ontario – at least that was the original plan. Then I sent a message off to the Canadian Army Veterans Motorcycle Unit in Nova Scotia (2 CAV), asking if anyone there would be interested in accompanying me. I soon discovered a number of members were heading to Rolling Thunder in Washington, D.C.

This was a ride that’d long been on my bucket list, so I asking if I could join them. And that’s how Tom (Ironside) Skelding, Paul (Trapper) Cane, Chris (Red) Hatton, Earle (Grizzly) Eastman and I ended up in Grizzly’s garage in St. Stephen, N.B., the day before starting out for Rolling Thunder.

In the interests of full disclosure, I’m an “Old Soldier,” but not Army, rather, an old Navy pilot who also flew with the CAF (before it became the RCAF again), and was paid by the army to jump out of air force aircraft.

We were a mixed bag of beards, bellies and moustaches, aboard Harleys, one hack (sidecar rig) and one beautifully memorialized Yamaha. We left in bright sunshine with Tom leading, guided by his trusty GPS “Samantha.” The U.S. authorities unwisely granted us passage, and we had a perfect ride to our night’s stay at the Days Inn in Sturbridge, Massachusetts. 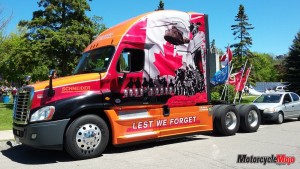 Rain greeted us the next morning, but we were well prepared, and off we rode with Tom and Samantha in the lead. When travelling south, my preferred route is I-84, as it avoids the traffic associated with New York City. So that’s where we headed, with an ETA of 2:30 p.m. for York, Pennsylvania, and the Harley-Davidson plant. That is, until, in the driving rain, Samantha decided to reroute us via I-91 and then off the highway at Exit 14 into the bowels of New York City.

Unfortunately, as we braked for the turnoff, Grizzly downshifted and locked up his rear wheel, and suddenly I was looking at his bike beam on and 90 degrees to his trailer in a slide. Grizzly was flung from his motorcycle, landing right in front of me in a very classic MotoGP backslide, with arms and legs up and out of danger. At that moment, my internal cry was (a) “Don’t let it happen to me!” and (b) “Don’t run over Grizzly!”

Tom continued around the off-ramp, totally unaware of the scene behind him, while I managed to get stopped just past Grizzly, who was slowly spinning to a stop. Red (behind me) immediately blocked traffic to protect Griz, and Trapper (in the hack) pulled up beside Grizzly’s trailer (upright and undamaged) and his motorcycle (upside down and definitely damaged). His Harley ended up like a turtle on its back, resting on the trunk and handlebars. In true New York fashion, the driver of the first car to stop asked where he could find a restaurant.

Grizzly was okay and was soon calling for a tow, noting that we were at Exit 14 on I-91. I was quite amazed, given the accident and the poor visibility, that he was aware of the exit number until I realized he was standing on the downed sign (he didn’t do it). We were joined in short order by a State Highways truck, two of New York’s finest (who looked very much the part), one fire engine and, eventually, a tow truck.

With the bike loaded and Grizzly on board, already making a list of needed parts in his head, the tow truck departed, leaving Trapper, Red and me wondering 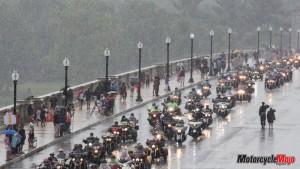 how we could find Tom, since we’d totally gridlocked traffic in this part of NY State. Our search was fruitless, given Tom’s approximate location – “I am at a Dunkin’ Donuts!” – and finding ourselves in the Bronx under the elevated highway, we decided that discretion was the better part of valour and programmed in the nearest entrance to I-95, which turned out to be the George Washington Bridge (six lanes, two levels).

Our problems were not over, as, having left Grizzly behind and abandoning our search for Tom, Trapper now found his old Harley overheating in the heavy traffic. Red and I continued to slowly advance, planning on pulling off where we could wait for him, but no such luck; traffic was six lanes wide and creeping to a stop. Strangely, there was absolutely no traffic in the opposing lanes. However, the answer soon became evident: way off in the distance was a sea of flashing lights. We sat and watched as our side continued to compress without moving beyond the sea of lights – for three hours!

It turned out that Homeland Security was doing a suspected terrorist roadblock in the opposing lane, and as we crept by hours later, they were still blocking that direction with three armoured trucks while heavily armed SWAT types were inspecting a vehicle. But we were finally through. The rain had let up, but we’d now lost Trapper. Our merry band was down to just two, with my GPS leading the way.

It was getting dark, and as we looked for our exit at I-276 to take us west to York, the skies opened up again. We rolled through construction zones in the dark and the rain, placing complete faith in the same type of instrument that got us into such a fix to begin with. 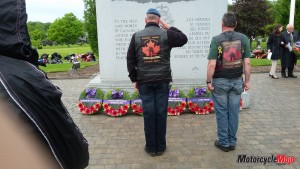 I can’t say I’ve ever had a more unnerving ride, but the rain eventually let up. We took breaks as necessary, and at 11:30 p.m., pulled up to the Days Inn in York. There, we found Tom standing on the corner waiting. He informed us that Trapper was just over eating supper. Yep! When his bike cooled and he realized the enormity of the traffic jam, he backtracked and took another route, beating us to the inn. Word from Grizzly was that he was already on his way back to New Brunswick with his damaged bike and trailer in a U-Haul – there’s something remarkable about how these “grunts” handle a problem.

The next morning, after an excellent “Steel Toe Tour” of the Harley-Davidson assembly plant, we four headed to Washington, D.C., to join the reportedly one million other motorcycles gathering for Rolling Thunder to demonstrate support for those soldiers who are still missing in action (MIA) or prisoners of war (POW).

The major function of Rolling Thunder is to publicize the POW/MIA issue; to educate the public that many American prisoners of war were left behind after all earlier wars; and to help correct the past and to protect future veterans from being left behind should they become POWs or MIAs. The current energy behind Rolling Thunder, which is both an event and a riding club, is Sgt. Artie Muller, U.S. Army Ret.

People may not understand this issue, but until those behind Rolling Thunder began to push for action, a number of servicemen lost in the Korean and Vietnam wars had never been accounted for. With the push from Rolling Thunder, there was a renewed effort to locate and identify remains of MIAs and repatriate them back to the U.S. and to their families.

The final ride to the Airport Holiday Inn was a mixture of picturesque small towns and Friday holiday traffic trying to get out of D.C. The hotel was close to the Pentagon, the staging site of Sunday’s ride, and just across the street from the ride’s headquarters. Ironically, the streets here were strangely quiet, but that was soon to change as thousands of riders began converging on Washington from all across the U.S. and Canada.

Saturday, we took advantage of the lull to visit The Vietnam Veterans Memorial Wall and Arlington Cemetery. The group wanted to place a memorial on a CAV relative’s grave, and Red wanted to see his uncle’s name engraved on the wall.

Sunday, we were up at 5:30 a.m. to get ready to position ourselves at the Pentagon for 7:00, when the parking area opened. Motorcycles would arrive for the next five hours. At noon, groups of riders would be released for the ride over the Arlington Memorial Bridge, past the Lincoln Memorial, down Constitution Avenue, across in front of the Ulysses S. Grant Memorial and up Independence Avenue on the south side of The Mall. The release of riders would continue for some four hours.

On completion, riders would be allowed to park on grassy areas of The Mall and gather to participate in the speeches, music and demonstrations that were to follow the ride. I was looking forward to seeing the crowds lining the street and especially to pass by a man who is a courageous and beautiful part of the ride. Since 2002, Marine Staff Sgt. Tim Chalmers has stood at the corner of Constitution Avenue for three to four hours saluting the riders of Rolling Thunder. But, as this trip has proved, plans go astray.

It was a beautiful day as the parking lot filled and various helicopters kept watch overhead. The participants ranged from children to some very old veterans and supporters. As noon approached, I was anxious to see how you communicate with hundreds of thousands of bikers to tell them that the ride has started. Simple, you have a giant B-52 bomber make a pass over the assembled bikers.

Flagmen gave the “GO!” signal to the various rows, starting with more than 100 motorcycle-mounted police. As the flagman got closer to us, the skies began to darken, and as we started off, they opened up with heavy rain that was to continue for the rest of the afternoon. The “relaxed” cruise along The Mall was at speeds varying from 20 to 80 km/h in driving rain. Every time I tried to take in the crowd lining the road, it would almost result in disaster. At one point I looked up, and there in the rain was my hero, Staff Sgt. Chalmers, but I barely had time to chop off a salute before I had to get on the brakes as everyone ahead abruptly slowed.

When we came to the end of the route, the wet conditions prevented the use of grassy areas for parking, and we found ourselves blocks away from the location of the ceremonies. In the end, we returned, soaking wet, to our hotel rooms, and after a hot shower and a rum, we were very happy to watch the remainder of the very touching Memorial Day presentation from our rooms.

In the morning, we packed our gear and headed north to Buffalo. The merry band was to go our separate ways for a few days before reconvening at the National Air Force Museum in Trenton, Ont., to participate in the 9th annual Heroes Highway Ride & Rally, and the next day take part in the Birth of a Nation Ride that left Old Fort Henry in Kingston, both of which pay homage to our veterans, serving members and country.

Rolling Thunder and the Vietnam Veterans Memorial in Washington have always been very important to me because of personal ties; having served as a Navy pilot in the RCN during the Vietnam era, there were several occasions when I sat having drinks with someone who was on his way to that conflict the very next day. And at that time, many of our U.S. Navy compatriots had flown combat tours from U.S. aircraft carriers in Vietnam.

Sharing this ride with my brothers from the CAV was a pleasure, and it taught me a lot about the brotherhood of soldiers. It’s very different from the Navy and the Air Force; we deal with the threat at an impersonal distance, while the grunt walks down a street surrounded by the threat, and the only equipment he has are the weapons carried by the friends ahead and behind him. No wonder they come so easily into this brotherhood of bikers.