Any training has the potential to improve your riding skills, but being safer in the corners takes a special kind of instruction

The day begins at 7:30 a.m., with about 30 of us standing in line for registration, silently assessing one another: one or two are cocky and sharing their vast riding experience, some appear a bit nervous or humble, and others are quietly confident. I’m in that last set, although most are likely wondering what the heck I’m doing here. At any FAST school, there are men and women, ages ranging from teenage to very mature, and today, there is a 68-year-old fairly immature woman, which is me. 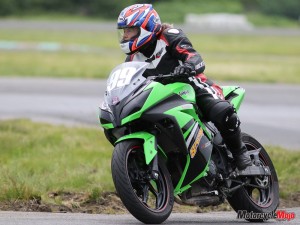 During registration, we are asked to sign a liability release and to decide which group we feel we should be slotted into – Group 1: most experienced and fastest; Group 2: experienced; or Group 3: fairly inexperienced. Most who have any riding under their belt wish to be in Group 2, including me, but I elect to be in Group 3. I have heard it’s a tiring day, and I would rather be ahead of the game than behind it. Also, Group 3 is led by Dan LeBlanc, the instructor I know best. Registration is also where riders are encouraged to purchase the available insurance. As safety-conscious as this course is, it isn’t often that a day goes by at FAST without someone taking an off-track excursion. It is extremely rare that the on-site ambulance is required – and even then, it is typically a collarbone break or slight concussion – but the damage to a bike can be extensive, and very expensive without the insurance.

Paperwork done, we are sitting at round tables when Michel Mercier joins us. A slender, fit man, Mercier has many years’ experience racing on dirt, ice and road in Canada, the U.S., Europe, Australia and Japan. An inductee into both the Canadian Motorsport and Motorcycle Halls of Fame, riders from across Canada who have grown up with his poster on their bedroom wall take his course. This time around, there is a rider attending from Singapore. 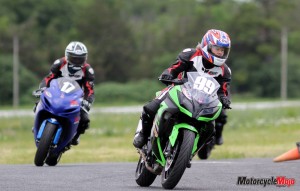 Mercier’s briefing covers safety, track rules such as how and where to enter and exit the track, and the essentials of street and track riding. He will continue to instruct throughout the day, preparing riders for their next session on the track, asking for focus on a particular goal. He injects some humour, but this is serious business for Mercier. He cares deeply about riders being safe, and takes it personally if someone crashes. His first briefing will last around 60 minutes, and then those who do not have their own approved clothing head off to be fitted with helmets, leathers, gloves and boots. You may use your own bike and riding gear for the FAST course if it passes an inspection to ensure it is track appropriate. However, there is no insurance available if you are not using a school bike. Most riders wisely choose to use the school bike and gear, and to purchase the insurance.

The school motorcycles are current Yamahas, Kawasakis and Suzukis, and range from 300 cc to 650 cc. Although I would like to use a bike with more grunt, I elect to use a Ninja 300, because it will handle most like my Honda CBR500RA.

Once leathered up, we meet in an outdoor classroom where a further briefing is given by Mercier, who introduces the track layout, flags and procedures; then we head to the grid to claim our bikes and meet our instructors. There is one instructor per group and up to 12 students in each group. While one group is on the track, the other two are receiving either class instruction from Mercier or individual assessment on the previous track session from their instructor. There are seven sessions on the track throughout the day, each with three parts: a briefing from Mercier covers what to practise and focus on, followed by riding on the track, and then a debrief from the instructor, who will advise where improvement should be made. 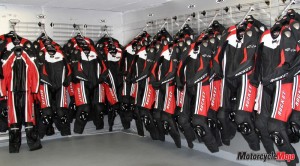 During the two follow-the-leader sessions in the morning, the students will switch positions to ride behind the instructors, so each student’s ability can be assessed, ensuring each one is in the most suitable group. It’s also a time for students to become familiar with their bikes and the track layout.

When directed to start the bikes, mine will not start. Hey, a special thank you to whomever of the FAST folks decided to hit the kill switch. They all love to tease. Instructor Sean Huffman, the kindest of the lot, leans over and resets the kill switch before my cone of confusion becomes too obvious.

Everyone at FAST knows me, but none have seen me ride. I should be a bit nervous, but oddly, I’m not. I will spend the day stuffing my competitiveness deep inside me. I bought the insurance, but I do NOT want to drop this bike, despite the fact my replacement photographer specified he is looking forward to some crash photos of me. He will arrive at noon, so I am covering the morning static photography. Consequently, I miss some of the briefing and later realize I have been hogging the track, and not quite understanding the switching of positions behind the instructor – and at this point, I would like to apologize to everyone who was in my group!

I find the 300 cc less throttle-responsive than my Honda, and there is a rev limiter that I was not expecting, but other than that, it feels the same. I initially follow instructor Jean-Marie Pesci, and stay within the space that is marked with cones or half tennis balls; between sessions, these markers are moved to tighten the lines as we gain speed. As someone who has ridden for decades without company, happily using the whole lane on the curves, swaying to the music playing in my head or helmet, having to actually use a proper line is somewhat restrictive, but I’m here to learn. After nine minutes, our group pits to give the school bikes to the next group while we receive further instruction from Mercier.

For the second round of follow-the-leader, I am behind instructor Martin Hamel, and following his debrief around noon, there is a 45-minute break for lunch. There is a canteen, although a few riders have brought their own lunch. The friendly chat runs to what you would expect: what type of bike we own, where we live and what our riding experience is. I spend part of my lunch setting up my replacement photographer with my gear for the afternoon track shooting.

The first afternoon session is brake and downshift, where, in five designated sections, riders are to accelerate and upshift twice and then downshift twice to stop either at a cone or by one of the two instructors on the track. This exercise is to practise and be assessed on several things, including how and when you are braking and shifting, your position on the bike, and making sure you are not using the back brake. There are two laps to give you the opportunity to correct by the second round what the instructor told you after the first round. I figured I would be pretty much a whiz at this. Instructors Huffman and LeBlanc assure me I am not. My habit of tapping the back brake will be tough to shed, along with a multitude of other issues.

Two free sessions on the track follow while the instructors head out to various corners to assess each student. Let us just say, without admitting personal culpability, that the following debrief can be a tad humbling if you are not improving. Let me also add that you can teach an old dog new tricks. Or at least these instructors can.

The fourth afternoon session is a final follow-the-leader, and most students will show significant progress from the day’s instruction. I am placed with Huffman, and I am ripping much faster than any other session that day, but with the speedometer and tach taped over, I can’t see the number. But it had to be at least 200 km/h, probably really more like 300 km/h, right??!! A last free session ends the course, at around 4:30 p.m.

There is a final rider debrief by the instructors, followed by a meeting in the classroom where Mercier presents each rider with a FAST certificate. A certificate from both Phase 1 and Phase 2 qualifies a rider to buy a race licence. Each instructor then presents a Top Rider Award to the most-improved student of the day. No surprise, it isn’t me; changing my position on a bike after four decades of riding is tough to do in one day. But I will say that my constant riding on my local twisty roads ensured that I was not tired after the course, which is pretty cool for a woman my age, given most riders are very tired. Huffman, however, expresses his belief that I just wasn’t working hard enough. Maybe – but I was not the slowest rider there. That I do know, Sean!

As a twisties lover who puts over 10,000 km on my bike every year, along every curvaceous road I can stuff into a day, I had resisted the track. I have always ridden fast enough that my track friends ride with me, so I did not see why riding any faster was necessary; and with decades of safe riding under me, I did not feel I had much to learn.

I was wrong on everything, and that is not something I am used to admitting. FAST taught me to get my butt somewhat off the seat and to work at fine-tuning other parts of my body. I have a better grasp of the best line on corners, I now know my tires have way more grip than I thought and I gained confidence I never knew I lacked. And I learned it was not (necessarily) about going faster – it was about being the safest and most effective at the speed at which I already ride.

The photos of me show exactly what everyone else sees when they view their photos – none of us are leaning as much or are off the bike as much as we think we are. But at the end of the day, I know what a great gift FAST has given me. The course was terrific fun with excellent instruction, outstanding riding and hours in the company of riders who share my passion. I have a lot to work on, and I will. Meanwhile, I have come away with great memories, and I am a better rider.