The newest Scout has enough attitude to make city riding a blast.

Those familiar with Los Angeles know that between the smog, the crowds and the suffocating traffic, the concept of a perfect day is pretty far-fetched. Sure, the weather is almost always ideal, and yeah, there are palm trees, beautiful people and perfect sandy beaches, but getting around the city’s maze-like sprawl is excruciatingly painful, unless, of course, you’re on the right motorcycle.

That I ended up testing Indian’s latest entry into the shape-shifting cruiser class, the Scout, a bobber version of its popular midsize model, in L.A. was no mistake. This bike is perfectly suited for city riding, and only partly because of its compact size, light weight and off-the-line acceleration. The Bobber’s dark tones, predominant V-twin engine and low-slung chassis give it a fists-drawn look, like it’s ready for a fight. Attitude. That’s what this motorcycle is all about. 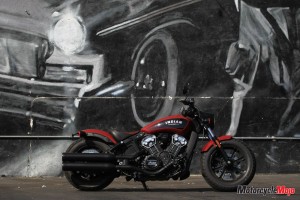 It’s been a year since Polaris pulled the plug on its Victory motorcycle line, a forceful move that broke hearts, but also cleared the way for a concentrated Indian-centric effort by the billion-dollar company. The Scout, released in 2014, echoes the original Indian brand’s second-most famous model (the Chief being its first), and is also an example of an industry-wide pivot away from the bigger-is-better concept that has driven the cruiser market for decades to the more energetic, more efficient and more affordable mid-market category. Out of the gate, the Sportster-assailing Scout enjoyed positive reviews and healthy sales figures, as well as excited speculation about future renderings.

The first variation was the Scout Sixty we saw last season – an even more affordable entry-level option, which is basically the standard Scout, but with five gears instead of six and, engine-wise, thicker cylinder sleeves, which lower overall engine capacity from 69 to 60 cubic inches, and decreased horsepower from 100 to 78. Aside from those mechanical modifications and a few finishing details, the biggest difference is the Sixty’s enticing price tag: $10,999, compared with the Scout’s $14,499.

Then, along came the Bobber, a badass black sheep that goes for the same price as the standard Scout. 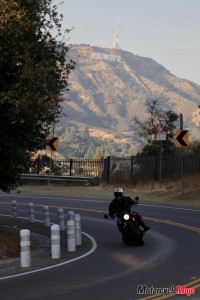 The Bobber has been stripped down and heavily restyled, from the clean, black headlight nacelle to the rear LED lights with integrated brake and turn signals that replace the Scout’s traditional light. A completely new rear sub-section creates the slammed profile while taking 25 mm from rear suspension travel; and, of course, those namesake clipped fenders that make the bike’s tires look super-fat and aggressive, though they are the same Kenda’s that carry the Scout.

A motorcycle with such hunky good looks is truly the perfect mount to cruise around Hollywood, but first I had to get it there. Unfortunately for me, that meant an hour and a half of agony on a series of Southern California freeways, which, if not stuck solid with traffic, are a never-ending scene out of Fast and Furious, only here, F350s and Corollas with bald tires are dicing with the Ferraris.

The handlebar on the Bobber is low and forward, which looks hot as a styling element, but creates an awkward stretch. Couple that with the intention-appropriate forward-mounted foot pegs and your body basically becomes a spinnaker at freeway speeds. It’s a great core workout, but not very pleasant. I was relieved when the speeding masses were finally funnelled into stop-and-go traffic closer to the city, because down there in California, where splitting lanes is not only legal but encouraged, the Bobber was sure to shine.

And sure enough, the newest Scout slid through stopped traffic like a hot knife through butter. While the rest of North America doesn’t yet enjoy legal lane splitting, testing bikes in this circumstance tells much about a bike’s low-speed manners. Here, the newest Indian was indeed a star: lean, agile and torquey. The only caveat – and it’s a minor one – staying aware of the how far the black bar-end mirrors extend the length of the handlebar. The stylish mirrors can be attached upward or hanging down from the bar. I prefer them on top to make more room in the compact seating area for my knees. 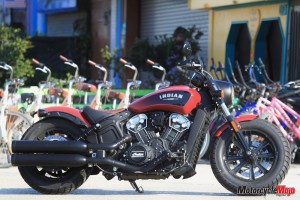 Finally, the Hollywood sign appeared above me, high on the summer-blond hillside, nine jauntily spaced letters that advertise an enduring illusion even more than they describe a place, or even an industry.

Straight off the freeway I throttled the Scout Bobber up into the star-studded Hollywood Hills and onto notoriously twisty and pitted Mulholland Drive for a bit of fast-cornering fun. Despite bringing such a short-travel package to the game, the new Scout squats sportily through corners without bottoming. In fact, I’d say that despite losing 25 mm over the standard Scout’s shocks, the Bobber’s new setup offers a more compliant ride.

However, the Bobber is a low-slung character and will remind you of this when you heel it over by lightly dragging the peg feelers. Lean it over far enough and you’ll say hello to a hard part, and I can say from experience that if you hit a good bump in a fast right-hander, it’s possible to knock the Bobber’s exhaust bracket hard enough to lever the chassis right off the pavement.

These ground clearance issues are to be expected, however, and really no fault of this style-driven motorcycle. You don’t expect a body builder to be good at ballet, right?

I was up in these hills because I wanted to solicit the opinion of the only celebrity I know, TV and film actor Perry King, who’s known as much for his passion for motorcycles as he is for his vast scroll of IMDb credits. King is not your average enthusiast. He’s never been into the latest and greatest, caring about a bike’s character above all else. Almost all of his 30-plus motorcycles are vintage or antique, but something about this brand-new Bobber caught his eye.

I arrived at his Hollywood Hills home to find him dressed for the part. From the retro-style lid and goggles right down to the knee-high leather boots. Like everyone, King was right away smitten by the Bobber’s aesthetic: the meaty look of the exposed Kenda tires, the pert solo saddle and the sheer flex-appeal of the V-twin.

We took off toward Sunset Boulevard and the beach with King delighting in the Bobber’s powerful acceleration while I lagged behind on his 1970 BMW R75/5. He said later he was wishing for red lights, just so he could tear away again. For scrubbing all the speed so quickly built, the Scout’s single disc up front is adequate, but better off used in concert with the rear disc. Sadly, ABS is only available on the Thunder Black Smoke version of this bike (add $1,000), so we were not able to examine its effectiveness.

Eventually, the glitz of the Sunset Strip’s main drag faded and the road began to flow into the loose sweepers that etch a border dividing Beverly Hills’ commercial district from its mansion-stern residential streets.

King said his favourite thing about Indian’s new Bobber was how inviting it is to ride. He liked the combination of the seamless power and neutral handling that makes the bike accessible to beginners, but still really enjoyable for seasoned riders. And while he did admire the bike’s slammed styling, he felt the resulting lack of ground clearance and awkward reach for the controls were too much of a trade-off.

King also appreciated the no-frills aspect of the Bobber, including the unassuming black-face analogue speedo pod, which through a decent-sized window offers the bike’s vitals: digital tach, odometer, trip meter, engine temp and low-fuel lamp. Certainly some will find simplicity to be a positive element of this cruiser. I also like the vintage look of the black pod, but would prefer a bit more information, at least air temperature and a fuel gauge.

Eventually the actor split off for a film studio appointment and I reclaimed the Bobber and headed toward Muscle Beach.

Working out on the beachfront just off the Santa Monica Pier has been a thing since the 1930s, when the fitness boom was just budding. Regulars likes Dave Draper, Larry Scott and Arnold Schwarzenegger made it famous in later years. When I arrived on the Bobber, guys working out there literally stopped what they were doing to come over and check out the bike. These guys who relish being seen all said this was a bike they’d like to be seen on.

And that’s pretty much what it comes down to. The new Scout Bobber is all about the outward aesthetic. Niceties like ground clearance and comfort take a back seat – if the bike had a back seat – to image. But that’s not to say the Bobber isn’t practical. In its element, it’s super-fun to ride, making it a tempting option for commuting or even a country road day tripping. The Bobber is also a natural as a second bike.

When I finally rumbled away from the palm trees and the golden beach and those sun-tanned body builders, I felt weirdly happy, as if I might have enjoyed myself riding around Los Angeles. I spent 15 years living in this city and only now, thanks to the new Indian Scout Bobber, I see just what it is a perfect day requires.

All you need is a bike that makes you want to stay in the city instead of leave.