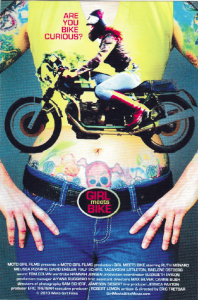 First, if you love Moto Guzzi’s, you’ll want this in your collection. There is a lot of time devoted to lovingly portraying the ‘91 Moto Guzzi 1000S that Kat (the “girl”) learns to ride. There are other delectables, including old Nortons and Triumphs.

Writer-director Eric Tretbar has created a beautiful-looking film, set in rural Minnesota, with a slightly overwrought storyline. Ruth Menard, as Kat, is a free spirit who won’t be controlled by any man, and trades in a more “traditional” life when she falls in love with the Guzzi. Perfectly understandable. Her many tattoos and overall look clearly send the message that she is counterculture, but frankly, she comes across as a bit of a brat, being manipulative and free-spirited often at the expense of those around her – others, though, may think she’s just a strong woman doing her own thing.

Made in 2013, the film nicely captures the feel of small-town and country riding with beautiful photography and sound. It’s shot in an intimate fashion, making you feel almost as though you were a watching the scenes in person. It gives the movie a nice feel, and the musical soundtrack is well chosen.

With much time devoted to riding scenes, the film does a fine job of portraying a slice of modern motorcycle culture.

Girl Meets Bike can be purchased on DVD for US$20 from girlmeetsbikemovie.com.